Daughter of Catalan-Jewish [3] immigrants who moved to Cuba, her father was a tailor and her mother was a seamstress. [4] Olga Guillot was born in Santiago de Cuba, and her family moved to Havana, Cuba when she was five years old. [2] As a teenager, she and her sister, Ana Luisa, performed as the "Duo Hermanitas Guillot." [2] It wasn't until 1945 that her talent as a bolero singer was discovered, when Facundo Rivero, an influential man in the Cuban music scene of the era, heard her sing for the first time and helped her make her professional singing debut at a famous Havana night club. Soon after, Guillot met Miguelito Valdés, who took her to New York City, where Guillot was able to record her first album with the Decca label.

She first achieved international fame in the United States with her version in Spanish of "Stormy Weather" in 1946. [4]

Guillot traveled to Mexico in 1948. There, she established herself as an international singer and actress, appearing in various films and making her second album. In Mexico, Guillot began to enjoy much popularity for the first time in her career.

In 1954, she recorded her song "Miénteme" ("Lie to Me") by the Mexican composer Chamaco Domínguez, [2] and which became a huge hit across Latin America and earned her three consecutive awards back home in Cuba as Cuba's best female singer. [5]

1958 proved to be an important year for Guillot, as she toured Europe for the first time, performing in Italy, France, Spain and Germany. She sang alongside the legendary Édith Piaf [6] at a concert held in Cannes. [5]

Olga Guillot kept a house in Cuba as she traveled around the world, along with her house in Mexico. But Guillot opposed Fidel Castro's regime, and in 1962 she decided to leave Cuba for good and establish herself in Venezuela. Not long after that, she left Venezuela, making Mexico her only permanent country of residence. [6]

Meanwhile, she kept touring around the world, singing in places such as Israel, Japan and Hong Kong. In 1963, Guillot was given the Golden Palm Award as "best bolero singer of Latin America." She received the award in Hollywood, California. Guillot sang in 1964 at New York's famed Carnegie Hall, becoming the first Latin artist to sing there. [2] [5] During her career, she performed alongside superstars of music such as Frank Sinatra, Sarah Vaughan, and her close friend and fellow Cuban exile, the great Celia Cruz. [7]

Guillot continued touring for the next forty years, releasing over fifty albums and winning numerous awards for her achievements in the music world. She was very good friends with Celia Cruz, [2] whom she often referred to as "(her) sister". When Cruz died from cancer, Guillot was very bereaved over the loss of her close friend and compatriot. She was the godmother of singer José José. Guillot lived mainly in Mexico and had another home on Miami Beach, Florida.

On July 12, 2010, she died of a heart attack [6] at the age of 87 in the city of Miami Beach. She is survived by one daughter, Olga Maria Touzet-Guillot, born from her relationship with pianist and composer, René Touzet. [2]

Please note that the dating information was obtained mostly from The Cristóbal Díaz Ayala collection at FIU and from the original recordings when available. The discography is not complete as there are other recordings and reissues outstanding. Updated September 2, 2017.

Danny Rivera is a singer and songwriter born in San Juan and whose career spans nearly 50 years. He is well known in Puerto Rico for his political activism. In 2008, Rivera acquired the Dominican Republic citizenship. After 12 years of work Danny Rivera and Nelson González in 2014 finished work putting new life into the classical bolero - in Spanish. Latin Luminaries Danny Rivera and Nelson González Hit the Heart of the Latin American Song Book on Obsesión 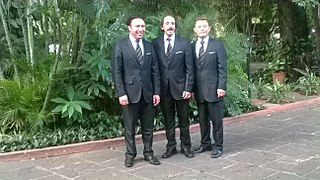 Los Panchos are a Latin trío romántico formed in New York City in 1944 by Chucho Navarro, Alfredo Gil and Hernando Avilés. The trio became one of the leading exponents of the bolero and the romantic ballad in Latin America. Its current members are Chucho Navarro Jr., Eduardo Beristian and Misael Reyes. 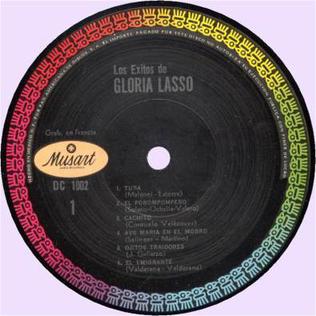 Discos Musart is a Mexican record label founded in 1948. It is headquartered in Mexico City and remains one of the country's biggest labels, focusing on Mexican music, as well as international releases licensed from various labels around the world. Over the years it has had several imprints such as Trebol, Oasis and Balboa Records. During the 1950s, Musart distributed albums by Cuban label Panart in Mexico.

Guillermina Jiménez Chabolla, known professionally as Flor Silvestre, is a Mexican singer, actress, and equestrienne. She is one of the most prominent and successful performers of Mexican and Latin American music, and is a star of classic Mexican films. Her more than 70-year career includes stage productions, radio programs, records, films, television programs, comics, and rodeo shows.

La sentimental Flor Silvestre is a studio album by Mexican singer Flor Silvestre, released in 1964 by Musart Records. It features both ranchera and bolero songs, all of which became hits. The album's guitarist is Benjamín Correa.

Concha Valdés Miranda was a Cuban songwriter and performer of Cuban music.

Flor Silvestre y las canciones de sus tríos favoritos is a studio album by Mexican singer Flor Silvestre, released in 1970 by Musart Records. It features Flor Silvestre's versions of twelve boleros that were popularized by Mexican trios in the 1950s.

Flor Silvestre con el Mariachi México is a studio album by Mexican singer Flor Silvestre, released by Musart Records. It is Flor Silvestre's second Musart album and contains her 1961 version of "Cielo rojo", one of her signature songs.

"Contigo En La Distancia" is a bolero which was written by the singer-songwriter Cuban César Portillo de la Luz when he was 24 years old. It was written in the year 1946.

Francisco Fellove Valdés, also known as El Gran Fellove, was a Cuban songwriter and singer. A prolific composer of the feeling generation, he is well known for his particular style of scat singing known as chua chua. He is the author of the famous guaracha-pregón "Mango mangüé", recorded by Machito and Celia Cruz among others. He was the cousin of conga drummer Carlos "Patato" Valdés.

Alberto Vázquez Gurrola is a Mexican singer and actor form part of the golden age generation of rock and roll in Mexico. He had a son, Arturo Vazquez, who also became a singer, with actress Isela Vega, but the couple never married.

Puchito Records was Cuba's second independent record label. It was founded in 1954 during the mambo and cha-cha-chá explosion of the 1950s. Many of its recordings, produced by its founder Jesús Gorís (1921–2006), became instant hits. Cuban music styles represented in its discography include danzón, güajira, son cubano, son montuno, cha-cha-chá, guaracha, guaguancó, Cuban bolero, Cuban rumba, mambo, new flamenco, and Zarzuela. Other styles include farruca, merengue (Dominican), Ranchera (Mexican), nueva canción (Mexican) ... styles from Spain include cuplé, pasodoble, and flamenco. The ensembles range from studio orchestras to jazz combos to big bands to charangas.

Alma Graciela Haro Cabello, known professionally as Esmeralda, was a Mexican singer and actress. She was nicknamed La Versátil because she sang and recorded songs of various music genres, including cuplé, bolero, and tango.