Olympic video games are a subgenre of sport video games officially licensed by the International Olympic Committee. These games have more than one event and/or several sports, and have an Olympic theme. This is in contrast to multi-sport games such as Wii Sports which are not classified as Olympic video games. No genres other than sports video games have been attempted with the Olympic license.

They are one of the older video game genres, having first appeared with the 1983 arcade classic Track & Field . Since then, numerous titles have been released, usually in the immediate run up to the Olympic Games each game is intended to cover. Official IOC licenses became a norm since the first official game, Olympic Gold , was released in time for the 1992 Summer Olympics.

This is unrelated to the discussion surrounding having video games be included as an Olympic sport. [1] [2]

Companies like Epyx, Accolade, U.S. Gold and Konami developed many of the early games. The genre is often overlooked by the gaming industry and considered little more than a novelty or memorabilia attached to the event, with some considering it as purely an exercise in licensing and merchandise. Gameplay is the common target for detractors, since it usually consists of the 'button mashing' formula used in Track & Field or 'joystick waggling' as used in Daley Thompson's Decathlon .

However, since they are released at regular intervals, they can be used as a way to compare how graphics in computer games have changed over time: from the CGA graphics of the first Epyx titles to the ever-evolving 3D graphics of more modern titles such as Athens 2004, Beijing 2008, and London 2012. Forbes argued that while the genre doesn't evolve, they would like to see how the various sports are rendered on next generation consoles. [3]

From the 1988 Seoul Olympics up to the London 2012 Olympics, an official Olympic tie-in game was released to coincide with each Olympic Games. [3] The games of Sochi 2014 and Rio 2016 did not have accompanying console video games. The accompanying console video game returned for the PyeongChang 2018 games under the release of Steep. In 2019, an exclusive console Olympic video game has already been released for Tokyo 2020 in Japan.

Kotaku argues that the 4-year cycle nature of such games results in each release being on a new console, becoming a first-adopter decision for Olympic video game fans. In addition, the site noted that these games never have an overarching sense of narrative, which essentially turns them into a series of minigames. Thirdly, many of the Olympic sports already have dedicated titles out there which would appeal to fans more than these minigame collections which contain simplified gameplay versions of their sports. The games also lack a career mode, which is common in many of their sports video game counterparts. [4]

Vice argues that prominently having successful Olympic sportspeople on the cover of Olympic games builds their public brand profile by introducing them to gamers. The site likened this to how some music-related video games can introduce gamers to new bands, or some media tie-ins can encourage gamers to explore the expanded universe. [5]

Games on other genres with another Olympic related license

Slate argued that Olympic video games are generally forgotten quickly like the Olympic games they are based on, and thought the genre had remained stagnant from 1983's Track & Field up to 2K Sports' Torino 2006. [7] Kotaku noted that the Olympic brand is so huge that these video games are often non-entities by comparison while the event is happening. And once the event is over the game becomes obsolete too. [4]

Track & Field, known in Japan and Europe as Hyper Olympic, is an Olympic-themed sports arcade game developed by Konami and released in 1983. The Japanese release sported an official license for the 1984 Summer Olympics. Players compete in a series of events, most involving alternately pressing two buttons as quickly as possible to make the onscreen character run faster. It was followed by a sequel, Hyper Sports. 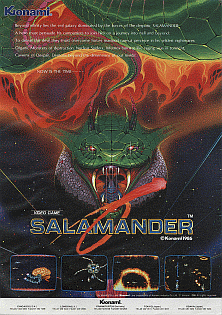 Salamander, retitled Life Force in North America and in the Japanese arcade re-release, in Europe known as Life Force: Salamander, is a scrolling shooter arcade game by Konami. Released in 1986 as a spin-off of Gradius, Salamander introduced a simplified power-up system, two-player cooperative gameplay and both horizontally and vertically scrolling stages. Some of these later became the norm for future Gradius games.

Mario & Sonic at the Olympic Games is a crossover sports and party game developed by the Sega Sports R&D Department. It is the first installment on the Mario & Sonic series. It was published by Nintendo in Japan and by Sega in other regions, and released on the Wii in November 2007 and the Nintendo DS handheld in January 2008. The first official video game of the 2008 Summer Olympic Games, it is licensed by the International Olympic Committee (IOC) through exclusive licensee International Sports Multimedia (ISM), and is the first official crossover game to feature characters from both the Mario and Sonic the Hedgehog series. 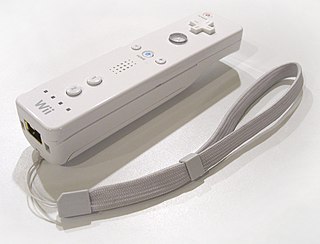 In video games and entertainment systems, a motion controller is a type of game controller that uses accelerometers or other sensors to track motion and provide input. 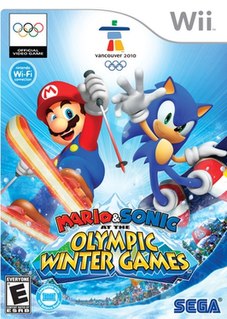 Mario & Sonic at the Olympic Winter Games is a 2009 sports and party game developed by Sega. Like its predecessor, it was published by Nintendo for Japan and by Sega for North America and Europe. The game is officially licensed by the International Olympic Committee (IOC) through exclusive license International Sports Multimedia. The game is the third official crossover title to feature characters from both Mario and Sonic's respective universes, the first and second being the game's predecessor Mario & Sonic at the Olympic Games and Super Smash Bros. Brawl respectively. It was released on the Wii and the Nintendo DS in October 2009, and is the first official video game of the 2010 Winter Olympic Games.

Sonic & Sega All-Stars Racing is a kart racing video game, part of the Sega Superstars series, produced for Wii, Xbox 360, PlayStation 3, Nintendo DS, and Microsoft Windows, featuring characters from Sega franchises. A mobile version has been developed by Gameloft. The game was released for iOS in June 2011, as a paid download. A version for OS X was released by Feral Interactive in April 2013.

Sonic & All-Stars Racing Transformed also known as "Sonic Racing Transformed" is a kart racing video game developed by Sumo Digital and published by Sega. It was released for the PlayStation 3, Xbox 360, and Wii U in November 2012, for PlayStation Vita in December 2012, for Microsoft Windows in January 2013, for Nintendo 3DS in February 2013, and for iOS and Android in January 2014. The PS3 and Wii U versions of the game were released in Japan on May 15, 2014.

Mario & Sonic at the Sochi 2014 Olympic Winter Games is a crossover sports/party video game for the Wii U, the first for the console. It was unveiled on May 17, 2013, is the fourth game in the Mario & Sonic series, and is the official video game for the 2014 Winter Olympics being held in Sochi. It was released on November 8, 2013 in Europe, November 9, 2013 in Australia, November 15, 2013 in North America, and December 5, 2013 in Japan. It the first title in the series to feature an online multiplayer mode, and the first to be published by Nintendo globally, as previous titles were published by Sega outside Japan. Unlike previous titles, the game is solely on home console, and does not have a portable version.