In Japan, onsen ( 温泉 ) are the country's hot springs and the bathing facilities and traditional inns around them. As a volcanically active country, Japan has many onsens scattered throughout all of its major islands. [1] There are approximately 25,000 hot spring sources throughout Japan that provide hot mineral water to about 3,000 genuine onsen establishments. [2]

Onsens come in many types and shapes, including outdoor (露天風呂 or 野天風呂, roten-buro or noten-buro) and indoor baths (内湯, uchiyu). Baths may be either publicly run by a municipality or privately, often as part of a hotel, ryokan , or bed and breakfast (民宿, minshuku).

The presence of an onsen is often indicated on signs and maps by the symbol ♨ or the kanji 湯 (yu, meaning "hot water"). Sometimes the simpler hiragana character ゆ (yu), understandable to younger children, is used.

Traditionally, onsens were located outdoors, although many inns have now built indoor bathing facilities as well. Nowadays, as most households have their own bath, the number of traditional public baths has decreased, [3] but the number of sightseeing hot spring towns has increased (most notable ones including Kinosaki Onsen, Togura Kamiyamada Onsen  [ ja ], and Akanko Onsen  [ ja ]). [4] Onsens by definition use naturally hot water from geothermally heated springs.

According to the Hot Springs Act ( 温泉法 , Onsen Hō), onsen is defined as 'hot water, mineral water, and water vapor or other gas (excluding natural gas of which principal component is hydrocarbon) gushing from underground' and its temperature is more than 25 °C or contains specific substance with specific concentration. [5] Therefore, cold onsens do exist. [6] [ better source needed ]

The Japanese Hot Springs Act states that the mineralized hot spring water that feeds an onsen must be at least 24°C/ 75°F originating at a depth of 1.5 kilometers, and contain specific amounts of minerals such as sulphur, sodium, iron or magnesium. [2]

Traditionally, men and women bathed together at both onsens and sentōs, but gender separation has been enforced since the opening of Japan to the West during the Meiji Restoration. Mixed bathing (混浴, kon'yoku) persists at some special onsen in rural areas of Japan, [7] which usually also provide the option of separate "women-only" baths or different hours for the two sexes. Japanoko Guide states that "during Post-World War II, when Japan decided to open its ports to other nations, laws against konyoku baths have been passed to lift the country’s image. Since many viewed bathing naked as lewd and vulgar, these laws especially targeted the konyoku nude Japanese bathhouse. On the other hand, there are still those who fight for the continuation of this practice claiming that this is a Japanese culture that must be treasured and maintained. Unfortunately, this did not prevent the slow fall of establishments with Onsen mixed-gender baths and is now treated as some of the rare places in the country." [8] Men may cover their genitals with a small towel while out of the water, while women usually wrap their bodies in full-size towels. Children of either sex may be seen in both the men's and the women's baths. In some prefectures of Japan, including Tokyo, where nude mixed bathing is banned, people are required to wear swimsuits or yugi (湯着), which are specifically designed for bathing. [9]

As at a sentō, at an onsen, all guests are expected to wash and rinse themselves thoroughly before entering the hot water. Bathing stations are equipped with stools, faucets, wooden buckets, and toiletries such as soap and shampoo; nearly all onsen also provide removable shower heads for bathing convenience. Entering the onsen while still dirty or with traces of soap on the body is socially unacceptable. [lower-alpha 1]

Guests are not normally allowed to wear swimsuits in the baths. However, some modern onsen with require their guests to wear a swimming suit in their mixed baths. [9]

Onsen guests generally bring a small towel with them to use as a wash cloth. The towel can also provide a modicum of modesty when walking between the washing area and the baths. Some onsen allow one to wear the towel into the baths, while others have posted signs prohibiting this, saying that it makes it harder to clean the bath. It is against the rules to immerse or dip towels in the onsen bath water, since this can be considered unclean. People normally set their towels off to the side of the water when enjoying the baths, or place their folded towels on top of their heads.

Onsen vary from quiet to noisy; some play piped music and often feature gushing fountains. Bathers will engage in conversation in this relaxed situation. There are usually prohibitions against rowdiness in the washing and bathing areas; however, a small amount of excess energy and splashing around is usually tolerated from children.

By 2015, around half (56%) of onsen operators had banned bathers with tattoos from using their facilities. [10] [11] [12] The original reason for the tattoo ban was to keep out Yakuza and members of other crime gangs who traditionally have elaborate full-body decoration. [13]

However, tattoo-friendly onsen do exist. [14] A 2015 study by the Japan National Tourism Organisation found that more than 30% of onsen operators at hotels and inns across the country will not turn someone with a tattoo away; another 13% said they would grant access to a tattooed guest under certain conditions, such as having the tattoo covered up. [10] Some towns have many tattoo-friendly onsen that do not require guests to cover them up. Two such towns are Kinosaki Onsen in Hyōgo and Beppu Onsen in Ōita. [15]

With the increase in foreign customers due to growing tourism, some onsen that previously banned tattoos are loosening their rules to allow guests with small tattoos to enter, provided they cover their tattoos with a patch or sticking plaster. [10] [16]

The volcanic nature of Japan provides plenty of springs. When the onsen water contains distinctive minerals or chemicals, the onsen establishments typically display what type of water it is. [17] For many years people have believed that soaking in hot mineral spring water has health benefits. [18]

Some examples of types of onsen include:

Article 18, paragraph 1 of the Japanese Hot Springs Act publishes guidance on contraindications and cautions for bathing in hot springs, and drinking their respective waters. [19] Although millions of Japanese bathe in onsens every year with few noticeable side effects, there are still potential side effects to onsen usage, such as aggravating high blood pressure or heart disease. [20]

Legionella bacteria have been found in some onsens with poor sanitation. [21] [22] Revelations of poor sanitary practices at some onsens have led to improved regulation by hot-spring communities to maintain their reputation. [23]

There have been reports of infectious disease found in hot bodies of water worldwide, such as various Naegleria species. [24] While studies have found the presence of Naegleria in hot spring waters, Naegleria fowleri , responsible for numerous fatal cases of primary amoebic meningoencephalitis around the world, has not been found to be present in the water at onsens. [24] Nevertheless, fewer than five cases have been seen historically in Japan, although not conclusively linked to onsen exposure. [25]

Many onsens display notices reminding anyone with open cuts, sores, or lesions not to bathe. Additionally, in recent years onsens are increasingly adding chlorine to their waters to prevent infection, although many onsen purists seek natural, unchlorinated onsens that do not recycle their water but instead clean the baths daily. [23] These precautions as well as proper onsen usage (i.e. not placing the head underwater, washing thoroughly before entering the bath) greatly reduce any overall risk to bathers.

Voyeurism is reported at some onsens. [26] [27] This is mitigated in some prefectures of Japan where nude mixed bathing is not permitted, visitors must wear swimsuits. [9] 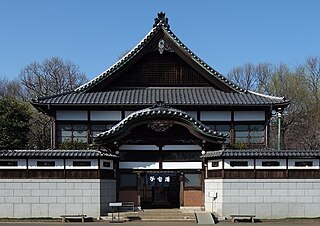 Sentō (銭湯) is a type of Japanese communal bathhouse where customers pay for entrance. Traditionally these bathhouses have been quite utilitarian, with a tall barrier separating the sexes within one large room, a minimum of lined-up faucets on both sides, and a single large bath for the already washed bathers to sit in among others. Since the second half of the 20th century, these communal bathhouses have been decreasing in numbers as more and more Japanese residences now have baths. Some Japanese find social importance in going to public baths, out of the theory that physical proximity/intimacy brings emotional intimacy, which is termed skinship in pseudo-English Japanese. Others go to a sentō because they live in a small housing facility without a private bath or to enjoy bathing in a spacious room and to relax in saunas or jet baths that often accompany new or renovated sentōs. 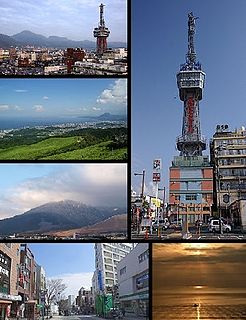 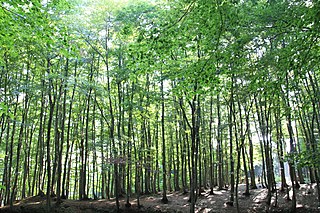 Takanoyu Onsen (鷹の湯温泉) is one of several hot springs in the Akinomiya Hot Springs area of the city of Yuzawa, in southern Akita Prefecture. The onsen is nestled in a small gorge along the banks of the Yakunai River. Because of its secluded location, it is referred to as a Hitou, or hidden hot spring. 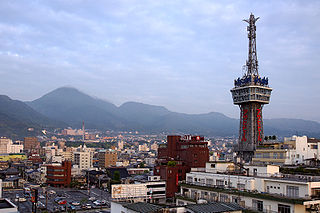 Beppu Onsen (別府温泉) is a group of hot springs in the city of Beppu, Ōita in Japan. Beppu Onsen is divided into eight major hot spring areas known as "Beppu Hatto".

Events in the year 1994 in Japan. It corresponds to Heisei 6 (平成6年) in the Japanese calendar.

Events in the year 1977 in Japan. It corresponds to Shōwa 52 (昭和52年) in the Japanese calendar.

Events in the year 1961 in Japan. It corresponds to Shōwa 36 (昭和36年) in the Japanese calendar.

Wikimedia Commons has media related to Hot springs of Japan .
This page is based on this Wikipedia article
Text is available under the CC BY-SA 4.0 license; additional terms may apply.
Images, videos and audio are available under their respective licenses.