Ord och Bild, also stylized as Ord & Bild, (Swedish: Word and Image) is a cultural and literary magazine which has been in circulation with some interruptions since 1892. The magazine is headquartered in Gothenburg, Sweden, [1] and its subtitle is Illustrerad månadsskrift (Swedish: Illustrated monthly). [2]

In the 1930s Ord och Bild was one of the Swedish magazines which was read by Finnish authors and literary critics to have information on new literary tendencies in Europe and the United States. [5] In addition to literary work and criticism the magazine features articles on other topics, including art, music, society, philosophy, and history. [4] One such article was about the Nordic race which was written by Gunnar Dahlberg. [6] In the article which appeared in the magazine in 1933 Dahlberg objected the concept of race employed by the Nazi figures. [6] The magazine also published articles concerning pornography and pop music in the 1960s. [7] During this period the magazine was directed by young leftist intellectuals. [8]

Jan Berglin is a Swedish cartoonist who made his debut in the Uppsala student newspaper Ergo in 1985. After completing his studies, Berglin has been living in Gävle where he works as a teacher of Swedish and religion. He published his early strips in the local social democratic newspaper Arbetarbladet, but became known to a wider audience in 1995, when he started to draw for the Stockholm-based but nationally distributed conservative newspaper Svenska Dagbladet. His strips have been collected and republished in several albums.

Arne Isacsson was one of Sweden's most famous watercolour artists and art educators. He was also an author and professor and founded the Gerlesborg School of Fine Art in 1944. Isacsson's well-represented oeuvre explored, among other things, the properties of colour pigments in copious amounts of water. 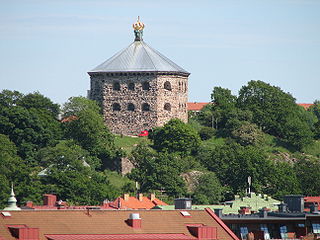 Skansen Kronan is a redoubt on the hill Risåsberget, in the Haga district of Gothenburg, Sweden. 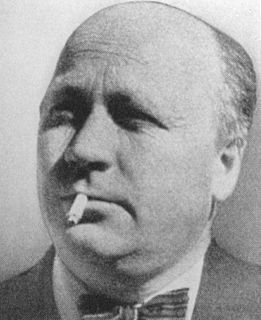 Folke Henry Jonsson was a Swedish opera singer who sang leading bass roles primarily at the Royal Swedish Opera and in other Scandinavian opera houses for many years. He also appeared as one of the priests in Ingmar Bergman's film The Magic Flute (Trollflöjten) and as the Herald in Roberto Rossellini's film Giovanna d'Arco al rogo.

Gertrud Pålson-Wettergren was a Swedish mezzo-soprano. 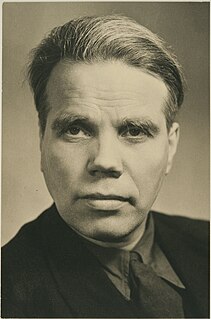 Atos Kasimir Wirtanen was a Finnish left-wing intellectual, journalist, member of Finnish parliament (1936–1953) and cultural critic. He was born in Saltvik, Åland. 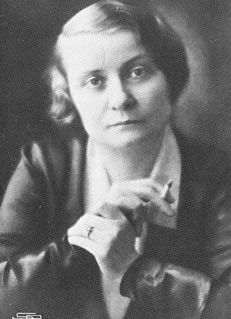 Karl Gunnar Harding is a Swedish poet, novelist, essayist and translator, considered 'one of Sweden's foremost poets'. Among his other poetry collections is Starnberger See from 1977. Among his novels is Luffaren Svarta Hästen from 1977. He published the children's book Mannen och paraplyet in 1990. He was awarded the Dobloug Prize in 2011.

Helena Eriksson is a Swedish poet. Her sixth collection of poetry, Strata (2004), was published in English in 2014.

Hilda Augusta Amanda Kerfstedt, née Hallström, was a Swedish novelist, playwright and translator. She was a popular and noted writer in late 19th and early 20th century Sweden, and participated in the public debate. She was also engaged in the movement for women's rights, and active in the Fredrika Bremer Association and Married Woman's Property Rights Association. As a feminist, she focused on the debate around sexual equality, and was critical to the contemporary sexual double standards for men and women. As such, she was one of the participants in the Nordic sexual morality debate, the public debate in Swedish papers, books and plays, which took place during the 1880s. Kerfstedt was a member of the women's association Nya Idun and one of its first committee members. She was the editor of the feminist paper Dagny, the publication of the Fredrika Bremer Association, in 1888–1891. She was especially noted within the debate on children's literature.

Knut Martin Stjerna was a Swedish archaeologist and scholar, notable for a number of papers analyzing Beowulf from an archaeological perspective. He was a lecturer at Uppsala University, where he taught, among others, Birger Nerman and Sune Lindqvist.

Tyra Kleen was a Swedish artist, author and women's rights activist. Her paintings, illustrations, lithographs and publications were important to the Swedish fin de siècle art movement. But above all she was an independent ethnographical researcher.

Emelie Schepp is a Swedish crime author. Her crime novels are centered around Norrköping and focus on the main figure Jana Berzelius, a public prosecutor. In 2013, she made her debut with the crime novel Märkta för livet which sold 40,000 copies in just six months. She then signed a book deal for three books with Wahlström & Widstrand in the fall of 2014, re-releasing her debut book the same year.

Margareta Ulrika Abenius was a Swedish literary critic, researcher, author, translator, and essayist. One of the leading voices of the Swedish literary canon in the 20th century, Abenius is best known for her biography of fellow Swedish poet Karin Boye.

Lisbeth Helena Larsson (1949–2021) was a Swedish literary historian and researcher who from 2000 was professor of literary studies at the University of Gothenburg where she focused on gender studies. Drawing on the archive of women's history at the Arts Faculty Library, she published a book on women from Gothenburg, Hundrade och en Göteborgskvinnor. It paved the way for a grant from the Bank of Sweden Tercentenary Foundation which in March 2018 led to the establishment of Svenskt kvinnobiografiskt lexikon, a searchable biographical dictionary of Swedish women. Larsson is also remembered as a theatre and literature critic for the newspaper Expressen.