The Order of Friendship is awarded to Russian and foreign nationals for special merit in strengthening peace, friendship, cooperation and understanding between nations, for fruitful work on the convergence and mutual enrichment of cultures of nations and peoples; for the active conservation, development and promotion of the cultural and historical heritage of Russia; for great contribution to the implementation of joint ventures with the Russian Federation, major economic projects and attracting investments into the economy of the Russian Federation; for broad charitable activities. [5]

The badge of the Order of Friendship is made of gilded silver and enamels. It is a pentagonal star created from diverging golden rays. On the obverse at the center of the star is a terrestrial globe, with the oceans covered in blue enamel. The globe is surrounded by a green enamelled wreath of olive branches. On the reverse is the inscription "Peace and Friendship" (Russian : "Мир и дружба") and the etched serial number of the individual award. The distance between opposite tips of the star is 44 mm. [1]

The badge of the order is connected by a ring through the suspension loop to a standard Russian pentagonal mount covered with an overlapping 24 mm wide green silk moiré ribbon with 6 mm wide light blue stripes along its edges. [1] When worn in the presence of other Orders and medals of the Russian Federation, the Order of Friendship is located immediately after the Order of Honour. [6]

The following individuals were awarded the Order of Friendship: [7] 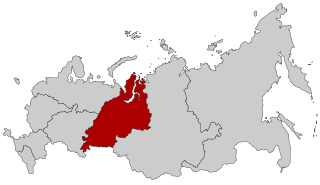 Ural Federal District is one of the eight federal districts of Russia. Its population was 12,080,523 according to the 2010 Census. 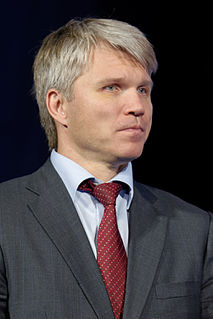 The Security Council of the Russian Federation is a constitutional body of the Russian President that works out the President's decisions on national security affairs and matters of strategic interest. Composed of Russia′s top state officials and heads of defence and security agencies and chaired by the President of Russia, the SCRF acts as a forum for coordinating and integrating national security policy.

Vladimir Ardalionovich Malygin is a Russian diplomat. He has served in various diplomatic roles since the 1970s, and has been the incumbent Ambassador of Russia to Malta since December 2014.

The City of Military Glory is an honorary title bestowed upon the citizenry of Russian cities, where soldiers had displayed courage and heroism during the Second World War. The award, which to date has been bestowed upon 45 cities, is similar to the Hero City title awarded during the era of the Soviet Union and no city has yet received both awards. 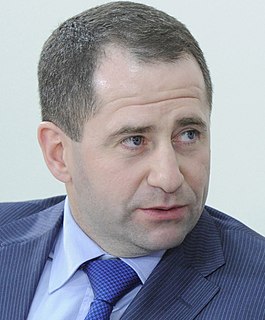 Mikhail Viktorovich Babich is a Russian politician and diplomat. Russian Ambassador to Belarus since 24 August 2018.

Natalya Aleksandrovna Timakova is a Russian journalist. As of 2012, she is press attaché to the Russian Prime Minister Dmitry Medvedev.

Leonid Mlechin is a Soviet and Russian journalist, international observer, moderator of the "special file" of "TV Center", and two-time winner of TEFI. A member of the Writers' Union, and Russia. Honored Worker of Culture of the Russian Federation.

Eleonora Valentinovna Mitrofanova is a Russian politician and diplomat. She currently serves as the Ambassador of Russia to Bulgaria, having held the post since 15 January 2021. She was previously ambassador-at-large of the Ministry of Foreign Affairs and a Permanent Delegate of to UNESCO (2009–2016). She was the first woman to hold the post of First Deputy Minister of Foreign Affairs.

Alexander Viktorovich Grushko is a Russian diplomat, and is currently Deputy Minister of Foreign Affairs, since 22 January 2018. Previously, he was the Permanent Representative of Russia to NATO, serving from 2012 to 2018.

Sergei Vadimovich Kirpichenko was a Russian diplomat. He served as ambassador to various countries during the 1990s until the 2010s, and at the time of his death was the incumbent Ambassador to Egypt.

Andrey Vladimirovich Kelin is a Russian diplomat. He has served in various diplomatic roles since the 1970s, and has been the incumbent Ambassador of Russia to the United Kingdom since November 2019.

Sergey Alimovich Melikov, is a Russian statesman and military leader, who is currently the acting Head of the Republic of Dagestan from 5 October 2020.