Order of the Annunciation of the Blessed Virgin Mary

After Joan of Valois husband Louis gained the throne of France in 1498, he obtained an annulment of their marriage from the Holy See, on the basis of their having been forced into the marriage by Joan's father. After being freed from her marriage, Joan retired to Bourges, where in 1501 she succeeded in founding a monastery in honor of the Annunciation of the Angel Gabriel to the Blessed Virgin Mary. [1] The Rule of Life she wrote for her community is entitled The Ten Virtues of the Blessed Virgin, the imitation of which she proposed as the aim of the order. It was confirmed by Pope Alexander VI and, on 8 October 1502, the first five members received the veil, the foundress herself taking solemn vows on 4 June 1503. She died in 1505.

The Franciscan friar who had assisted Joan in the foundation, Gilbert Nicolas, (whose name was changed by brief of Pope Alexander to Gabriel Maria) was appointed Superior of the monastery by her, and, after revising the Constitutions of the Order, presented them for confirmation in 1517 to Pope Leo X, who then placed the Order under the jurisdiction of the Friars Minor. [1] Under Nicholas' guidance, new monasteries of the Order were founded in Albi (1507), Béthune (1516), Bruges (1517), Rodez (1519), Bordeaux (1520), Chanteloup (1529), and Louvain (1530). The rapid expansion of the Order was due primarily to the patronage of the Archduchess Margaret of Austria, who had been betrothed in her infancy to the future King Charles VIII of France and brought up at the French royal court. When she became Governor of the Netherlands, she showed great interest in the Franciscan Order and the Order founded by Joan, whom she had known personally. [2]

Beginning in 1610, the Ministers Provincial of the Franciscan friars in France conducted a reform of female communities of the Franciscan Third Order Regular, which established for them enclosed monasteries and allowed the taking of solemn vows, which previously had been barred to them due to the more apostolic way of life they had followed. [2] In this way a number of communities of Franciscan Sisters were added to the Annonciade nuns.

The Thirty Years' War proved to be a difficult period for the monasteries of the Order, with many of them damaged, burned, and abandoned. The history of one house of the Order serves to illustrate the turmoil they faced. In May 1635, Catherine Bar, and the nuns of the monastery in Bruyères were forced to flee before the Swedish army. After briefly settling in Badonviller, they were instructed by the Minister Provincial to move to Commercy, where they opened a small school for girls. Some nuns, exhausted by hardships, fell ill along the way with the plague. Only six nuns of the original community of twenty survived. The survivors found shelter with a community of Benedictine nuns in Rambervillers and joined them in 1639. Bar then took the new religious name of Mechtilde of the Blessed Sacrament. She later went on to found the Benedictine Sisters of Perpetual Adoration in her hometown of Saint-Dié-des-Vosges in 1660. [2]

Three of the nuns from that original monastery, however, found their way to the hospitality of a friend of their former monastery living in Burey-en-Vaux. With her help, in 1647 they re-established their community in Vaucouleurs. [2]

Prior to the French Revolution, there were 45 Annonciade monasteries, mostly in France and Belgium. The French houses were suppressed during the turmoil. [1] According to tradition, three nuns from the Villeneuve-sur-Lot monastery were executed during the Reign of Terror for their faith. [3]

Fleeing restrictions on and persecution of religious orders during the Third Republic, a monastery existed at Saint Margaret's Bay (Kent, England) from 1903 until 1976. A photograph of the facility appears on St Margaret's Village Archive website. [4] [5]

Their present-day mission as nuns is first and foremost contemplation and giving praise to God. Hours are designated for meditation and silence. [6] Today the Order numbers around eighty nuns living in seven monasteries in France, Belgium and Costa Rica. A new foundation is under way at the Marian Shrine in Licheń, Poland.

The Order currently (2015) has four monasteries in France and one each in Belgium, Costa Rica, and Poland:

Confraternity of the Annunciation

In 1517 Gabriel Nicholas obtained Church approval for the merger of two previously existing religious fraternities into a confraternity called the Way of Peace (Chemin de Paix) known today as the Confraternity of the Annunciade, the Way of Peace. [2] The Order of Peace may be joined through affiliation to one of the monasteries of the Order.

A monastery is a building or complex of buildings comprising the domestic quarters and workplaces of monastics, monks or nuns, whether living in communities or alone (hermits). A monastery generally includes a place reserved for prayer which may be a chapel, church, or temple, and may also serve as an oratory, or in the case of communities anything from a single building housing only one senior and two or three junior monks or nuns, to vast complexes and estates housing tens or hundreds. A monastery complex typically comprises a number of buildings which include a church, dormitory, cloister, refectory, library, balneary and infirmary, and outlying granges. Depending on the location, the monastic order and the occupation of its inhabitants, the complex may also include a wide range of buildings that facilitate self-sufficiency and service to the community. These may include a hospice, a school, and a range of agricultural and manufacturing buildings such as a barn, a forge, or a brewery. 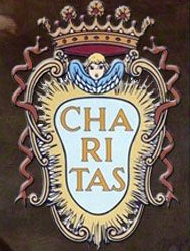 The Minims, officially known as the Order of Minims, are a Roman Catholic religious order of friars founded by Saint Francis of Paola in fifteenth-century Italy. The order soon spread to France, Germany and Spain, and continues to exist today.

Joan of France, was briefly Queen of France as wife of King Louis XII, in between the death of her brother, King Charles VIII, and the annulment of her marriage. After that, she retired to her domain, where she soon founded the monastic Order of the Annunciation of the Blessed Virgin Mary, where she served as abbess. From this Order later sprang the religious congregation of the Apostolic Sisters of the Annunciation, founded in 1787 to teach the children of the poor. She was canonized on 28 May 1950 and is known in the Roman Catholic Church as Saint Joan of Valois, O.Ann.M..

Isabelle of France was a French princess, the daughter of Louis VIII of France and Blanche of Castile. She was a younger sister of King Louis IX of France and of Alfonso, Count of Poitiers, and an older sister of King Charles I of Sicily. In 1256, she founded the nunnery of Longchamp in part of the Forest of Rouvray, west of Paris. Isabelle consecrated her virginity and her entire life to God alone. She is honored as a saint by the Franciscan Order. Her feast day is 22 February.

Annunciade, and various alternate spellings, may refer to:

The Community of St. Clare (OSC) is a Franciscan Anglican religious order of nuns, and part of the wider Franciscan movement within the Anglican Communion. The community, founded in 1950 and based at Freeland near Witney, Oxfordshire, England, is one of several associated with the Society of Saint Francis. It forms the 'Second Order' of the Anglican Franciscan movement, commonly known as the 'Poor Clares'. The community, in common with other Second Order Franciscan communities, is an enclosed and contemplative one, and the sisters provide for their own needs through a variety of activities. The sisters believe that their 'enclosed' life does not mean being 'shut in', but rather an opportunity to live and work together on one site in real community. The community runs a guest house and retreat centre, and the sisters engage in various works including sewing, painting, printing, and manufacturing altar breads. 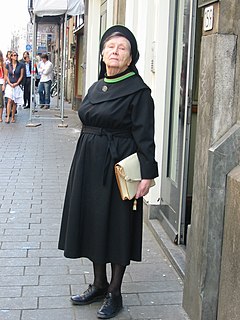 The Bernardine Cistercians of Esquermes are a small branch of the Cistercian Order. They follow the Rule of St Benedict, and co-operate with the apostolic mission of the Church through educational activities and hospitality. There are eight monasteries of nuns in six countries, united by a central Government.

Agnes of Jesus was a French Catholic nun of the Dominican Order. She was prioress of her monastery at Langeac, and is today venerated in the Roman Catholic Church, having been beatified by Pope John Paul II on November 20, 1994.

The Colettine Poor Clares are a reform branch of the Order of St. Clare, founded by Clare of Assisi in Italy in 1211. They follow the interpretation of the Rule of St. Clare established by Saint Colette in 1410, originally a French hermit and member of the Third Order of St. Francis.

The Monastic Family of Bethlehem, of the Assumption of the Virgin and of Saint Bruno is a Roman Catholic institute of consecrated life that practices Carthusian spirituality and was founded through the inspiration of a small group of French pilgrims on November 1, 1950, at St. Peter's Square, in the Vatican City, following the promulgation of the dogma of the Assumption of the Blessed Virgin Mary into Heaven. The Monastic Sisters were founded in France, soon after, and the Monastic Brothers in 1976.

Our Lady of Pellevoisin is a title of the Blessed Virgin Mary which refers to a series of Marian apparitions in Pellevoisin, in the province of Berry, in the department of Indre, France. Pellevoisin is west of Châteauroux in the Catholic Archdiocese of Bourges. 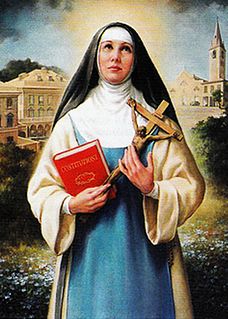 The Order of the Most Holy Annunciation, also known as the Turchine or Blue Nuns, as well as the Celestine Nuns, is a Roman Catholic religious order of contemplative nuns formed in honour of the mystery of the Incarnation of Christ at Genoa, in Italy, by Blessed Maria Vittoria De Fornari Strata.

The Monastery Saint Claire, also known as the Convent of Mary's Fear and by other names, is a convent of the Poor Clares on Tremor Hill in southern Nazareth, Israel. Established in 1884, it is primarily known for the productive time the now-sainted Charles de Foucauld spent there at the end of the 19th century. Expelled from the Ottoman Empire at the onset of World War I, the nuns of the abbey relocated to Malta, founding a new community there. The Sisters of St Clare returned to Nazareth in 1949 but used newer facilities on 3105 Street on the north slope of Tremor Hill. Their former location beside what is now Paulus HaShishi Street was repaired by the Servants of Charity for use as a special needs school in the 1970s.