Order of the October Revolution

The Order of the October Revolution (Russian : Орден Октябрьской Революции, Orden Oktyabr'skoy Revolyutsii) was instituted on October 31, 1967, in time for the 50th anniversary of the October Revolution. It was conferred upon individuals or groups for services furthering communism or the state, or in enhancing the defenses of the Soviet Union, military and civil. It is the second-highest Soviet order, after the Order of Lenin.

The insignia of the Order consisted of a badge, which was a red star with golden rays between the arms; at the centre was a pentagon bearing the image of the cruiser Aurora participating in the October Revolution. Above this was a red flag bearing the words "October Revolution" in Russian. A Hammer and Sickle emblem was placed at the bottom. The badge was worn on the left chest with a red ribbon bearing five blue stripes at the centre.

The Aurora was itself awarded the Order, the only ship ever to have received the award. Military units and institutions receiving the award applied the order name to their title upon its reception. 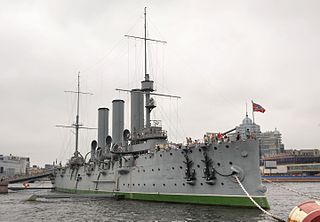 Aurora is a 1900 Russian protected cruiser, currently preserved as a museum ship in Saint Petersburg. Aurora was one of three Pallada-class cruisers, built in Saint Petersburg for service in the Pacific. All three ships of this class served during the Russo-Japanese War. Aurora survived the Battle of Tsushima and was interned under US protection in the Philippines, and eventually returned to the Baltic Fleet. 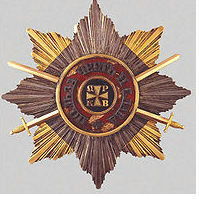 The Order of Saint Vladimir was an Imperial Russian order established in 1782 by Empress Catherine II in memory of the deeds of Saint Vladimir, the Grand Prince and the Baptizer of the Kievan Rus'. 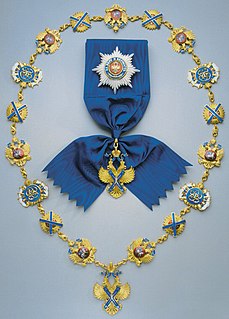 The Order of the White Eagle is Poland's highest order awarded to both civilians and the military for their merits. It was officially instituted on 1 November 1705 by Augustus II the Strong and bestowed on eight of his closest diplomatic and political supporters. 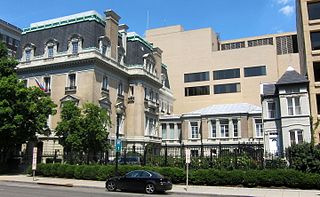 Yuli Mikhailovich Vorontsov was a Russian and Soviet diplomat, President of International Centre of the Roerichs (Moscow). In the mid-1970s he was Chargé d'Affaires at the Soviet embassy in Washington under Ambassador Dobrynin. He was then Ambassador to India (1978-1983) and France (1983-1986). He returned to Moscow to be the first deputy foreign minister (1986-1990) and participated in arms reduction talks with the United States. In 1988-1989, he was simultaneously the Ambassador to Afghanistan as Soviet troops withdrew from the country. He then served as the last Soviet ambassador to United Nations between 1990 and 1991 and as the first Russian Permanent Representative to the UN from 1991 to 1994. After this he served as the Russian ambassador to the United States from 1994 to 1998. In 2000 Vorontsov was chosen as the high-level coordinator for issues related to a paragraph of United Nations Security Council Resolution 1284 which once again required Iraq to face "its obligations regarding the repatriation or return of all Kuwaiti and third country nationals or their remains, [and] the return of all Kuwaiti property [...] seized by Iraq".

Guards or Guards units were elite military units of Imperial Russia prior to 1917-18. The designation of Guards was subsequently adopted as a distinction for various units and formations of the Soviet Union and the modern Russian Federation. The tradition goes back to a chieftain's druzhina of medieval Kievan Rus' and the Marksman Troops, the Muscovite harquebusiers formed by Ivan the Terrible by 1550. The exact meaning of the term "Guards" varied over time.

Mother Heroine was an honorary title in the Soviet Union awarded for bearing and raising a large family. The state's intent was not only to honor such large families but also to increase financial assistance for pregnant women, mothers of large families, and single mothers, and to promote an increased level of health in mother and child. The award was established in 1944 and continued to exist until the fall of the Soviet Union in 1991.

The Order of Saint Stanislaus, also spelled Stanislas, was a Polish order of knighthood founded in 1765 by King Stanisław August Poniatowski of the Polish-Lithuanian Commonwealth. It remained under the Kingdom of Poland between 1765 and 1831, and was incorporated under the Russian Empire from 1831 to 1917, until the Russian revolution.

The Order of Glory was a military decoration of the Soviet Union established by Decree of the Presidium of the Supreme Soviet on November 8, 1943. It was awarded to soldiers and non-commissioned officers of the Red Army as well as to aviation junior lieutenants, for bravery in the face of the enemy. 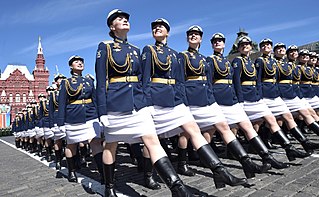 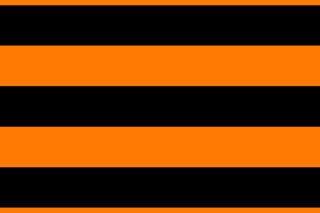 The ribbon of Saint George is a Russian military symbol consisting of a black and orange bicolour pattern, with three black and two orange stripes. It appears as a component of many high military decorations awarded by the Russian Empire, the Soviet Union and the current Russian Federation.

The Medal "For Distinction in Military Service" was a military decoration awarded in two classes by the Soviet Union and later by the Russian Federation, to deserving military personnel of the Ministry of Defense, of internal troops and of border troops of both the USSR and Russian Federation. It was gradually phased out following the dissolution of the USSR being replaced by various ministerial awards. 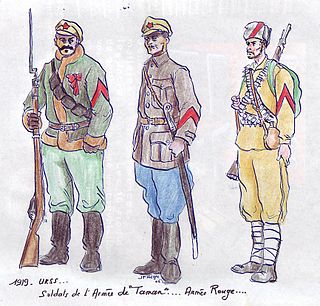 In the period from 1918 to 1935 of the young Soviet Union any bourgeois military thoughts were put under general suspicion by the communists, the new political establishment. Among others, the Old Russian tradition to wear epaulets and shoulder straps as rank insignia was rigorously abolished and was replaced with a new tradition of rank designations and insignia for the new Red Army and the nascent Soviet Navy.

The Honorary Revolutionary Weapon was the highest award in the Soviet Armed Forces between 1919 and 1930. It was awarded to senior commanders for exceptional combat achievement; the majority of recipients received it for actions during the Russian Civil War.