Oregano ( US: /ɔːˈrɛɡənoʊ,ə-/ , [1] UK: /ˌɒrɪˈɡɑːnoʊ/ ; [2] Origanum vulgare) is a flowering plant in the mint family (Lamiaceae). It is native to temperate Western and Southwestern Eurasia and the Mediterranean region.

The word is derived from Classical Greek ὀρίγανον (orī́ganon), from which the Spanish orégano, and Latin orīganum. [3] This is a compound Greek term that consists of ὄρος (óros) meaning "mountain", and γάνος (gános) meaning "brightness", thus, "brightness of the mountain". [3]

Oregano is related to the herb marjoram, sometimes being referred to as wild marjoram. Oregano has purple flowers and spade-shaped, olive-green leaves. It is a perennial, [4] [5] although it is grown as an annual in colder climates, as it often does not survive the winter. [6] [7] Oregano is planted in early spring, the plants being spaced 30 cm (12 in) apart in fairly dry soil, with full sun. Oregano will grow in a pH range between 6.0 (mildly acidic) and 9.0 (strongly alkaline), with a preferred range between 6.0 and 8.0. It prefers a hot, relatively dry climate, but does well in other environments. [8]

Many subspecies and strains of oregano have been developed by humans over centuries for their unique flavours or other characteristics. Tastes range from spicy or astringent to more complicated and sweet. Simple oregano sold in garden stores as Origanum vulgare may have a bland taste and larger, less-dense leaves, and is not considered the best for culinary use, with a taste less remarkable and pungent. It can pollinate other more sophisticated strains, but the offspring are rarely better in quality.

The related species, Origanum onites (Greece, Turkey) and O. syriacum (West Asia), have similar flavours. A closely related plant is marjoram from Turkey, which differs significantly in taste though, because phenolic compounds are missing from its essential oil. Some varieties show a flavour intermediate between oregano and marjoram.

Example cultivars of oregano include:

Cultivars traded as Italian, Sicilian, etc. are usually hardy sweet marjoram (O. ×majoricum), a hybrid between the southern Adriatic O. v. subsp. hirtum and sweet marjoram (O. majorana). They have a reputation for sweet and spicy tones, with little bitterness, and are prized for their flavor and compatibility with various recipes and sauces.

Oregano is a culinary herb, used for the flavor of its leaves, which can be more flavorful when dried than fresh. It has an aromatic, warm, and slightly bitter taste, which can vary in intensity. Good-quality oregano may be strong enough almost to numb the tongue, but cultivars adapted to colder climates may have a lesser flavor. Factors such as climate, season, and soil composition may affect the aromatic oils present, and this effect may be greater than the differences between the various species of plants. Among the chemical compounds contributing to the flavour are carvacrol, thymol, limonene, pinene, ocimene, and caryophyllene. [12]

Oregano's most prominent modern use is as the staple herb of Italian cuisine. Its popularity in the U.S. began when soldiers returning from World War II brought back with them a taste for the "pizza herb", which had probably been eaten in southern Italy for centuries. [13] There, it is most frequently used with roasted, fried, or grilled vegetables, meat, and fish. Oregano combines well with spicy foods popular in southern Italy. It is less commonly used in the north of the country, as marjoram generally is preferred.

The herb is widely used in cuisines of the Mediterranean Basin, the Philippines, and Latin America, especially in Argentine cuisine.

In Turkish cuisine, oregano is mostly used for flavoring meat, especially for mutton and lamb. In barbecue and kebab restaurants,[ clarification needed ] it can be usually found as a condiment, together with paprika, salt, and pepper.

During the summer, generous amounts of dried oregano are often added as the aromatic and flavorful topping to a tomato and cucumber salad in Portugal, but can also season meat and fish dishes as well.

The dried and ground leaves are most often used in Greece to add flavor to Greek salad, and is usually added to the lemon-olive oil sauce that accompanies fish or meat grills and casseroles.

Oregano oil has been used in folk medicine over centuries. [10] Oregano essential oil is extracted from the leaves of the oregano plant. Although oregano or its oil may be used as a dietary supplement, there is no clinical evidence to indicate that either has any effect on human health. [10] [14]

In 2014, the US Food and Drug Administration (FDA) warned a Utah company, Young Living, that its herbal products, including oregano essential oil, were being promoted to have numerous unproven anti-disease effects, and so were being sold as unauthorized misbranded drugs subject to seizure and federal penalties. [15] Similar FDA warning letters for false advertising and unproven health claims about oregano essential oil products were published in 2017 and 2018. [16] [17]

The essential oil of oregano is composed primarily of monoterpenoids and monoterpenes, with the relative concentration of each compound varying widely across geographic origin and other factors. Over 60 different compounds have been identified, with the primary ones being carvacrol and thymol ranging to over 80%, while lesser abundant compounds include p-cymene, γ-terpinene, caryophyllene, spathulenol, germacrene-D, β-fenchyl alcohol and δ-terpineol. [20]

Drying of the plant material affects both quantity and distribution of volatile compounds, with methods using higher heat and longer drying times having greater negative impact. A sample of fresh whole plant material found to contain 33 g/kg dry weight (3.1 g/kg wet) decreased to below a third after warm-air convection drying. Much higher concentrations of volatile compounds are achieved towards the end of the growing season. [21] 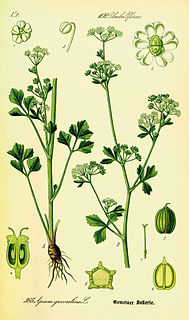 Celery is a marshland plant in the family Apiaceae that has been cultivated as a vegetable since antiquity. Celery has a long fibrous stalk tapering into leaves. Depending on location and cultivar, either its stalks, leaves or hypocotyl are eaten and used in cooking. Celery seed is also used as a spice and its extracts have been used in herbal medicine.

Marjoram is a somewhat cold-sensitive perennial herb or undershrub with sweet pine and citrus flavors. In some Middle Eastern countries, marjoram is synonymous with oregano, and there the names sweet marjoram and knotted marjoram are used to distinguish it from other plants of the genus Origanum. It is also called pot marjoram, although this name is also used for other cultivated species of Origanum.

Tarragon, also known as estragon, is a species of perennial herb in the sunflower family. It is widespread in the wild across much of Eurasia and North America, and is cultivated for culinary and medicinal purposes.

Thyme is any member of the genus Thymus of aromatic perennial evergreen herbs in the mint family Lamiaceae. Thymes are relatives of the oregano genus Origanum. They have culinary, medicinal, and ornamental uses, and the species most commonly cultivated and used for culinary purposes is Thymus vulgaris.

Coriander is an annual herb in the family Apiaceae. It is also known as Chinese parsley, and in the United States the stems and leaves are usually called cilantro. All parts of the plant are edible, but the fresh leaves and the dried seeds are the parts most traditionally used in cooking. 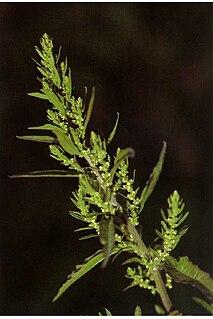 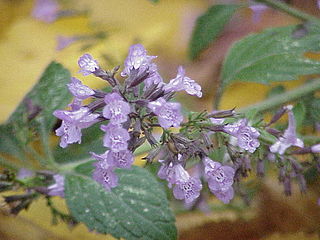 Za'atar is a culinary herb or family of herbs. It is also the name of a spice mixture typically used as a condiment, which contains the herb along with toasted sesame seeds, dried sumac, and often salt, as well as other spices. As a family of related Middle Eastern herbs, it contains plants from the genera Origanum (oregano), Calamintha, Thymus, and Satureja (savory) plants. The name za'atar alone most properly applies to Origanum syriacum, considered in biblical scholarship to be the hyssop of the Hebrew Bible. Used in Levantine cuisine, both the herb and spice mixture are popular throughout the Middle East. 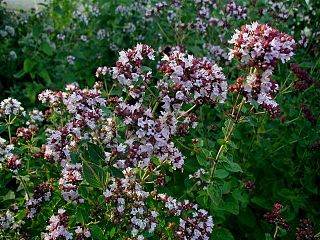 Origanum is a genus of herbaceous perennials and subshrubs in the family Lamiaceae, native to Europe, North Africa, and much of temperate Asia, where they are found in open or mountainous habitats. A few species also naturalized in scattered locations in North America and other regions.

Caryophyllene, more formally (−)-β-caryophyllene, is a natural bicyclic sesquiterpene that is a constituent of many essential oils, especially clove oil, the oil from the stems and flowers of Syzygium aromaticum (cloves), the essential oil of Cannabis sativa, rosemary, and hops. It is usually found as a mixture with isocaryophyllene and α-humulene, a ring-opened isomer. Caryophyllene is notable for having a cyclobutane ring, as well as a trans-double bond in a 9-membered ring, both rarities in nature.

Thai basil is a type of basil native to Southeast Asia that has been cultivated to provide distinctive traits. Widely used throughout Southeast Asia, its flavor, described as anise- and licorice-like and slightly spicy, is more stable under high or extended cooking temperatures than that of sweet basil. Thai basil has small, narrow leaves, purple stems, and pink-purple flowers. 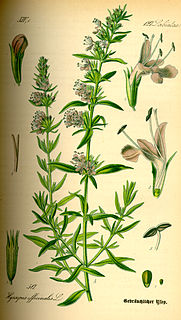 Hyssopus officinalis or hyssop is a shrub in the Lamiaceae or mint family native to Southern Europe, the Middle East, and the region surrounding the Caspian Sea. Due to its purported properties as an antiseptic, cough reliever, and expectorant, it has been used in traditional herbal medicine.