The Oregon Book Awards are presented annually by Literary Arts to honor the "state’s finest accomplishments by Oregon writers who work in genres of poetry, fiction, graphic literature, drama, literary nonfiction, and literature for young readers." [1]

Oregon Book Award was founded in 1987 by Brian Booth and Oregon Institute for Literary Arts (OILA). [2] [3] In 1993, Literary Arts, a statewide non-profit organization dedicated to enriching the lives of Oregonians through language and literature, joined with the OILA and continued to support and promote Oregon's authors with the book awards and Oregon Literary Fellowships. Award winners are selected based solely on literary merit by out-of-state judges who change each year.

In 2005 the award ceremony was moved from the Scottish Rite Center to the Wonder Ballroom, in an effort to make it more lively and fun. [4] Since 2009, the awards ceremony has been held at the Gerding Theatre at the Armory, the home of Portland Center Stage. [5]

Ken Kesey Award for the Novel

Rita Frances Dove is an American poet and essayist. From 1993 to 1995, she served as Poet Laureate Consultant in Poetry to the Library of Congress. She is the first African American to have been appointed since the position was created by an act of Congress in 1986 from the previous "consultant in poetry" position (1937–86). Dove also received an appointment as "special consultant in poetry" for the Library of Congress's bicentennial year from 1999 to 2000. Dove is the second African American to receive the Pulitzer Prize for Poetry, in 1987, and she served as the Poet Laureate of Virginia from 2004 to 2006. Since 1989, she has been teaching at the University of Virginia in Charlottesville, where she held the chair of Commonwealth Professor of English from 1993 to 2020; as of 2020 she holds the chair of Henry Hoyns Professor of Creative Writing. 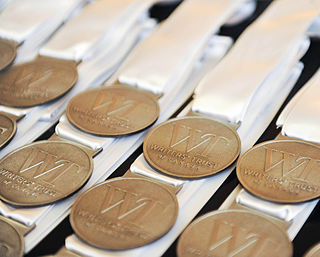 The Writers' Trust of Canada is a registered charity which provides financial support to Canadian writers.

The Asian American Writers' Workshop is a nonprofit literary arts organization founded in 1991 to support Asian American writers, literature and community. Cofounders Curtis Chin, Christina Chiu, Marie Myung-Ok Lee, and Bino A. Realuyo created AAWW because they were searching for New York City community of writers of color who could provide support for new writers. 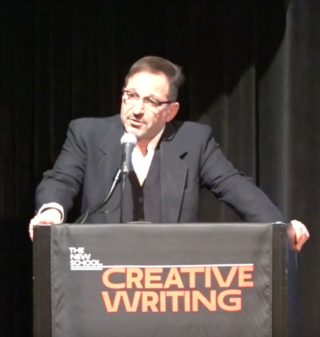 David Biespiel is an American poet, memoirist, and critic born in 1964 and raised in the Meyerland section of Houston, Texas. He is the founder of the Attic Institute of Arts and Letters in Portland, Oregon and Poet-in-Residence at Oregon State University.

The ACT Writing and Publishing Awards are an Australian literary award presented by the ACT Writers Centre for the best books in the categories of non-fiction, fiction, poetry and children's literature written in the Canberra region. They have been awarded since 2004. The winners in each category receive a $500 prize.

David Mura is an American author, poet, novelist, playwright, critic and performance artist whose writings explore the themes of race, identity and history. In 2018, Mura published a book on creative writing, A Stranger’s Journey: Race, Identity & Narrative Craft in Writing, in which he argues for a more inclusive and expansive definition of craft.

Victoria Chang is an American poet, writer, editor, and critic.

Sandra Stone was an Oregon-based visual and conceptual artist as well as a poet, playwright and author of literary fiction and nonfiction.

Nancy K. Pearson is an American poet. She is the author of The Whole by Contemplation of a Single Bone and Two Minutes of Light.

The Texas Institute of Letters is a non-profit Honor Society founded by William Harvey Vann in 1936 to celebrate Texas literature and to recognize distinctive literary achievement. The TIL’s elected membership consists of the state’s most respected writers of fiction, nonfiction, poetry, journalism, and scholarship. Induction into the TIL is based on literary accomplishments. Application for membership is not accepted. The rules governing the selection of members and officers are contained in the TIL By-Laws. The TIL annually elects new members, gives awards to recognize outstanding literary works, and supports the Dobie Paisano Fellowship Program for writers.

Ned Balbo is an American poet, translator, and essayist.

Shane McCrae is an American poet, and is currently Poetry Editor of Image.

Prime Minister's Awards for Literary Achievement is a New Zealand literary award established in 2003 by the Arts Council of New Zealand Toi Aotearoa, the national arts development agency of the New Zealand government. Each winner in three categories of fiction, nonfiction and poetry receives a monetary award of NZ$60,000.

The Christopher Hewitt Award is an annual literary award given each June by A&U magazine for writing that addresses or relates to HIV/AIDS. One award is given in each of four categories: fiction, poetry, creative nonfiction, and drama. Awards were first given in 2013. The winners for 2013 were Lisa Sandlin (fiction), Dorothy Alexander (poetry), Terry Dugan, and Evan Guilford-Blake (drama).

Justin Hocking is an American essayist and writer of memoir, literary nonfiction, and short stories.