Orlando Zapata Tamayo (May 15, 1967 [1] – February 23, 2010) was a Cuban political activist and a political prisoner [2] who died after hunger striking for more than 80 days. [3] His death received international attention, and was viewed as a significant setback in Cuba's relationship with the U.S. the EU and the rest of the world.

Orlando Zapata was the second son of a family of five brothers based in Banes, where he lived with his mother, a washerwoman by profession, and his stepfather. Looking for a better future, he emigrated to Havana, where he came into contact with former political prisoner Enri Saumell Peña, with whom he began in political activism. He was a member of the Republican Alternative Movement. [4]

Zapata was arrested on December 6, 2002 by agents of the Cuban police on charges of contempt, for which he was imprisoned for over three months. On March 20, 2003, 13 days after he was freed, he was arrested for a second time during a crackdown on dissidents and sent to the Kilo 7 prison in Camagüey. At the time of his arrest, he was participating in a hunger strike organized by the Assembly to Promote a Civil Society, taking place at the home of Marta Beatriz Roque Cabello. [2] The hunger strike was meant as a petition for the release of several comrades.

He was charged with contempt, public disorder, and disobedience and sentenced to 36 years in prison after several judicial processes. [5] As a result, Amnesty International recognized him as a prisoner of conscience, "imprisoned solely for having peacefully exercised [his] rights to freedom of expression, association and assembly". [2] [6] The socialist Monthly Review , in contrast, expressed skepticism of Amnesty's statement, alleging that Zapata was arrested and convicted several times on charges of fraud, firearm possession, and assault with a machete. [7]

Orlando Zapata Tamayo was moved around several prisons, including Quivicán Prison, Guanajay Prison, and Combinado del Este Prison in Havana. Amnesty International reported that on October 20, [8] [9] 2003 Orlando "was dragged along the floor of the Combinado del Este Prison by prison officials after he requested medical attention, leaving his back full of lacerations." Orlando managed to smuggle a letter out following a brutal beating that was published by Cubanet in April of 2004:

"My dear brothers in the internal opposition in Cuba. I have many things to say to you, but I did not want to do it with paper and ink, because I hope to go to you one day when our country is free without the Castro dictatorship. Long live human rights, with my blood I wrote to you so that this be saved as evidence of the savagery we are subjected to that are victims of the Pedro Luis Boitel political prisoners [movement]."* This type of mistreatment went on for years. Orlando Zapata Tamayo was pushed into undergoing hunger strikes as a last measure to try to save his own life, and dignity as a human being.

On either December 2 or 3, 2009, Zapata began a hunger strike [10] as a protest against the Cuban government for having denied him the choice of wearing white dissident clothes instead of the designated prisoner uniform, as well as denouncing the living conditions of other prisoners. As part of his claim, Zapata was asking for conditions comparable to those that Fidel Castro had while incarcerated after his 1953 attack against the Moncada Barracks. [11] For their part, the Cuban government stated he refused food because authorities wouldn't put a TV set, a stove and a phone in his cell. [12]

During the hunger strike Zapata refused to eat any food other than his mother's, who visited him every three months. According to the U.S.-based opposition group Cuban Democratic Directorate, prison authorities then denied Zapata water, which led to his deteriorated health and ultimately kidney failure. [10]

Zapata persisted in the hunger strike and was admitted to the Camagüey Hospital at an unspecified date, where he was given fluids intravenously against his will. On February 16, 2010 his condition worsened and he was transferred to Hermanos Ameijeiras Hospital in Havana, [13] where he ultimately died on February 23, 2010 at approximately 3:30 pm EST. [3]

It was the first time that an opponent of the Cuban government died during a hunger strike since the 1972 death of Pedro Luis Boitel. [14]

On March 16, 2010 an open letter condemning the Cuban government for the unjust incarceration of Orlando Zapata Tamayo and asking for the release of other political prisoners was posted in an internet blog. In less than a week the letter had obtained over 30,000 signatures. Among the signatories are prominent intellectuals from both the left and right of the political spectrum. [15]

The death of dissident Orlando Zapata Tamayo leads to clampdown in Cuba. Cuban security forces rounded up political activists across the island to prevent protests at the funeral of a leading dissident who died after an 82-day hunger strike. [16] The official response was disproportionate. Massive arrests, the cutting off of phone services, and an intense campaign to kill the reputation of the deceased took place in the official media. With regards to Zapata, Cuban Television News said that he had a “long criminal history” and even transmitted a hidden camera recording of his mother inside the hospital, violating every ethical principle of privacy

But, despite defamation and repressive acts, they could not prevent the news from shaking all of Cuba, nor several international organizations condemning what had happened, nor the main international media reporting the death, nor Orlando Zapata Tamayo becoming a point of confluence for the democratic forces.

There were days of social mourning and, at the same time, it was a small victory over the Communist Party because we managed to take away their monopoly on reporting about the life of the nation. Unlike the death of the student leader Pedro Luis Boitel, in 1972 after a hunger strike, Zapata’s death was reported with sufficient immediacy to provoke extensive repulsion. Months after his sacrifice, the process of releasing the prisoners of the Black Spring began. [17]

Raúl Castro took the "unprecedented step" of expressing public regret about the death of Zapata. [12] During his remarks, he said Zapata was treated by top doctors and denied he was tortured. [12] Cuban state television also aired a report where doctors who treated Zapata, said they tried to get him to eat, with Dr. María Ester Hernández stating:

We explained to him the consequences of his decision at every turn and how much he was endangering his life with this. But he kept it up. [12]

During a plenary session of the European Parliament, MEPs condemned the cruel death of the imprisoned political dissident and voted on a join resolution calling for more respect for the human rights of the prisoner in Cuba. A large majority of MEPs backed the resolution which was tabled by all the political groups in the parliament. [18]

The U.S. State Department stated that it was "deeply saddened" by Zapata's death, while the European Union called on Cuba to release its remaining political prisoners. Spain issued a statement remembering Zapata as a "human rights defender", while France expressed "dismay" and stated that its government had been lobbying Cuba on Zapata's behalf. [19] The incident was seen as a significant setback for the thawing of Spanish-Cuban and U.S.-Cuban relations, with one analyst describing it as "the nail in the coffin of Spain's efforts to improve EU-Cuba ties". [20]

On 23 February 2012, the Ladies in White met at the former home of deceased leader Laura Pollan to commemorate the second anniversary of Zapata's death. They were protested by a group of government supporters in coordination with security agents, who chanted "Down with the worms!" and "Long Live Raúl!" [21] 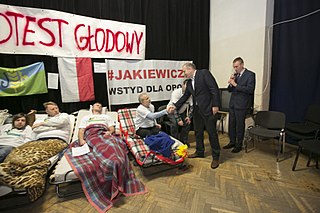 A hunger strike is a method of non-violent resistance or pressure in which participants refuse to eat as an act of political protest, or to provoke the feelings of guilt in others, usually to achieve a specific goal, such as a policy change. Most hunger strikers will ingest liquids, but not solid food.

The Cuban dissident movement is a political movement in Cuba whose aim is to replace the current government with a liberal democracy. According to Human Rights Watch, the Cuban government represses nearly all forms of political dissent. 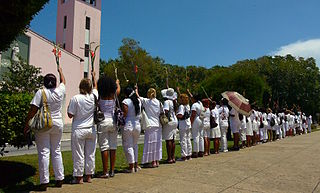 Ladies in White is an opposition movement in Cuba founded in 2003 by wives and other female relatives of jailed dissidents. The women protest the imprisonments by attending Mass each Sunday wearing white dresses and then silently walking through the streets dressed in white clothing. The color white is chosen to symbolize peace.

Pedro Luis Boitel was a Cuban poet and dissident who opposed the governments of both Fulgencio Batista and Fidel Castro. In 1961, the regime sentenced him to 10 years in prison.

Vladimiro Roca Antúnez is a Cuban dissident and leader of the illegal Cuban Social-Democratic Party. A member of the "Group of Four", he was imprisoned from 1997 to 2002 after co-authoring a paper calling for democratic reforms.

Sebastian Arcos Bergnes was a Cuban human rights activist. A prominent Cuban dissident, he was openly adversarial to the dictatorships of Fidel Castro and Fulgencio Batista.

Marta Beatriz Roque Cabello is a Cuban political dissident. She is an economist by training, and the founder as well as director of the Cuban Institute of Independent Economists. Agence France-Presse described her in 2007 as Cuba's "leading woman dissident".

Guillermo Fariñas Hernández is a Cuban doctor of psychology, independent journalist and political dissident in Cuba. He has conducted 23 hunger strikes over the years to protest various elements of the Cuban government and spent more than 11 years in prison. He vowed that he would die in the struggle against censorship in Cuba.

Jorge Luis García Pérez is a human rights and democracy activist in Cuba.

Angel Moya Acosta is a Cuban construction worker and the founder of the Alternative Option Movement.

Luis Enrique Ferrer García is a Cuban dissident. He is married and has a daughter and a son.

Mijail Bárzaga Lugo is a Cuban dissident who worked as a freelance journalist in Havana and was incarcerated in Cuba for seven years as a prisoner of conscience recognized by Amnesty International.

Wilmar Villar Mendoza was a Cuban dissident. He was born around 1980. He married Maritza Pelegrino Cabrales and had two children. He lived in the Contramaestre area of Santiago de Cuba.

Félix Bonne Carcassés (1939-2017) was a Cuban engineering professor and dissident, best known for his 1997-2000 imprisonment as a member of the pro-democracy "Group of Four".

José Daniel Ferrer García is a Cuban human rights activist, whom the international and Spanish media claim to be "the visible head of the dissident movement in the interior of the island since the death of Oswaldo Payá, in July 2012”. 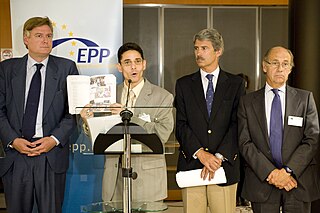 Normando Hernández González is a Cuban writer and journalist who now lives in the United States.

Danilo Maldonado Machado, known as El Sexto, born April 1, 1983, is a Cuban graffiti artist and human rights activist who has been arrested and imprisoned several times in Cuba. He was arrested in the United States in 2018 and charged with aggravated stalking, which involves a credible threat to harm the victim. He was convicted in 2019 of aggravated stalking and served one year in prison.

Dissidents in Cuba have staged many hunger strikes - but the hunger strikes of 2009 and 2010 had a significant impact, in part, because one protester died while in prison and another was near death. The negative worldwide publicity caused by the hunger strikers pressured the Cuban government to authorize a release of 52 prisoners.