Orono is a community in the Municipality of Clarington, Ontario, Canada. [2] It is located on the southern stretch of Highway 35/115, approximately 87 km (54 mi) east of Toronto.

The town was founded in 1832. A post office was opened at Orono in July 1852 (postmaster: Joseph Tucker [3] ), when the village contained about 200 residents, and was named after Orono, Maine since the landscape seemed similar. The name for the post office is said to have been selected in 1852 when a visitor from Maine suggested Orono— the name of a town near Bangor, Maine. Declared a police village in 1854, the village remained small but vibrant. Significant to the village's growth in the opening decades of the twentieth century was the arrival of the Canadian Northern Railway in 1911. Farming was, and remains, an important economic activity in the area. Many motorists stopped in the town on their way from Lindsay to Newcastle before the 35/115 was built. The population is approximately 1800.

The Municipality of Clarington, in which Orono is located, was formed through the union of the Townships of Clarke and Darlington. Historically, Orono was the seat of government for Clarke Township. Now Clarington's fourth largest urban community, Orono is attractive to those who prefer a quiet, more rural lifestyle. The downtown consists of several small shops and a central town hall that are typical of villages throughout Ontario and the northern United States.

Most of Orono's youth residents who attend public school move onto The Pines and Clarke High School, located just off the Highway 115 on the border of Newcastle; both are among the oldest active Middle and Secondary schools in the area.

The Clarke Raiders, who are the local high school hockey team, are one of the best in the district. The team boasts AAA players, and players from the local clubs of Newcastle and Orono.

The Orono Leafs, the local CC hockey club, began in the late 1990s, and still have a popular program that is successful.

There were previously 4 antique stores in the downtown core of the village, which caused Oronoto become an antiquing Mecca, drawing people from far and wide to shop for antique and vintage treasures.

Producing millions of evergreen seedlings annually for restoring Ontario's forests, the Orono Forestry Station (founded in 1922) was a prominent feature in the town until it closed down in 1996. The trails that snake throughout the station are walked daily be residents and geocachers alike.

At the centre of the village, residents and tourists enjoy the Sydney B. Rutherford Woods Walk Park, one of the many wooded areas in the village. Orono is surrounded by several pastoral hamlets, such as Kirby, Kendal, Newtonville, Leskard, Starkville; and larger towns like Newcastle and Bowmanville.

Despite its size, Orono boasts a popular zoo called Jungle Cat World, located on the north side of Orono, as well as the Orono Fair which draw people from miles around.

The nearby Brimacombe (Oshawa Ski Club), locally known as the Kirby ski hill, is a popular winter attraction, and has a dramatic landscape view of the Oak Ridges Moraine's rolling hills and farmlands at the top of the hill in the Summer season. The ski hill boasts 4 chairs, and one T-Bar. The club also provides 22 trails and two terrain parks for the paying public to use.

Orono has been a popular filming location for many years:

Scarborough or Scarboro may refer to: 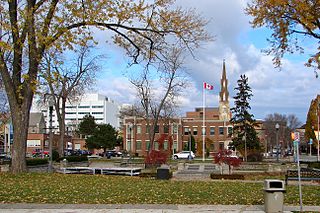 Oshawa is a city in Ontario, Canada, on the Lake Ontario shoreline. It lies in Southern Ontario, approximately 60 km (37 mi) east of Downtown Toronto. It is commonly viewed as the eastern anchor of the Greater Toronto Area and of the Golden Horseshoe. It is the largest municipality in the Regional Municipality of Durham. The name Oshawa originates from the Ojibwa term aazhawe, meaning "the crossing place" or just "a cross". 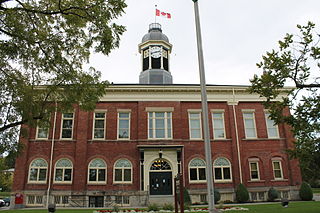 Port Hope is a municipality in Southern Ontario, Canada, approximately 109 km (68 mi) east of Toronto and about 159 km (99 mi) west of Kingston. It is located at the mouth of the Ganaraska River on the north shore of Lake Ontario, in the west end of Northumberland County. The private Trinity College School opened here in 1868.

Canada has a large domestic and foreign tourism industry. The second largest country in the world, Canada's incredible geographical variety is a significant tourist attractor. Much of the country's tourism is centred in the following regions: Toronto, Montreal, Quebec City, Vancouver/Whistler, Niagara Falls, Vancouver Island, Canadian Rockies, British Columbia's Okanagan Valley, Churchill, Manitoba and the national capital region Ottawa. The large cities are known for their culture, diversity, as well as the many national parks and historic sites.

Port Perry is a community located in Scugog, Ontario, Canada. The town is located 84 kilometres (52 mi) northeast of central Toronto and north of Oshawa and Whitby. Port Perry has a population of 9,453 as of 2016.

Hampton is a community located in the municipality of Clarington, Ontario, Canada. It was the location of the offices of Darlington Township until 1974 when it became part of the newly created Town of Newcastle as part of the municipal government restructuring that created the Regional Municipality of Durham.

Middlesex Centre is a township in Middlesex County, in southwestern Ontario, Canada, north and west of London. The Corporation of the Township of Middlesex Centre formed on January 1, 1998, with the amalgamation of the former Townships of Delaware, Lobo, and London. It is part of the London census metropolitan area.

Durham County is a historic county in Ontario, Canada. It was named for the English County Durham and city of Durham. It was created in 1792 but was later merged Northumberland County to form the United Counties of Northumberland and Durham. In 1974, the two counties were split and reorganized, with the former portions of Durham County reorganized into the Regional Municipality of Durham.

Vankleek Hill is a town in Champlain Township in Eastern Ontario. It has a population of 1,996.

Schomberg is an unincorporated village in northwestern King, Ontario, Canada. It is located north of the Oak Ridges Moraine and south of the Holland River. 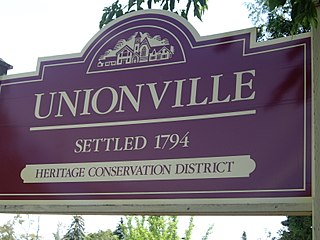 Unionville is a suburban district and former village in Markham, Ontario, Canada, 2 km west of Markham Village, and 33 km northeast of Downtown Toronto. The boundaries of Unionville are not well-defined. Several neighbourhoods claim to be part of it however, this has been disputed between the various wards. 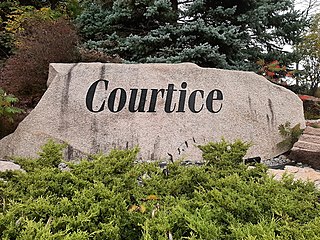 Courtice is a community in Ontario, Canada, about 60 km (37 mi) east of Toronto, adjacent to Oshawa and west of Bowmanville in the Municipality of Clarington. Courtice Road connects with Highway 401 at Interchange 425, providing arterial access to the community. Darlington Provincial Park is located just south of Courtice. 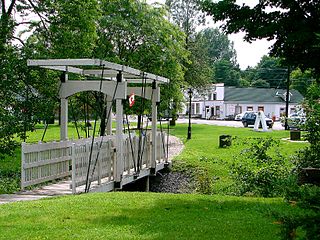 Metcalfe is a population centre located in Osgoode Ward, in the rural south-end of the city of Ottawa, Ontario, Canada. Prior to amalgamation in 2001, the community was in Osgoode Township. According to the Canada 2016 Census, it has a population of 1,776.

Kawartha Pine Ridge District School Board is a public, secular, English language school board headquartered in Peterborough, Ontario. It is the amalgamation of the former Peterborough County Board of Education and the Northumberland-Clarington Board of Education and serves the communities located in the Kawarthas to the north, and south to Lake Ontario. Hastings County is its eastern border and its western border extends to the City of Kawartha Lakes and to the edge of the City of Oshawa. 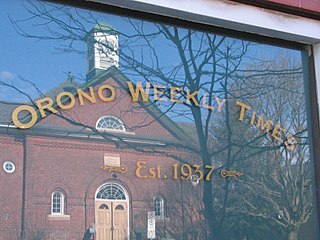 The Orono Weekly Times is a weekly newspaper published in Orono, Ontario beginning in 1937.