Last updated December 11, 2020
species of plant in the family Crassulaceae

Orostachys japonica (Japanese：爪蓮華、昭和、秀女）also known as rock pine is a species of flowering plant in the family Crassulaceae. [1] Native to East Asia. Its main habitat is on the surface of mountain rocks in Korea, Japan and China. [2] [3]

Orostachys japonica is a biennial/perennial plant growing to 10 centimetres (3.9 in). It is in flower from September to October. The flowers are hermaphrodite. The rosette leaves shape like a spatula. [3]

Because of its growing shape which resembles a pine tree's cone, and its habit of growing on mountain rocks, it is also called rock pine. [2] It grows well in a sunny or semi-shaded(light woodland) location with a well-drained and moist soil that is low in nutrients. Its flowers bloom from September to October. The flowers are white and each flower has 5 conical petals. The flower lacks a peduncle. Its calyx is divided into 5 parts. When the flowers bloom and produce seeds, it dries out.

The leaves and stems contain several medically active constituents including fatty acid esters, Friedelin and flavonoids. [2] They are antispasmodic and cytotoxic. It strengthens the immune system of our body to produce specialized antibodies, preventing some disease. It has anti-cancer effect, suppressing the propagation of cancer cells. For this reason, it uses in the treatment of tumor and other disease. In Korea, they are used in the treatment of cancer, gingivitis, coagulation and metritis. [2] 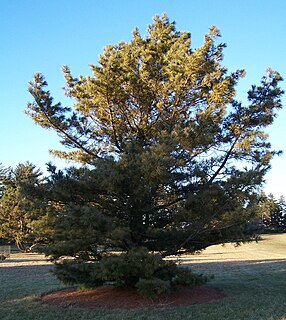 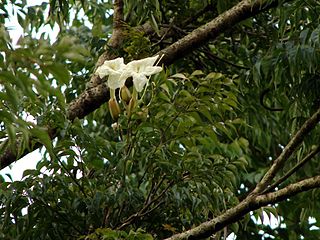 Radermachera sinica, also called china doll, serpent tree or emerald tree, is an evergreen tree in the family Bignoniaceae, native to the subtropical mountain regions of southern China and Taiwan. It can reach heights of up to 30 m tall and a trunk diameter of 1 m. The leaves are bipinnate, 20 to 70 cm long and 15 to 25 cm broad, divided into numerous small glossy green leaflets 2 to 4 cm long. The flowers are white, trumpet-like, about 7 cm long, and resembling a large Bignonia flower in shape. The flowers are night-blooming and only last for one night, wilting in the morning sun. The blooms appear spring to early summer, and are highly fragrant. 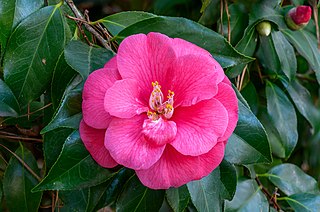 Camellia japonica, known as common camellia, Japanese camellia, or tsubaki in Japanese, is one of the best known species of the genus Camellia. Sometimes called the rose of winter, it belongs to the family Theaceae. It is the official state flower of Alabama. There are thousands of cultivars of C. japonica in cultivation, with many different colors and forms of flowers. In the U.S. it is sometimes called japonica, a name more often used in the UK for Chaenomeles.

Platycodon grandiflorus is a species of herbaceous flowering perennial plant of the family Campanulaceae, and the only member of the genus Platycodon. It is native to East Asia. It is commonly known as balloon flower, Chinese bellflower, or platycodon. 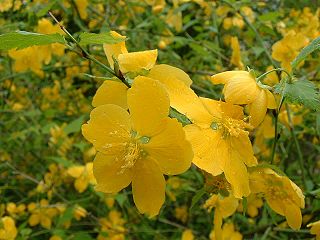 Kerria japonica, also known as the Japanese marigold bush or miracle marigold bush in the northern New England area and as yamabuki (山吹) in Japan, is a deciduous shrub in the rose family Rosaceae, native to China, Japan and Korea. It is named after William Kerr, who introduced the cultivar 'Pleniflora'. It is the sole species in the genus Kerria; its genus name is also used as a common name (kerria).

Kadsura japonica, commonly known as the kadsura vine or simply kadsura, is a plant species native to Japan in woodlands. The larvae of the moth Caloptilia kadsurae feed on K. japonica in the main Japanese islands and Ryukyu Islands. 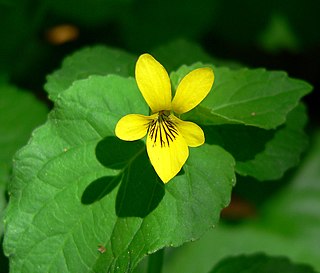 Viola glabella, the stream violet or pioneer violet, is usually found along streams or in moist woods in northeastern Asia and northwestern North America.

Indoor bonsai are bonsai cultivated for the indoor environment. Traditionally, bonsai are temperate climate trees grown outdoors in containers. Tropical and sub-tropical tree species can be cultivated to grow and thrive indoors, with some suited to bonsai aesthetics shaped as traditional outdoor or wild bonsai.

Iris japonica is a native of China and Japan. It is a species in the genus Iris, in the subgenus Limniris and within the Lophiris section. It is a rhizomatous perennial plant, with pale blue, lavender or white flowers with an orange or yellow crest. It is cultivated as an ornamental plant in temperate regions.

Zanthoxylum coreanum, the Korean lime tree, is a rare shrub that only grows in Korea and China. In Korea it is called wang-cho-pi tree and is used for many purposes. 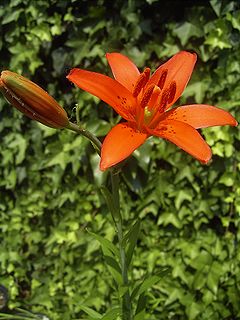 Lilium concolor is a species of flowering plant in the lily family which occurs naturally in China, Japan, Korea and Russia. Its relationship with other species is not clear, although it has some similarities to Lilium pumilum.

Achyranthes japonica, commonly known as Oriental chaff flower or Japanese chaff flower, is a perennial member of the genus Achyranthes in the family Amaranthaceae. It can be discovered on the roadside and its main distribution is in Korea and Japan. 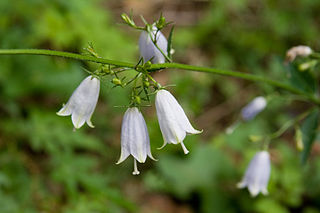 Adenophora triphylla, also known as Japanese lady bell, is one of the 62 species of Adenophora. It is a flowering plant in the family Campanulaceae that is distributed mainly over the Korean Peninsula, Japan, and China. 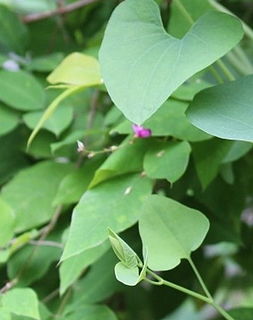 Chonemorpha fragrans, the frangipani vine or climbing frangipani, is a plant species in the genus Chonemorpha. It is a vigorous, generally evergreen, climbing shrub producing stems 30 metres or more long that can climb to the tops of the tallest trees in the forests of Southeast Asia. It has scented, white flowers and large shiny leaves. and it is native to China, India, Indonesia, Malaysia, Myanmar, Sri Lanka and Thailand. It is very commonly used in Ayurveda and it is also cultivated mostly worldwide in frost free places. 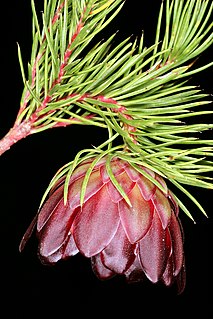 Protea nana, also known as the mountain rose or mountain-rose sugarbush, is a flowering shrub which belongs within the genus Protea.