More than 20,000 species are distributed worldwide. [1] The insects in the order have incomplete metamorphosis, and produce sound (known as a "stridulation") by rubbing their wings against each other or their legs, the wings or legs containing rows of corrugated bumps. The tympanum or ear is located in the front tibia in crickets, mole crickets, and katydids, and on the first abdominal segment in the grasshoppers and locusts. [2] These organisms use vibrations to locate other individuals.

Grasshoppers and other orthopterans are able to fold their wings (i.e. they are members of Neoptera), and they are frequently grouped with similar "Orthopteroid" insect orders.

The name is derived from the Greek ὀρθός orthos meaning "straight" and πτερόν pteron meaning "wing".

Orthopterans have a generally cylindrical body, with elongated hindlegs and musculature adapted for jumping. They have mandibulate mouthparts for biting and chewing and large compound eyes, and may or may not have ocelli, depending on the species. The antennae have multiple joints and filiform type, and are of variable length. [2]

The first and third segments on the thorax are larger, while the second segment is much smaller. They have two pairs of wings, which are held overlapping the abdomen at rest. The forewings, or tegmina, are narrower than the hindwings and hardened at the base, while the hindwing is membranous, with straight veins and numerous cross-veins. At rest, the hindwings are held folded fan-like under the forewings. The final two to three segments of the abdomen are reduced, and have single-segmented cerci. [2]

Orthopterans have a paurometabolous lifecycle or incomplete metamorphosis. The use of sound is generally crucial in courtship, and most species have distinct songs. [3] Most grasshoppers lay their eggs in the ground or on vegetation. The eggs hatch and the young nymphs resemble adults, but lack wings and at this stage are often called 'hoppers'. They may often also have a radically different coloration from the adults. Through successive moults, the nymphs develop wings until their final moult into a mature adult with fully developed wings. [2]

The number of moults varies between species; growth is also very variable and may take a few weeks to some months depending on food availability and weather conditions.

The Orthoptera is divided into two suborders, Caelifera and Ensifera (crickets) which have been shown to be monophyletic. [5] [6] [7]

Taxonomists classify members of the Caelifera and Ensifera into infraorders and superfamilies as follows: [8] [9] [10]

Several species of Orthoptera are considered pests of crops and rangelands or seeking warmth in homes by humans. The two species of Orthoptera that cause the most damage are grasshoppers and locusts. Locust are historically known for wiping out fields of crops in a day. Locust have the ability to eat up to their own body weight in a single day. [11] Individuals gather in large groups called swarms, these swarms can range up to 80 million individuals that stretch 460 square miles. [11] Grasshoppers can cause major agricultural damage but not to the documented extent as locust historically have. These insects mainly feed on weeds and grasses, however, during times of drought and high population density they will feed on crops. They are known pest in soybean fields and will likely feed on these crops once preferred food sources have become scarce. [12]

The Orthoptera include the only insects considered kosher in Judaism. The list of dietary laws in the book of Leviticus forbids all flying insects that walk, but makes an exception for certain locusts. Strangely, the dragonfly and cranefly are not kosher, but they are helpless when unable to fly. [13] The Torah states the only kosher flying insects with four walking legs have knees that extend above their feet so that they hop. [14] Thus nonjumping Orthoptera such as mole crickets are certainly not kosher.

As creators of biofuel

With new research showing promise in locating alternative biofuel sources in the gut of insects, grasshoppers are one species of interest. The insect's ability to break down cellulose and lignin without producing greenhouse gases has aroused scientific interest. [15] 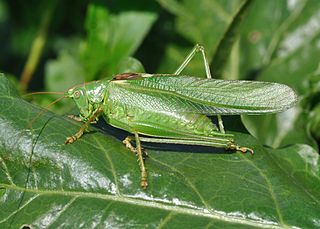 The Cooloola monster is a large burrowing orthopteran of the family Cooloolidae, a family erected to accommodate it because it is so dissimilar to other ensiferans. It was discovered in 1980 in the Great Sandy National Park in Queensland, Australia, by David C. Rentz. Further members of the genus Cooloola were later discovered at other locations in Queensland.

Mole crickets are members of the insect family Gryllotalpidae, in the order Orthoptera. Mole crickets are cylindrical-bodied insects about 3–5 cm (1.2–2.0 in) long as adults, with small eyes and shovel-like fore limbs highly developed for burrowing. They are present in many parts of the world and where they have arrived in new regions, may become agricultural pests. 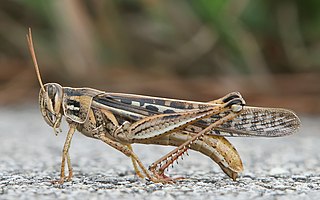 Grasshoppers are a group of insects belonging to the suborder Caelifera. They are among what is probably the most ancient living group of chewing herbivorous insects, dating back to the early Triassic around 250 million years ago. 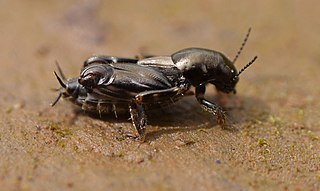 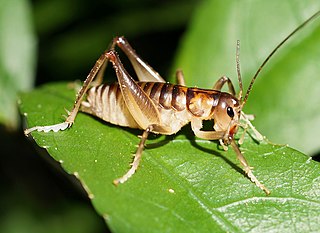 Hemiandrus is a genus of weta in the family Anostostomatidae. In New Zealand they are known as ground weta due to their burrowing lifestyle. Hemiandrus wētā are nocturnal, and reside in these burrows during the day. Ground wētā seal the entrance of their burrow during the day with a soil plug or door so that their burrow is concealed. This genus was originally said to be distributed in Australia and New Zealand, however, with recent molecular genetic methods, this is under debate. Ground weta adults are smaller than other types of wētā, with the unusual trait of having both long and short ovipositors, depending on the species. The name of this genus is said to come from this trait as hemi- mean half and -andrus means male, as the species where the female has a short ovipositor can sometimes be mistaken for a male. This genus has a diverse diet, depending on the species.

Crickets, of the family Gryllidae, are insects related to bush crickets, and, more distantly, to grasshoppers. The Gryllidae have mainly cylindrical bodies, round heads, and long antennae. Behind the head is a smooth, robust pronotum. The abdomen ends in a pair of long cerci; females have a long, cylindrical ovipositor. The hind legs have enlarged femora, providing power for jumping. The front wings are adapted as tough, leathery elytra, and some crickets chirp by rubbing parts of these together. The hind wings are membranous and folded when not in use for flight; many species, however, are flightless. The largest members of the family are the bull crickets, Brachytrupes, which are up to 5 cm (2 in) long.

The Tridactylidae are a family in the insect order Orthoptera. They are small, mole-cricket-like insects, almost always less than 20 mm (0.79 in) long when mature. Generally they are shiny, dark or black, sometimes variegated or sandy-coloured. They commonly live in short tunnels and are commonly known as pygmy mole crickets, though they are not closely related to the true "mole crickets" (Ensifera), as they are included in the Caelifera suborder.

Tridactyloidea is a superfamily in the order Orthoptera. The insects are sometimes known as pygmy mole crickets but they are Caelifera and not members of the mole cricket suborder Ensifera, unlike the true mole crickets, the Gryllotalpidae. It is composed of three families that contain a total of about 50 species. Insects in this superfamily can be 4 to 9 millimeters in length and generally have short antennae and long wings. They live along the banks of bodies of water in tropical areas and are good swimmers and jumpers. Fossils of this subfamily have been found in Siberian deposits dating back to the Cretaceous. 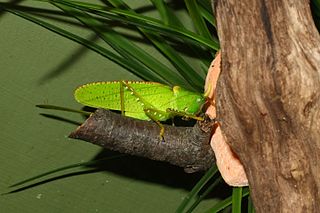 The Copiphorini are a tribe of bush crickets or katydids in the family Tettigoniidae. Previously considered a subfamily, they are now placed in the subfamily Conocephalinae. Like some other members of Conocephalinae, they are known as coneheads, grasshopper-like insects with an extended, cone-shaped projection on their heads that juts forward in front of the base of the antennae.

Grylloidea is the superfamily of insects, in the order Orthoptera, known as crickets. It includes the "true crickets", scaly crickets, wood crickets and other families, some only known from fossils.

Acrididea including the Acridomorpha is an infraorder of insects that describe the grasshoppers and ground-hoppers. It contains a large majority of species in the suborder Caelifera and the taxon Acridomorpha may also be used, which excludes the Tetrigoidea. Both names are derived from older texts, such as Imms, which placed the "short-horned grasshoppers" and locusts at the family level (Acrididae). The study of grasshopper species is called acridology.

The Tanaoceridae are an insect family in the monotypic superfamily Tanaoceroidea in the suborder Caelifera. They have been called desert long-horned grasshoppers.

The cohort Polyneoptera is a proposed taxonomic ranking for the Orthoptera and all other Neopteran insects believed to be more closely related to Orthoptera than to any other insect orders. They possess biting mouthparts, but undergo little or no metamorphosis. 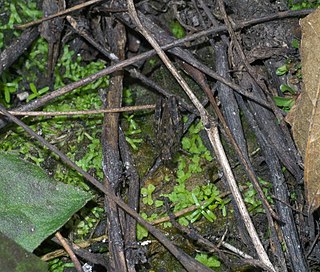 Tettigidea armata is a species in the family Tetrigidae, in the order Orthoptera. The species is known generally as the "armored pygmy grasshopper", "armoured grouse locust", or "spined grouse locust". It is found in North America.

Tettigoniidea is an infraorder of the order Orthoptera, with six extant families.

Gryllidea is an infraorder that includes crickets and similar insects in the order Orthoptera. There are two superfamilies, and more than 6,000 described species in Gryllidea.

The infraorder Tridactylidea has a single extant superfamily which includes pygmy mole crickets; they are thought to represent living representatives of the most basal Caelifera: the Orthopteran suborder that includes grasshoppers.