Orval Roy Tessier (born June 30, 1933) is a Canadian former professional ice hockey centre and coach who played three seasons in the National Hockey League for the Montreal Canadiens and Boston Bruins. Tessier played only 59 regular season games in the NHL. However, he was a solid offensive player in minor professional leagues winning two scoring titles with the EPHL's Kingston Frontenacs, voted the league's most valuable player and most sportsmanlike player in the 1961–62 season.

After playing, Tessier had a successful coaching career. In junior ice hockey, Tessier coached the Cornwall Royals to Memorial Cup victory in 1972. Tessier coached the 1981 Memorial Cup finalists, the Kitchener Rangers. The next season, Tessier was hired to coach the New Brunswick Hawks in the American Hockey League. He led the Hawks to a Calder Cup victory in 1982. Tessier was promoted, and named head coach of the Chicago Blackhawks, which lasted for three seasons.

Tessier may be best remembered for a quote during the 1983 Campbell Conference finals. After the Blackhawks gave up 16 goals in falling behind 2–0 to the Edmonton Oilers, Tessier fumed that Chicago players needed "heart transplants". The quip failed to inspire the Hawks, who dropped the final two games of the series at Chicago Stadium, marking the second consecutive year Chicago lost in the Campbell Conference final (both times, the opponent was presented the Clarence Campbell Bowl on Stadium ice). The Hawks would lose in the semifinals again in 1985, 1989 and 1990 before finally breaking through in 1992, although they would not win the Stanley Cup until 2010.

Tessier won the Stanley Cup in 2001 with the Colorado Avalanche while serving as a scout for the team.

The Chicago Blackhawks are a professional ice hockey team based in Chicago. They compete in the National Hockey League (NHL) as a member of the Central Division of the Western Conference. They have won six Stanley Cup championships since their founding in 1926. The Blackhawks are one of the "Original Six" NHL teams along with the Detroit Red Wings, Montreal Canadiens, Toronto Maple Leafs, Boston Bruins and New York Rangers. Since 1994, the club's home rink is the United Center, which they share with the National Basketball Association's Chicago Bulls. The club had previously played for 65 years at Chicago Stadium. 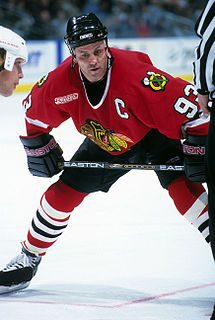 Douglas Robert Gilmour is a Canadian former professional ice hockey player. He played 20 seasons in the National Hockey League (NHL) for the St. Louis Blues, Calgary Flames, Toronto Maple Leafs, New Jersey Devils, Chicago Blackhawks, Buffalo Sabres and Montreal Canadiens. Gilmour was a seventh round selection, 134th overall, of the Blues at the 1982 NHL Entry Draft and recorded 1,414 points in 1,474 games in the NHL between 1983 and 2003. A two-time All-Star, he was a member of Calgary's 1989 Stanley Cup championship team and won the Frank J. Selke Trophy as the NHL's best defensive forward in 1992–93. Internationally, he represented Canada three times during his career and was a member of the nation's 1987 Canada Cup championship team.

William Scott Bowman, OC is a Canadian retired National Hockey League (NHL) head coach. He holds the record for most wins in league history, with 1,248 wins in the regular season and 223 in the Stanley Cup playoffs and ranks 2nd all time for most Stanley Cup victories by a player, coach or executive with fourteen. He coached the St. Louis Blues, Montreal Canadiens, Buffalo Sabres, Pittsburgh Penguins, and Detroit Red Wings. He is currently the Senior Advisor of Hockey Operations for the Chicago Blackhawks. Bowman is regarded as one of the greatest coaches in NHL history. 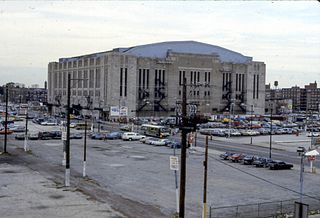 Chicago Stadium was an indoor arena in Chicago, Illinois, that opened in 1929 and closed in 1994. It was the home of the National Hockey League's Chicago Blackhawks and the National Basketball Association's Chicago Bulls.

The New Brunswick Hawks were a professional ice hockey team based in Moncton, New Brunswick. Home games were played at the Moncton Coliseum. They were a member of the American Hockey League (AHL) between 1978 and 1982. The Hawks operated as a minor league affiliate of the Chicago Black Hawks and the Toronto Maple Leafs, with a winning record each of four seasons.

Rudolph Pilous was a Canadian ice hockey player and coach, born in Winnipeg, Manitoba. Pilous won a Stanley Cup coaching the Chicago Black Hawks in 1960–61, and was inducted into the Hockey Hall of Fame in 1985 in the builder category.

Bruce James Cassidy is a Canadian former professional ice hockey player and the current head coach of the Boston Bruins of the National Hockey League (NHL). As a defenceman, he played for the Chicago Blackhawks in the NHL. He is also a former head coach of the Washington Capitals.

Patrick James "Whitey" Stapleton is a Canadian former ice hockey player. A defenceman, Stapleton played 15 seasons in the National Hockey League (NHL) and the World Hockey Association (WHA), most notably for the Chicago Black Hawks. He is the father of Mike Stapleton, who had a lengthy career in the NHL as well.

The 1990–91 Chicago Blackhawks season was the team's 65th season. After making the Conference Finals two years in a row, the Blackhawks were hosts for one of the most emotional NHL All-Star Game games in history, and finished with 106 points winning the NHL Presidents' Trophy for best record in the league. The Hawks received terrific performances from Steve Larmer, Jeremy Roenick, Chris Chelios, Dirk Graham and rookie Ed Belfour. Hockey it seemed was back in Chicago, and dreams of the first Stanley Cup since 1961 were rampant. However the playoffs matched the Hawks with their old rivals, the Minnesota North Stars, who crushed their dreams with a defeat in the first round of the 1991 Stanley Cup Playoffs - four games to two. The 1990-91 edition of the Blackhawks represented the peak of the team between the Bobby Hull/Stan Mikita era and the Jonathan Toews/Patrick Kane era, and is probably the greatest Blackhawks team of all time to never to win the Stanley Cup.

The 1991–92 Chicago Blackhawks season saw the Blackhawks finish second in the Norris Division with a record of 36 wins, 29 losses, and 15 ties for 87 points. They defeated the St. Louis Blues in six games in the Division Semi-finals and swept the first-place Detroit Red Wings in the Division Finals. After sweeping the Edmonton Oilers in the Campbell Conference Finals, the Blackhawks met the defending Stanley Cup champion Pittsburgh Penguins in the Stanley Cup Finals. However, Chicago's luck ran out against Pittsburgh, as the Penguins swept them in four straight games to capture their second straight Stanley Cup championship.

The 2008–09 Chicago Blackhawks season was the 83rd season for the National Hockey League franchise that was established on September 25, 1926. Prior to the start of the season, the Blackhawks announced that 20-year-old center Jonathan Toews would serve as the team's captain for the 2008–09 season, thus making him the 3rd-youngest player to earn that distinction in the NHL. Their regular season began on October 10, 2008, against the New York Rangers and concluded on April 12, 2009, against the rival Detroit Red Wings. The Blackhawks played in the Winter Classic, an outdoor game, against the Red Wings at Wrigley Field on January 1, 2009. The team succeeded in making the 2008–09 playoffs with a 3–1 win over Nashville on April 3 after missing the 2007–08 playoffs by three points.

The Blackhawks–Red Wings rivalry is a historic rivalry in the National Hockey League (NHL) between the Chicago Blackhawks and Detroit Red Wings. Prior to the 2013–14 league-wide divisional realignment, it was the most intense rivalry in the Central Division during the post-lockout era. They represent the two largest metro areas in the Midwest and are only separated by a 280-mile stretch of road, mostly covered by I-94. The clubs began playing each other in 1926–27, during the inaugural season for both franchises.

The 2013 Stanley Cup Finals was the championship series of the National Hockey League's (NHL) 2012–13 season, and the conclusion of the 2013 Stanley Cup playoffs. The Western Conference playoff champion Chicago Blackhawks defeated the Eastern Conference playoff champion Boston Bruins in six games to win their fifth Stanley Cup in team history. The Blackhawks also became just the eighth team to win both the Cup and the Presidents' Trophy in the same season. Chicago's Patrick Kane was awarded the Conn Smythe Trophy as the Most Valuable Player of the playoffs. 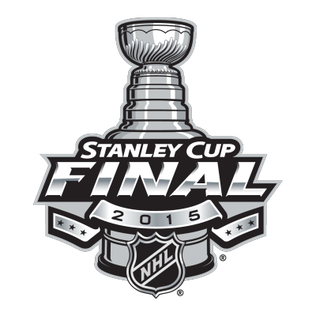 The 2015 Stanley Cup Finals was the championship series of the National Hockey League's (NHL) 2014–15 season, and the culmination of the 2015 Stanley Cup playoffs. The Western Conference champion Chicago Blackhawks defeated the Eastern Conference champion Tampa Bay Lightning four games to two to win their sixth championship in franchise history, and their third title in six seasons.