Ota, after finishing his player career, become a coach. He was coach of NEC. He was general manager of Japan Rugby Football Union when he took charge as caretaker head coach of the "Brave Blossoms", in September 2006, after the sacking of Jean-Pierre Élissalde. He announced that the new head coach of Japan would be John Kirwan, in October, remaining in office until 1 January 2007. 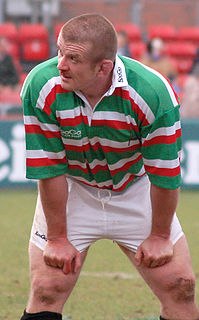 Eddie Jones is an Australian rugby union coach and former player, head coach of the England national team. He previously coached Australia between 2001 and 2005, taking the team to the 2003 Rugby World Cup Final. He was an assistant coach for South Africa when the Springboks won the 2007 Rugby World Cup and from 2012 to 2015 he coached Japan, leading them in the 2015 Rugby World Cup and their upset win over South Africa. In November 2015, Jones was appointed as head coach for England and led them to win the 2016 Six Nations Championship and the 2017 Six Nations Championship, becoming only the second international rugby team to go the entire calendar year unbeaten. He led England to the 2019 Rugby World Cup final where they lost to South Africa. 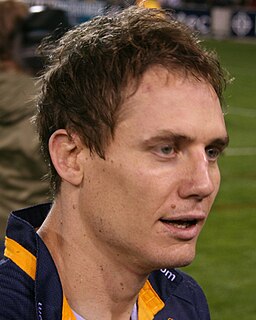 Stephen Larkham is a retired Australian rugby union player, currently in the role of senior coach for Irish provincial side Munster, who compete in the Pro14 and Champions Cup. He is best known for his career with the Brumbies in Super Rugby, for whom he played from the inception of the professional Super 12 in 1996 through 2007, and his long tenure with the Wallabies at international level, for whom he played 102 times. After initial selection at fullback from 1996 to 1997, Larkham was the first-choice Australian fly-half from 1997 to 2007, playing in the 1999, 2003 and 2007 Rugby World Cups. He is married to Jacqueline and has two children, Jaimee and Tiahna.

Gregory James Smith is a New Zealand former rugby union footballer, who played as a hooker.

Johannes Nicolaas 'Johan' Ackermann is a South African rugby union coach and former player. He played as a lock during his playing career between 1995 and 2007. He is currently head coach at Red Hurricanes. 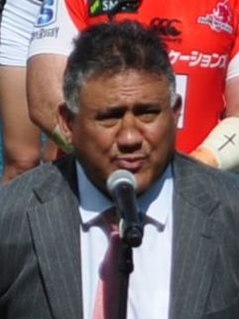 This article lists the official squads for the 1995 Rugby World Cup in South Africa from 25 May to 24 June 1995. Players marked (c) were named as captain for their national squad. All details, such as number of international caps and player age, are current as of the opening day of the tournament on 25 May 1995. 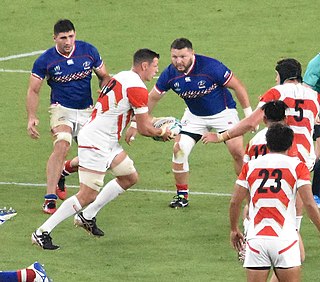 Luke Thompson is a retired Japanese rugby union player. He played as a lock and occasional flanker. He was born in Christchurch, New Zealand.

Mark Giacheri is a former Italian-Australian rugby union player and a current coach. He played as a lock.

Carlo Orlandi is a former Italian rugby union player and a current coach. He played as a hooker.

Ko Izawa, known also as Kozo Nakamura is a former Japanese rugby union player who played as a flanker.