Osleston is a hamlet which together with Thurvaston makes up the parish of Osleston and Thurvaston. The civil parish population at the 2011 Census was 267. [1] It is 7.5 miles (12.1 km) north west of Derby.

Derby is a city and unitary authority area in Derbyshire, England. It lies on the banks of the River Derwent in the south of Derbyshire, of which it was traditionally the county town. At the 2011 census, the population was 248,700. Derby gained city status in 1977.

In 1848, Osleston, (with Thurvaston), was a place, in the parish of Sutton-on-the-Hill It was recorded as having 1,588 acres (6.43 km2), of which 842 are in Orleston hamlet, and 746 in that of Thurvaston; in each is a small rural village, and the township also includes the scattered village of Cropper, where the Primitive Methodists have a place of worship. [2]

Hughenden Valley is an extensive village and civil parish within Wycombe district in Buckinghamshire, England, just to the north of High Wycombe. It is almost 8,000 acres (32 km²) in size, divided mainly between arable and wooded land.

Osmington is a village and civil parish within Dorset, England, situated on the Jurassic Coast 4 miles (6.4 km) north-east of Weymouth. In the 2011 census the parish—which includes the small settlements of Upton, Ringstead and Osmington Mills—had a population of 673.

Hazelbury Bryan is a village and civil parish in the county of Dorset in southern England. It is situated in the Blackmore Vale in the North Dorset administrative district, approximately 5 miles (8.0 km) southwest of the small town of Sturminster Newton. The parish includes the hamlets of Droop, Kingston, Parkgate, Pidney, Pleck, Wonston and Woodrow. In the 2011 census the parish had 480 dwellings, 454 households and a population of 1,059.

Newdigate is a village and civil parish in the Mole Valley borough of Surrey lying in a relatively flat part of the Weald to the east of the A24 road between Dorking and Horsham, 13 miles (21 km) ESE of Guildford and 25 miles (40 km) south of London. Neighbouring parishes are Charlwood, North Holmwood, South Holmwood, Leigh and Capel. 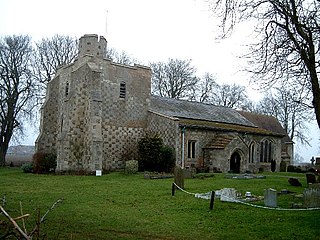 Chalgrave is a civil parish in the Central Bedfordshire district of Bedfordshire, England. The hamlets of Tebworth and Wingfield are in the west of the parish, with the church and manor in the east. Nearby places are Toddington, Chalton, Houghton Regis, and Hockliffe. Before 1929, the parish also included part of the village of Hockliffe.

Almeley is a village and civil parish in Herefordshire, England. The civil parish includes the hamlets of Almeley Wooton and Upcott. The 2011 Census recorded the parish's population as 601.

Wood Dalling is a village and civil parish in Norfolk, England. It is located 8 miles (13 km) south of Holt and 3 miles (4.8 km) north of Reepham, the nearest market towns. 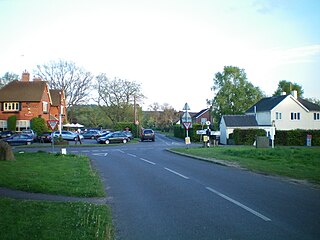 Milland is a village and civil parish in the Chichester district of West Sussex, England. It is situated north of the A272 road on the border with Hampshire.

Cropper may refer to:

Brailsford is a small red-brick village and civil parish in Derbyshire on the A52 midway between Derby and Ashbourne. The civil parish population at the 2011 Census was 1,118. The village has a pub, a post office and a school. There are many fine houses in the district including two 20th century country houses: Brailsford Hall built in 1905 in Jacobean style, and Culland Hall.

Sutton-on-the-Hill is a parish in south Derbyshire eight miles (13 km) west of Derby. The population of the civil parish taken at the 2011 Census was 123. The village is widely spread out and contains both a church and a chapel. It was described as "a parish, with two townships and a hamlet" in the 1870s. Now it has no shop, post office and has limited public transport links. It does however have a chapel and a fine church, which unlike most of the village, is on the hill.

Idsworth is an isolated hamlet with medieval village origins in the East Hampshire district and South Downs National Park in Hampshire, England. The small population means the place is one of a few small old parishes in the area in a civil parish in terms of the third tier of local government, namely Rowlands Castle. 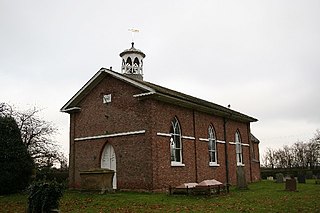 Carrington is a village and civil parish in the East Lindsey district of Lincolnshire, England. It is situated approximately 7 miles (11 km) north from the market town of Boston.

Candlesby with Gunby is a civil parish in the East Lindsey district of Lincolnshire, England, about 5 miles (8.0 km) east of the town of Spilsby, and includes the village of Candlesby and hamlet of Gunby, the population of which in 2001 was 178, reducing to 129 at the 2011 Census.