Oswald Bertram Lower (born 1863 in Adelaide, South Australia — died 18 March 1925 in Wayville, South Australia) [1] was an Australian chemist and pharmacist who is best known for his contributions to entomology, in particular butterflies and moths. [2] 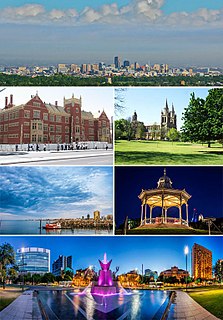 Adelaide is the capital city of the state of South Australia, and the fifth-most populous city of Australia. The demonym Adelaidean is used to denote the city and its residents.

The following lists events that happened during 1933 in Australia.

The following lists events that happened during 1932 in Australia. 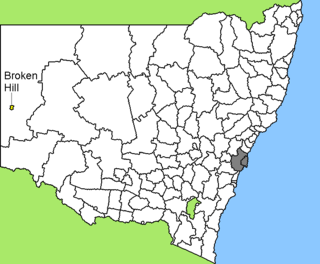 The City of Broken Hill is a local government area in the Far West region of New South Wales, Australia. The area contains an isolated mining city, Broken Hill, located in the outback of New South Wales and is surrounded by the Unincorporated Far West Region. The City is located adjacent to the Silver City and Barrier Highways and the Broken Hill railway line.

Oswald Milne Bertram was an Australian rules footballer who played with South Melbourne and St Kilda in the VFL during the 1930s.

Josiah Thomas was an Australian politician. He was elected to the House of Representatives at the inaugural 1901 federal election, representing the Labor Party. Thomas served as a minister in Andrew Fisher's first two governments, as Postmaster-General and Minister for External Affairs (1911–1913). He joined the Nationalist Party after the 1916 Labor split and transferred to the Senate at the 1917 election, serving as a Senator for New South Wales from 1917 to 1923 and from 1925 to 1929.

Cornish Australians are citizens of Australia who are fully or partially of Cornish heritage or descent, an ethnic group native to Cornwall in the United Kingdom. They form part of the worldwide Cornish diaspora, which also includes large numbers of people in the US, Canada, New Zealand, South Africa, Mexico and many Latin American countries. Cornish Australians are thought to make up around 4.3 per cent of the Australian population and are thus one of the largest ethnic groups in Australia and as such are greater than the native population in the UK of just 532,300.

Zelleria cremnospila is a moth of the family Yponomeutidae. It was described by Oswald Bertram Lower in 1900 and is found in Australia.

The Incident at Petrich, or the War of the Stray Dog, was a Greek–Bulgarian crisis in 1925, in which there was a short invasion of Bulgaria by Greece near the border town of Petrich, after the killing of a Greek captain and a sentry by Bulgarian soldiers. The incident ended after a decision of the League of Nations.

Metasia achroa is a species of moth of the family Crambidae described by Oswald Bertram Lower in 1903. It is known from Australia.

Lion Brewing and Malting Company of Jerningham Street, Lower North Adelaide was one of the many breweries which proliferated in Australia in the nineteenth-century. In those days beer was much cheaper than now; the wholesale price was 1/ a gallon, but transport was expensive, and small breweries were to be found all over the country. Most of these have now disappeared, having either closed down or become merged in larger businesses. Lion Brewing and Malting eventually confined itself to malting barley and manufacture of aerated waters and cordials.

Walter Alfred Hamilton was an Australian politician. He was a public accountant, auditor and general manager before entering politics.

Assara proleuca is a species of snout moth in the genus Assara. It was described by Oswald Bertram Lower in 1903 and is found in Australia.

Calguia deltophora is a species of snout moth in the genus Calguia. It was described by Oswald Bertram Lower in 1903. It is found in Australia.

The 1929 Victorian state election was held in the Australian state of Victoria on Saturday 30 November 1929 to elect the 65 members of the state's Legislative Assembly.

The Barrier Miner was a daily English language broadsheet newspaper published in Broken Hill in far western New South Wales from 1888 to 1974.

Scoparia leucomela is a moth in the family Crambidae. It was described by Oswald Bertram Lower in 1893. It is found in Australia, where it has been recorded from South Australia and Western Australia.

Lower is a surname. Notable people with the surname include:

Thomas John Greenway FIC, generally known by as T. J. or perhaps T. J. S. Greenway, was an English metallurgist and mining manager in Australia, closely associated with the development of the Broken Hill mines.