The Otira Tunnel is a railway tunnel on the Midland Line in the South Island of New Zealand, between Otira and Arthur's Pass. It runs under the Southern Alps from Arthur's Pass to Otira – a length of over 8.5 kilometres (5.3 mi). The gradient is mainly 1 in 33, and the Otira end of the tunnel is over 250 m (820 ft) lower than the Arthur's Pass end.

Construction commenced in 1907 and a "breakthrough" celebration was held on 21 August 1918 by the Minister of Public Works Sir William Fraser. When the tunnel opened on 4 August 1923, it was the seventh longest tunnel in the world and the longest in the British Empire. [1]

The Midland Railway Company investigated alternatives to a long tunnel, but a line over the pass with gradients of 1 in 50 on both sides was not practical. Other options for a line over the pass were a cable-hauled system or a line of 1 in 15 gradient using either the Fell system or a rack railway using the Abt system (or even an S-shaped tunnel under Mount Rolleston). However, the government did not favour the Fell system as used on the Rimutaka Incline which was expensive to operate. After taking over the line the government decided in 1900 on a 10 km long straight tunnel with a gradient of 1 in 37, but after expert advice opted two years later for an 8.55 km tunnel at the slightly steeper gradient of 1 in 33. [2]

A contract to build the tunnel in five years was let to the engineering firm of John McLean and Sons who started at the Otira end in 1908, using the "drill and blast" method. With progress difficult and slow McLeans asked to be relieved from the contract in 1912, and were financially ruined (the tunnel cost over twice the contract price of £599,794 ($1,200,000). The government could find no other tenderers, so the work was taken over by the Public Works Department. The government considered halting construction in World War I, but the Imperial Government requested that work should continue in case the German navy blockaded the West Coast ports used for coal shipment. The breakthrough was on 20 July 1918, but concrete lining took a further three years, and then two more years before the tunnel opened. There were eight fatalities during construction. [3] Its opening was marked by the British and Intercolonial Exhibition. [4]

The tunnel dimensions were 4.72 metres (15 ft 6 in) high and 4.27 metres (14 ft 0 in) wide at rail level, increasing to 4.57 metres (15 ft 0 in) at the widest point. Because of its length and gradient, gases such as carbon dioxide and carbon monoxide could easily build up, potentially making the tunnel both unhealthy for the train's occupants and unworkable with steam engines. Thus, the tunnel was electrified with a 1500 V DC overhead system. A small coal-fired power station was built near Otira to provide electricity until 1941 when it was replaced by a connection to the national grid. The locomotives used were the EO class, then from 1968 the EA class. In 1988, trials began using DX class locomotives instead of electric locomotives. While the trials were unsuccessful, [5] it was found in trials held in 1991 that upgrading the DX locomotives with new air intakes and putting extraction fans on the end of the Otira tunnel could allow for the replacement of the electrification. [6]

To overcome the fume problem, a combination of a door and fans are used, similar to that used in the Cascade Tunnel in the United States of America, which was also once electrified. After a train enters the tunnel from the Otira end the door closes off the entrance, and a large fan extracts the fumes behind the train. Once the fumes have been extracted, the door is reopened. Because of the fumes, the TranzAlpine's observation cars are closed for the trip through the tunnel. [7]

Otira is a small township fifteen kilometres north of Arthur's Pass in the central South Island of New Zealand. It is on the northern approach to the pass, a saddle between the Otira and Bealey Rivers high in the Southern Alps. A possible meaning of Otira is "o" and "tira". Another possible meaning is "Oti" (finished) and "ra" (Sun), because Otira Gorge is usually in deep shadow. 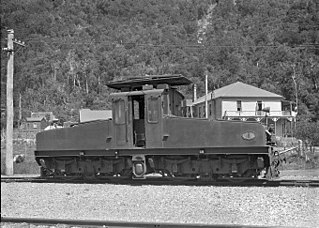 The New Zealand E class battery-electric locomotive represented the third unique type of locomotive class to be given the E classification in New Zealand. The first was the E class of nine Double Fairlie steam locomotives of 1872-75; the second E class consisted of a Mallet compound made in 1906; and as both were no longer operated by the New Zealand Railways in 1923, the classification was free to be used for a third time when the small battery-electric locomotive was delivered. This is the only time a classification has been used three times in New Zealand, though re-use happened a number of other times, arguably most notably when the A class of 1906 took the designation originally used by the A class of 1873. 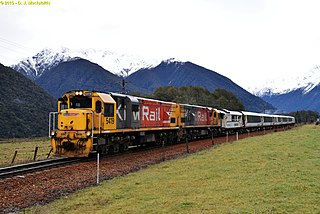 The TranzAlpine is a passenger train operated by The Great Journeys of New Zealand in the South Island of New Zealand over the Midland Line; often regarded to be one of the world's great train journeys for the scenery through which it passes. The journey is 223 kilometres (139 mi) one-way, taking almost five hours. There are 16 tunnels and four viaducts, with the Staircase Viaduct elevated as much as 75 metres (246 ft).

This is a list of jargon commonly used by railfans and railway employees in New Zealand. 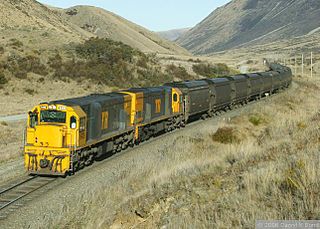 The Midland line is a 212 km section of railway between Rolleston and Greymouth in the South Island of New Zealand. The line features five major bridges, five viaducts and 17 tunnels, the longest of which is the Otira tunnel. It is the route of the popular TranzAlpine passenger train. 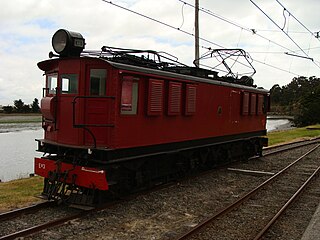 The NZR EO class of 1923 were electric locomotives used on the steep Otira to Arthurs Pass section of the Midland Line in New Zealand. They were primarily needed for pulling trains through the 1 in 33 grade 8.5 km (5.3 mi) Otira Tunnel which was too long and steep to allow steam locomotives to be used.

The New Zealand DX class locomotive is a type of 49 Co-Co diesel-electric locomotives that currently operate on New Zealand's national railway network. All locomotives are owned by KiwiRail. 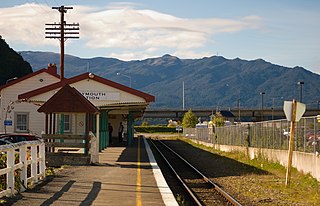 The New Zealand EA class of electric locomotives were used on the New Zealand rail network between 1968 and 1997 on the Otira – Arthur's Pass section of the Midland line in the South Island, through the Otira Tunnel. Following reconditioning, three were used by KiwiRail's Tranz Metro in Wellington from 2008 to 2011 to top and tail Metlink suburban passenger trains as an interim measure before new rolling stock arrived. Four of the five locomotives were scrapped in 2013 with one being set aside for preservation.

The Lyttelton Rail Tunnel, initially called the Moorhouse Tunnel, links the city of Christchurch with the port of Lyttelton in the Canterbury region of New Zealand's South Island. It is the country's oldest operational rail tunnel, and is on the Lyttelton Line, one of the first railways built by Canterbury Provincial Railways.

The Seddonville Branch, later truncated as the Ngākawau Branch, is a branch line railway in the West Coast region of New Zealand's South Island. Construction began in 1874 and it reached its terminus at the Mokihinui Mine just beyond Seddonville in 1895. In 1981 it was closed past Ngākawau and effectively became an extension of the Stillwater–Westport Line, since formalised as the Stillwater–Ngākawau Line.

The NZR EC class was a class of electric locomotive used in Christchurch, New Zealand. They replaced steam locomotives on trains through the Lyttelton rail tunnel between Lyttelton and Christchurch.

The NZR ED class locomotive was a type of electric locomotive used in Wellington, New Zealand. They were built by English Electric and the New Zealand Railways Department (NZR) between 1938 and 1940, and hauled mainly passenger trains on the Wellington region's 1500 V DC electrification, and banked freight trains on the steep section between Paekakariki and Pukerua Bay. 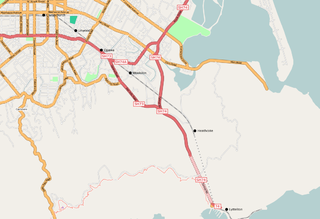 Arthur's Pass, previously called Camping Flat then Bealey Flats, and for some time officially Arthurs Pass, is a township in the Southern Alps of the South Island of New Zealand, located in the Selwyn district. It is a popular base for exploring Arthur's Pass National Park.

State Highway 73 is a major east-west South Island state highway in New Zealand connecting Christchurch on the east coast with Cass/Hokitika via the Southern Alps. It is mostly two lane, with some single-lane bridges north of Springfield but is mostly dual carriageway in Christchurch. The fourth and fifth-highest points of New Zealand's state highway network are on this road at Porters Pass and Arthur's Pass respectively.

Railway electrification in New Zealand consists of three separate electric systems, all in the North Island. Electrification was initially adopted by the New Zealand Railways for long tunnels; the Otira Tunnel, the Lyttelton Rail Tunnel and the two Tawa Tunnels of the Tawa Flat Deviation. Electrification of Wellington suburban services started with the Johnsonville Line and Kapiti Line out of Wellington from the 1930s. Auckland suburban services were electrified in 2014–2015. Electrification of long-distance services on the North Island Main Trunk (NIMT) dates from 1986. New long tunnels, for example the Rimutaka Tunnel and the Kaimai Tunnel, were operated by diesels, and the Otira and Lyttelton Tunnels have converted to diesel operation.