Ouled Moussa is a town and commune in Boumerdès Province, Algeria. According to the 2008 census it has a population of 40,692. [1] 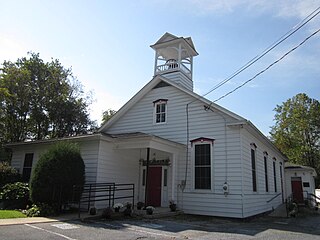 Conoy Township is a township in northwestern Lancaster County, Pennsylvania, United States. At the 2010 census the population was 3,194.

San Ramón is a municipality in the Cuscatlán department of El Salvador.

Ovcha kupel is a district (rayon) of the Stolichna Municipality of Sofia City Province, Bulgaria.

Verin Sasnashen ; formerly known as Verin Karakoymaz and Verin Sasunashen, is a village in the Aragatsotn Province of Armenia.

Fərəcan is a village in the Lachin Rayon of Azerbaijan.

Xəlfəli is a village in the Shusha Rayon of Azerbaijan.

Almalıtala is a village in the Tovuz Rayon of Azerbaijan. The village forms part of the municipality of Ağbaşlar.

Chycza-Brzóstki is a village in the administrative district of Gmina Nagłowice, within Jędrzejów County, Świętokrzyskie Voivodeship, in south-central Poland. It lies approximately 5 kilometres (3 mi) west of Nagłowice, 19 km (12 mi) west of Jędrzejów, and 46 km (29 mi) south-west of the regional capital Kielce.

Dobieszyn is a village in the administrative district of Gmina Jedlicze, within Krosno County, Subcarpathian Voivodeship, in south-eastern Poland. It lies approximately 4 kilometres (2 mi) south-east of Jedlicze, 5 km (3 mi) west of Krosno, and 45 km (28 mi) south-west of the regional capital Rzeszów.

Konohana-ku (此花区) is one of 24 wards of Osaka city, Japan. It stands at the mouth of the Yodo River. Its most famous place is the Universal Studios Japan. It will be the site of Expo 2025, a World's Fair to be held in 2025.

Konary-Kolonia is a village in the administrative district of Gmina Klimontów, within Sandomierz County, Świętokrzyskie Voivodeship, in south-central Poland. It lies approximately 7 kilometres (4 mi) north-west of Klimontów, 28 km (17 mi) west of Sandomierz, and 58 km (36 mi) south-east of the regional capital Kielce.

Borowo is a village in the administrative district of Gmina Drobin, within Płock County, Masovian Voivodeship, in east-central Poland.

Wildflower is an unincorporated community in Fresno County, California. It is located 6 miles (9.7 km) southwest of Selma, at an elevation of 269 feet.

Cook is an unincorporated community in Madison Township, Fayette County, Ohio, United States. It is located at 39°40′59″N83°18′26″W, along Cook-Yankeetown Road, just west of its intersection with U.S. Route 62/State Route 3.

Nekrasovka District is an administrative district (raion) of South-Eastern Administrative Okrug, and one of the 125 raions of Moscow, Russia. The area of the district is 11.475 square kilometers (4.431 sq mi). Population: 68,539

Işıkkaya is a village in the District of Kozan, Adana Province, Turkey.

JR Polytechnic is a college located in Alundur, Tiruchirappalli district. It was started in the year 2010 after having secured permission from the Govt. of Tamil Nadu, India.