Oxford is a city and college town in the U.S. state of Mississippi. Oxford lies 75 miles (121 km) south-southeast of Memphis, Tennessee, and is the county seat of Lafayette County. Founded in 1837, it was named after the British city of Oxford. The University of Mississippi, also known as "Ole Miss" is located adjacent to the city.

Purchasing the land from a Chickasaw, pioneers founded Oxford in 1837. In 1841, the Mississippi State Legislature selected it as the site of the state's first university, Ole Miss. Oxford is also the hometown of Nobel Prize-winning novelist William Faulkner, and served as the inspiration for his fictional Jefferson in Yoknapatawpha County. Lucius Quintus Cincinnatus Lamar, who served as a US Supreme Court Justice and Secretary of the Interior, also lived and is buried in Oxford.

Oxford and Lafayette County were formed from lands ceded by the Chickasaw people in the Treaty of Pontotoc Creek in 1832. The county was organized in 1836, and in 1837 three pioneers—John Martin, John Chisom, and John Craig—purchased land from Hoka, a female Chickasaw landowner, as a site for the town. [4] They named it "Oxford", intending to promote it as a center of learning in the Old Southwest. [5] In 1841, the Mississippi legislature selected Oxford as the site of the state university, which opened in 1848.

During the American Civil War, Oxford was occupied by Union Army troops under Generals Ulysses S. Grant and William T. Sherman in 1862; in 1864 Major General Andrew Jackson Smith burned the buildings in the town square, including the county courthouse. In the postwar Reconstruction era, the town recovered slowly, aided by federal judge Robert Andrews Hill, who secured funds to build a new courthouse in 1872.

During this period many African American freedmen moved from farms into town and established a neighborhood known as "Freedmen Town", where they built houses, businesses, churches and schools, and exercised all the rights of citizenship. [6] Even after Mississippi disenfranchised most African Americans in the 1890 Constitution of Mississippi, they continued to build their lives in the face of discrimination.

During the Civil Rights Movement, Oxford drew national attention in the Ole Miss riot of 1962. State officials, including Governor Ross Barnett, prevented James Meredith, an African American, from enrolling at the University of Mississippi, even after the federal courts had ruled that he be admitted. Following secret face-saving negotiations with Barnett, President John F. Kennedy ordered 127 U.S. Marshals, 316 deputized U.S. Border Patrol agents and 97 federalized Federal Bureau of Prisons officers to accompany Meredith. [7] Thousands of armed "volunteers" flowed into the Oxford area. Meredith traveled to Oxford under armed guard to register, but riots by segregationists broke out in protest of his admittance.

That night, cars were burned, federal law enforcement were pelted with rocks, bricks and small arms fire, and university property was damaged by 3,000 rioters. Two civilians were killed by gunshot wounds, and the riot spread into adjacent areas of the city of Oxford. [8] Order was finally restored to the campus with the early morning arrival of 3,000 nationalized Mississippi National Guard and federal troops, who camped in the city. [9]

More than 3,000 journalists came to Oxford on September 26, 2008, to cover the first presidential debate of 2008, which was held at the University of Mississippi. [10]

Oxford is in central Lafayette County in northern Mississippi, about 75 miles (121 km) south-southeast of Memphis, Tennessee.

The city is located in the North Central Hills region of Mississippi. The region is known for its heavily forested hills made up of red clay. The area is higher and greater in relief than areas to the west (such as the Mississippi Delta or loess bluffs along the Delta), but lower in elevation than areas in northeast Mississippi. The changes in elevation can be noticed when traveling on the Highway 6 bypass, since the east-west highway tends to transect many of the north-south ridges. Downtown Oxford sits on one of these ridges and the University of Mississippi sits on another one, while the main commercial corridors on either side of the city sit in valleys.

The streets in the downtown area follow a grid pattern with two naming conventions. Many of the north-south streets are numbered from west to east, beginning at the old railroad depot, with numbers from four to nineteen. The place of "Twelfth Street", however, is taken by North and South Lamar Boulevard (formerly North Street and South Street). The east-west avenues are named for the U.S. presidents in chronological order from north to south, from Washington to Cleveland; here again, there are gaps: there is no street for John Quincy Adams, who shares a last name with John Adams; "Polk Avenue" is replaced by University Avenue; and "Arthur Avenue" is lacking.

Oxford has a humid subtropical climate (Cfa) and is in hardiness zone 7b.

In addition to the historic Lafayette County Courthouse, the Square is known for an abundance of locally owned restaurants, specialty boutiques, and professional offices, along with Oxford City Hall.

Oxford is home to the National Center for Natural Products Research at the University of Mississippi's School of Pharmacy. The Center is the only facility in the United States that is federally licensed to cultivate marijuana for scientific research, and to distribute it to medical marijuana patients.

The city operates public transportation under the name Oxford-University Transit (OUT), with bus routes throughout the city and University of Mississippi campus. [30] Ole Miss students and faculty ride free upon showing University identification.

University-Oxford Airport is a public use airport located two nautical miles (4 km) northwest of the central business district of Oxford. The airport is owned by the University of Mississippi.

The University of Mississippi is a public research university that is located adjacent to Oxford, Mississippi, and has a medical center in Jackson. It is Mississippi's oldest public university and its largest by enrollment.

Pontotoc County is a county located in the U.S. state of Mississippi. It has been identified as one of the most corrupt counties in Northern Mississippi. As of the 2010 census, the population was 29,957. Its county seat is Pontotoc. It was created on February 9, 1836, from lands ceded to the United States under the Chickasaw Cession. Pontotoc is a Chickasaw word meaning "land of hanging grapes". The original Natchez Trace and the current-day Natchez Trace Parkway both pass through the southeast corner of Pontotoc County. 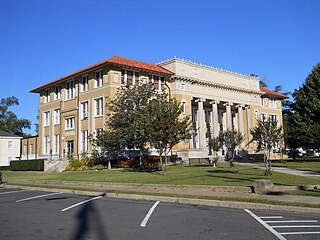 Pearl River County is a county located in the U.S. state of Mississippi. The population was 55,834 at the 2010 census. Its county seat is Poplarville.

Lowndes County is a county on the eastern border of the U.S. state of Mississippi. As of the 2010 United States Census, the population was 59,779. Its county seat is Columbus. The county is named for U.S. Congressman and slave owner William Jones Lowndes. 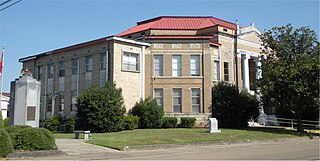 Lamar County is a county located in the U.S. state of Mississippi. As of the 2010 census, the population was 55,658. Its county seat is Purvis. Named for Confederate Lucius Quintus Cincinnatus Lamar, the county was carved out of Marion County to the west in 1904.

Lafayette County is a county in the U.S. state of Mississippi. At the 2010 census, the population was 47,351. Its county seat is Oxford. The local pronunciation of the name is "la-FAY-et." The county's name honors Marquis de Lafayette, a French military hero and American general who fought during the American Revolutionary War.

Forrest County is located in the U.S. state of Mississippi. As of the 2010 census, the population was 74,934. Its county seat and largest city is Hattiesburg. The county was created from Perry County in 1908 and named in honor of Nathan Bedford Forrest, a Confederate general in the American Civil War and the first Grand Wizard of the Ku Klux Klan. Forrest County is part of the Hattiesburg, MS Metropolitan Statistical Area. 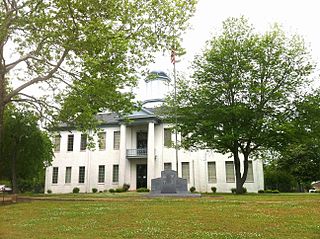 Benton County is a county located in the U.S. state of Mississippi. As of the 2010 census, the population was 8,729. Its county seat is Ashland.

Bruce is a town situated along the Skuna River in Calhoun County, Mississippi, United States. As of the 2010 census, it had a population of 1,939.

Gautier is a city in Jackson County, Mississippi, United States, along the Gulf of Mexico west of Pascagoula. It is part of the Pascagoula Metropolitan Statistical Area. The population was 18,572 at the 2010 census, up from 11,681 at the 2000 census. In 2002, Gautier had annexed land more than doubling its area.

Moss Point is a city in Jackson County, Mississippi, United States. The population was 13,704 at the 2010 census, a decline from the figure of 17,653 in 2000. The Moss Point Historic District and several individual buildings are listed on the National Register of Historic Places' Jackson County listings.

Bay Springs is a city in and the western county seat of Jasper County, Mississippi, United States. The population was 1,786 at the 2010 census, down from 2,097 at the 2000 census. State highways 15 and 18 intersect at the city. It is part of the Laurel, Mississippi micropolitan area.

Taylor is a town in Lafayette County, Mississippi. The population was 322 at the 2010 census.

Ripley is a city in Tippah County, Mississippi, United States. The population was 5,395 at the 2010 census. It is the county seat of Tippah County. 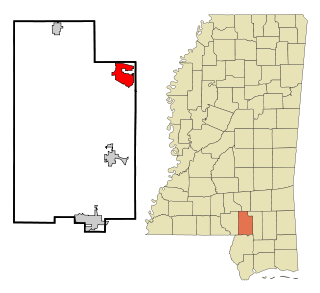 West Hattiesburg is an unincorporated area and census-designated place (CDP) in Lamar County, Mississippi, west of the city of Hattiesburg and east of the community of Oak Grove. It is part of the Hattiesburg metropolitan area. It had a decline in population from 6,305 at the 2000 census to 5,909 at the 2010 census. 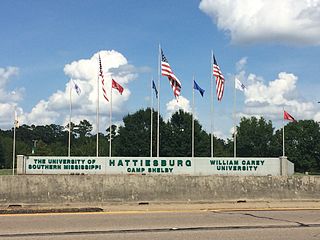 Hattiesburg is a city in the U.S. state of Mississippi, located primarily in Forrest County and extending west into Lamar County. The city population was 45,989 at the 2010 census, with the population now being 48,730 in 2020. Hattiesburg is the principal city of the Hattiesburg Metropolitan Statistical Area, which encompasses Covington, Forrest, Lamar, and Perry counties. The city is located in the Pine Belt region.

University is a census-designated place (CDP) and the official name for an area covering a portion of the University of Mississippi campus, in Lafayette County, Mississippi, United States. The CDP is surrounded by the city of Oxford. Its official United States Postal Service designation is "University, Mississippi", with a ZIP Code of 38677. 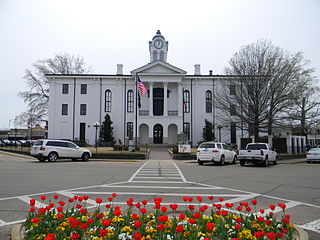 The Oxford Courthouse Square Historic District is a historic district located in Oxford, Mississippi, which is the county seat of Lafayette County. The district has existed since the city's incorporation in 1837, and was placed on the National Register of Historic Places on April 2, 1980. It serves as the cultural center of Oxford, which also contains the University of Mississippi. Several notable residents have lived in Oxford whose images contribute to the popular culture of the square, such as writer William Faulkner, whose works set in the Lafayette county-inspired Yoknapatawpha prominently feature the square. The current standing courthouse was constructed in 1871 after an original temporary one was destroyed by union troops during the American Civil War in 1864.

Wikivoyage has a travel guide for Oxford .
This page is based on this Wikipedia article
Text is available under the CC BY-SA 4.0 license; additional terms may apply.
Images, videos and audio are available under their respective licenses.