The county has major education and tourist industries and is noted for concentrations of performance motorsport,car manufacturing and technology companies. The University of Oxford is widely considered one of the leading universities in the world and is linked to a concentration of local technology and science activities at locations such as the Harwell Science and Innovation Campus,while Oxford University Press is the largest among a concentration of print and publishing firms.

As well as the city of Oxford,other centres of population are Banbury,Bicester,Kidlington and Chipping Norton to the north of Oxford;Carterton and Witney to the west;Thame and Chinnor to the east;and Abingdon-on-Thames,Wantage,Didcot,Wallingford and Henley-on-Thames to the south. All its zones south of the Thames:the Vale of White Horse and parts of South Oxfordshire were within the historic county of Berkshire,including the highest point,the 261-metre (856 ft) White Horse Hill. [5]

Oxfordshire was recorded as a county in the early years of the 10th century and lies between the River Thames to the south, the Cotswolds to the west, the Chilterns to the east and the Midlands to the north, with spurs running south to Henley-on-Thames and north to Banbury.

Although it had some significance as an area of valuable agricultural land in the centre of the country, it was largely ignored by the Romans and did not grow in importance until the formation of a settlement at Oxford in the 8th century. Alfred the Great was born across the Thames in Wantage, Vale of White Horse. The University of Oxford was founded in 1096, although its collegiate structure did not develop until later on. The university in the county town of Oxford (whose name came from Anglo-Saxon Oxenaford = "ford for oxen") grew in importance during the Middle Ages and early modern period. The area was part of the Cotswolds wool trade from the 13th century, generating much wealth, particularly in the western portions of the county in the Oxfordshire Cotswolds. Morris Motors was founded in Oxford in 1912, bringing heavy industry to an otherwise agricultural county. The importance of agriculture as an employer declined rapidly in the 20th century; currently[ when? ] under one percent of the county's population are involved due to high mechanisation.[ citation needed ] Nevertheless, Oxfordshire remains a very agricultural county by land use, with a lower population than neighbouring Berkshire and Buckinghamshire, which are both smaller.

The Oxfordshire and Buckinghamshire Light Infantry, the main army unit in the area, was based at Cowley Barracks on Bullingdon Green, Cowley.

Oxfordshire includes parts of three Areas of Outstanding Natural Beauty. In the north-west lie the Cotswolds; to the south and south-east are the open chalk hills of the North Wessex Downs and the wooded hills of the Chilterns. The north of the county contains the ironstone of the Cherwell uplands. Long-distance walks within the county include the Ridgeway National Trail, Macmillan Way, Oxfordshire Way and the D’Arcy Dalton Way.

From the mid-point western edge to the southeast corner of Oxfordshire, via the city in the middle, runs the Thames with its flat floodplains. This river forms the historic limit with Berkshire, remaining so on some lowest reaches. The Thames Path National Trail follows the river from upper estuary to a source.

Many smaller rivers in the county feed into the Thames, such as the Thame, Windrush, Evenlode and Cherwell. Some of these have trails running along their valleys. The Oxford Canal links to the Midlands and follows the Cherwell from Banbury via Kidlington into the city of Oxford, where these join the navigable Thames. About 15% of the historically named Wilts & Berks Canal, in sporadic sections, has been restored to navigability, including the county-relevant[ clarification needed ] 140 metres near Abingdon-on-Thames where it could, if restored, meet the Thames.

Oxfordshire contains a green belt area that fully envelops the city of Oxford and extends for some miles to protect surrounding towns and villages from inappropriate development and urban growth. Its border in the east extends to the Buckinghamshire county boundary, while part of its southern border is shared with the North Wessex Downs AONB. It was first drawn up in the 1950s, and all of the county's districts contain some portion of the belt.

The county is home to the local BBC Oxford News, which broadcasts from Oxford. [7] The town of Banbury in the north of the county receives BBC West Midlands and ITV Central [8]  from Birmingham as well as BBC Oxford News. Henley-on-Thames in the southeastern part of the county receives an overlap of both BBC London and BBC South as well as ITV London and ITV Meridian. The local TV transmitter for Henley [9] only broadcasts BBC and ITV programmes from London; Henley is the only town in the county within London's television region.

This is a chart of trend of regional gross value added of Oxfordshire at current basic prices published by the Office for National Statistics with figures in millions of British pounds sterling. [10]

The Oxfordshire County Council, since 2013 under no overall control, is responsible for the most strategic local government functions, including schools, county roads and social services. The county is divided into five local government districts: Oxford, Cherwell, Vale of White Horse (after the Uffington White Horse), West Oxfordshire and South Oxfordshire, which deal with such matters as town and country planning, waste collection and housing.

In the 2016 European Union referendum, Oxfordshire was the only English county as a whole to vote to remain in the European Union by a significant margin, at 57.06% (70.27% in the City of Oxford), despite Cherwell (barely) voting to leave at 50.31%.

The county has two universities: the ancient University of Oxford [15] and the modern Oxford Brookes University, which are both located in Oxford. In addition, Wroxton College, located in Banbury, is affiliated with Fairleigh Dickinson University of New Jersey. [16]

The "dreaming spires" of the University of Oxford are among the reasons for which Oxford is the sixth most visited city in the United Kingdom by international visitors. [17] Among many notable University buildings are the Sheldonian Theatre, built 1664–68 to the design of Sir Christopher Wren, and the Radcliffe Camera, built 1737–49 to the design of James Gibbs.

Blenheim Palace, close to Woodstock, was designed and partly built by the architect John Vanbrugh for John Churchill, 1st Duke of Marlborough, after he had won the battle of Blenheim. The gardens, which can be visited, were designed by the landscape gardener "Capability" Brown, who planted the trees in the battle formation of the victorious army. Sir Winston Churchill was born in the palace in 1874. It is open to the public.

Chastleton House, on the Gloucestershire and Warwickshire borders, is a great country mansion built on property bought from Robert Catesby, who was one of the men involved in the Gunpowder Plot with Guy Fawkes. Stonor Park, another country mansion, has belonged to the recusant Stonor family for centuries.

Mapledurham House is an Elizabethan stately home in the south-east of the county, close to Reading.

The Abbey in Sutton Courtenay is a medieval courtyard house. It has been recognised by the Historic Building Council for England (now Historic England) as a building of outstanding historic and architectural interest. [18] It is considered to be a ‘textbook’ example of the English medieval manor house [19] and is a Grade I-listed building. [20] 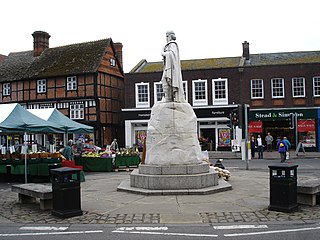 Wantage is a historic market town and civil parish in Oxfordshire, England. Although within the boundaries of the historic county of Berkshire, it has been administered as part of the Vale of White Horse district of Oxfordshire since 1974. The town is on Letcombe Brook, 8 miles (13 km) south-west of Abingdon, 24 miles (39 km) north-west of Reading, 15 miles (24 km) south-west of Oxford and 14 miles (23 km) north-west of Newbury. 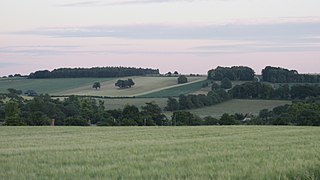 The Vale of White Horse is a local government district of Oxfordshire in England. It was historically a north-west projection of Berkshire. The area is commonly referred to as the 'Vale of the White Horse'. It is crossed by the Ridgeway National Trail in its far south, across the North Wessex Downs AONB at the junction of four counties. The northern boundary is defined by the River Thames. The name refers to Uffington White Horse, a prehistoric hill figure.

South Oxfordshire is a local government district in the ceremonial county of Oxfordshire, England. Its council is temporarily based outside the district at Abingdon-on-Thames pending a planned move to Didcot, the district's largest town. The areas located south of the River Thames are within the historic county of Berkshire.

The county of Oxfordshire in England was formed in the early years of the 10th century and is broadly situated in the land between the River Thames to the south, the Cotswolds to the west, the Chilterns to the east and The Midlands to the north, with spurs running south to Henley-on-Thames and north to Banbury. 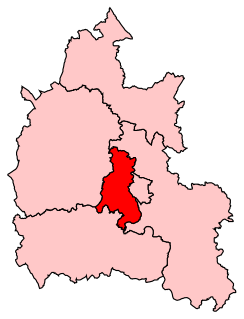 Oxford West and Abingdon is a constituency represented in the House of Commons of the UK Parliament since 2017 by Layla Moran, a Liberal Democrat. 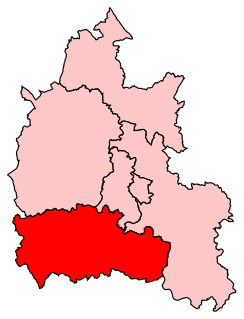 Wantage is a constituency in Oxfordshire represented in the House of Commons of the Parliament of the United Kingdom by Conservative MP David Johnston.

Henley is a constituency in Oxfordshire represented in the House of Commons of the UK Parliament since 2008 by John Howell, a Member of Parliament from the Conservative Party. He was elected in a by-election following the resignation of future Prime Minister Boris Johnson, who had taken office as Mayor of London. The constituency was established for the 1885 general election.

Banbury, also informally known as Banbury and North Oxfordshire, is a constituency in Oxfordshire created in 1553 and represented in the House of Commons of the UK Parliament since 2015 by Victoria Prentis of the Conservative Party. She currently serves as Attorney General for England and Wales.

Upton is a spring line village and civil parish at the foot of the Berkshire Downs, about 2 miles (3 km) south of Didcot in the Vale of the White Horse district. Historically in Berkshire, it has been administered as part of Oxfordshire, England, since the 1974 boundary changes. The 2011 Census recorded the parish's population as 421.

Historically, the English county of Berkshire has been bordered to the north by the ancient boundary of the River Thames. However, much of the border with Oxfordshire in the western part of the county was moved in 1974. 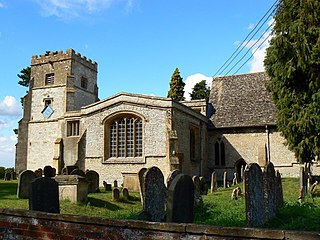 East Hendred is a village and civil parish about 4 miles (6.4 km) east of Wantage in the Vale of White Horse and a similar distance west of Didcot. The village is on East Hendred Brook, which flows from the Berkshire Downs to join the River Thames at Sutton Courtenay. Historically in Berkshire, it has been administered as part of Oxfordshire, England, since the 1974 boundary changes. The westernmost parts of the Harwell Science and Innovation Campus are in the parish. The Ridgeway and Icknield Way pass through the parish. It was called "the most well connected village in Britain" because of its connections with the railway station in Didcot and the M4 motorway. Champs Chapel Museum of East Hendred is a small museum in a former 15th century wayside chapel.

The Oxford Diocesan Guild of Church Bell Ringers is a society representing the rings and bell-ringers of the Diocese of Oxford who practice the art of change ringing. They cover the counties of Oxfordshire, Buckinghamshire and Berkshire and was established on 17 January 1881 at Reading.

The Home Counties Premier Cricket League is the top level of competition for recreational club cricket in the Home Counties of England, and has been a designated ECB Premier League since its founding in 2000. It originally served Bedfordshire, Berkshire, Buckinghamshire, Hertfordshire and Oxfordshire, although there are at present no Bedfordshire clubs in the league and all but one of the Hertfordshire clubs withdrew after the 2013 season.

Look up Oxfordshire in Wiktionary, the free dictionary.

Wikivoyage has a travel guide for Oxfordshire .