Oyster Bay (Afrikaans : Oesterbaai) is a small coastal hamlet and resort located about 22.5 kilometres (14.0 mi) west of St Francis Bay on the Eastern Cape Coast of South Africa. It forms part of the Kouga Local Municipality of the Sarah Baartman District. 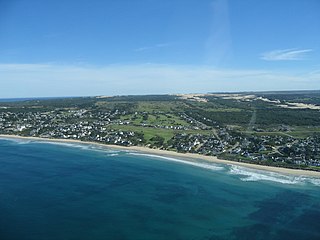 Oyster Bay is the closest community to Thyspunt, the preferred site for South Africa's next nuclear power station. [2] 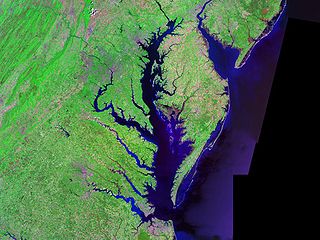 Oyster is the common name for a number of different families of salt-water bivalve molluscs that live in marine or brackish habitats. In some species the valves are highly calcified, and many are somewhat irregular in shape. Many, but not all, oysters are in the superfamily Ostreoidea.

Oyster Bay is a hamlet and census-designated place (CDP) on the North Shore of Long Island in Nassau County in the state of New York, United States. The hamlet is also the site of a station on the Oyster Bay Branch of the Long Island Rail Road and the eastern termination point of that branch of the railroad.

Oyster Bay may refer to: 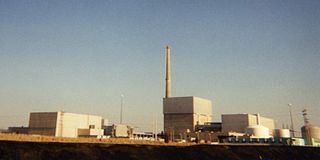 Oyster Creek nuclear power station is a single unit 636 MWe boiling water reactor power plant in the United States. The plant is located on an 800-acre (3.2 km2) site adjacent to Oyster Creek in the Forked River section of Lacey Township in Ocean County, New Jersey. The facility is currently owned and operated by Exelon Corporation and, along with unit 1 at Nine Mile Point Nuclear Generating Station, is the oldest operating commercial nuclear power plant in the United States. The plant first came online on December 1, 1969, and is licensed to operate until April 9, 2029, but Oyster Creek is scheduled to be permanently shut down by October 2018. The closure occurred on September 17. The plant gets its cooling water from Barnegat Bay, a brackish estuary that empties into the Atlantic Ocean through the Barnegat Inlet.

Oyster Bay is a suburb in Southern Sydney, in the state of New South Wales, Australia. It is located 26 kilometres south of the Sydney central business district in the local government area of the Sutherland Shire.

Oyster farming is an aquaculture practice in which oysters are bred and raised mainly for their pearls, shells and inner organ tissue, which is eaten. Oyster farming was practiced by the ancient Romans as early as the 1st century BC on the Italian peninsula and later in Britain for export to Rome. The French oyster industry has relied on aquacultured oysters since the late 18th century. 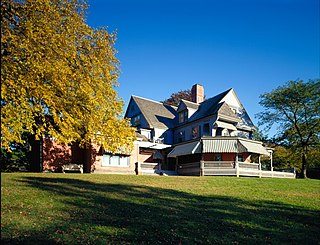 The Town of Oyster Bay is the easternmost of the three towns which make up Nassau County, New York, in the United States. Part of the New York metropolitan area, it is the only town in Nassau County to extend from the North Shore to the South Shore of Long Island. As of the 2010 census, it had a population of 293,214.

Oyster Bay is the terminus on the Oyster Bay Branch of the Long Island Rail Road. The station is located off Shore Avenue between Maxwell and Larabee Avenues. It is a sheltered concrete elevated platform that stands in the shadows of the original station, which was accessible from the ends of Maxwell, Audrey, and Hamilton Avenues. Both stations exist along the south side of Roosevelt Park.

Brazil is a coastal site near Kleinzee in the Namakwa district of the Northern Cape province of South Africa. The site is approximately 85 km west of the town of Springbok.

Schulpfontein is a coastal site near Hondeklip Bay in the Namakwa district of the Northern Cape province of South Africa. The site is approximately 95 km south-west of the town of Springbok

The Forked River Nuclear Power Plant was a proposed nuclear power plant in Lacey Township in Ocean County, New Jersey. It was proposed as a single 1,070 MW reactor in 1969 to be built by Combustion Engineering and operated by Jersey Central Power and Light. The facility would have been located on a site between JCP&L's existing Oyster Creek Nuclear Generating Station and the Garden State Parkway. Unlike the Oyster Creek Plant, the Forked River Plant would have a cooling tower to prevent the release of hot water into Oyster Creek and Barnegat Bay.

South Africa is the only country in Africa with a commercial nuclear power plant.

Duynefontein is a proposed site for new nuclear power station. It is a coastal site next to and just north of Koeberg Nuclear Power Station.