The P-700 Granit (Russian : П-700 "Гранит"; English: granite ) is a Soviet and Russian naval anti-ship cruise missile. Its GRAU designation is 3M45, its NATO reporting name SS-N-19 Shipwreck. It comes in surface-to-surface and submarine-launched variants, and can also be used against ground targets. [2] [3]

The P-700 was designed in the 1970s to replace the P-70 Ametist and P-120 Malakhit, both effective missiles but with too short a range in the face of improving weapons of U.S. Navy carrier battle groups. The missile was partially derived from the P-500 Bazalt.

Built by Chelomei/NPO Mashinostroenia, the bulging 10 m missile has swept-back wings and tail, weighs around 7,000 kilograms and can be fitted with either a 750 kg HE warhead, a FAE warhead, or a 500 kt thermonuclear warhead. A stubby cylindrical solid-fuel rocket is fitted to the rear for launch; this booster stage is released when the missile enters sustained flight. For many years it was believed that this missile used a turbojet engine during the sustained flight; after the Russian and the Western media gained access to its performance characteristics, it was understood that its propulsion system was a ramjet. [4] [5]

The P-700 has a distinctive annular air intake in the nose. Maximum speed is believed to be between Mach 1.6 and Mach 2.5. [6] Range has been estimated at 400 km, [7] 500 km, [3] and 550–625 km. [8] The guidance system is mixed-mode, with inertial guidance, terminal active radar homing guidance and also anti-radar homing. Mid-course correction is probable.

The missile, when fired in a swarm (group of 4–8) has a unique guidance mode. One of the weapons climbs to a higher altitude and designates targets while the others attack. The missile responsible for target designation climbs in short pop-ups, so as to be harder to intercept. The missiles are linked by data connections, forming a network. If the designating missile is destroyed the next missile will rise to assume its purpose. Missiles are able to differentiate targets, detect groups and prioritize targets automatically using information gathered during flight and types of ships and battle formations pre-programmed in an onboard computer. They will attack targets in order of priority, highest to lowest: after destroying the first target, any remaining missiles will attack the next prioritized target. [9] [10] Such description received some doubts. [11] The missile has a means of countering the attacking anti-missiles. Also, the on-board computer carries data designed to counter an enemy's electronic warfare and to evade counter-measures. [12] [13]

The P-700 was derived from the P-500 Bazalt missile with a turbojet. [14] The P-700 was in turn developed into the P-800 Oniks, which uses ramjet propulsion, and the BrahMos missile, a joint Indian/Russian modernization of the P-800.

Initial deployment was aboard the cruiser Kirov (now the Admiral Ushakov) in 1980 and the missile entered service on 19 July 1983. [12]

Unusually for an aircraft carrier, the Kuznetsov-class also carried 12 Granit launchers. This gave the Admiral Kuznetsov an additional primary attack capability, [15] but also had the political advantage of classing the vessel as an aircraft cruiser instead. [lower-roman 1] Unconfirmed reports say that the missiles were removed in 2000, to provide more aircraft hangar space.

The Kursk carried 24 missiles when it sank following a torpedo explosion during an exercise on 12 August 2000. The Russian navy was extremely concerned about possible NATO attempts to recover a missile and guarded the site of the wreck throughout the recovery effort. The missiles were recovered intact following a $65 million salvage operation. [16] [17] [18] [19]

The size of the missile limits the platforms on which it can operate and be launched from. [20] It has only been deployed from Oscar-class submarines, Kirov-class battlecruisers, and the Admiral Kuznetsov aircraft carrier. Ships of all three types will have their Granit missiles replaced with new launch cells to carry smaller Oniks and Kalibr [21] cruise missiles in greater numbers.

Officially - are being replaced by the Zircon (missile). [27] 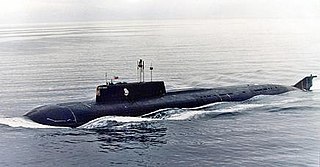 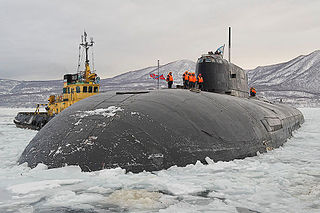 The Oscar class, Soviet designations Project 949 Granit and Project 949A Antey,, are a series of nuclear-powered cruise missile submarines designed in the Soviet Union for the Soviet Navy. They are currently in service with the Russian Navy with some of the vessels planned to be modernized as Project 949AM, to extend their service life and increase combat capabilities. 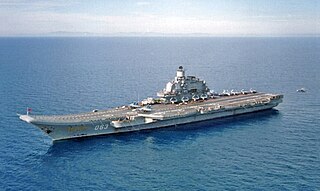 The Type 65 is a torpedo manufactured in the Soviet Union/Russia. It was developed for use against US Navy aircraft carrier battle groups, as well as large merchant targets such as supertankers and advanced enemy submarines. It is now typically fitted to newer Russian vessels, though often the 650 mm torpedo bay is fitted with a 533 mm converter to enable firing of SS-N-15 missiles or Type 53 torpedoes.

The P-500 Bazalt is a turbojet-powered, supersonic cruise missile used by the Soviet and Russian navies. Its GRAU designation is 4K80 and its NATO reporting name is SS-N-12 Sandbox, modern version is P-1000 Vulkan AShM SLCM. 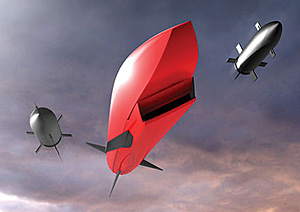 Perseus or CVS401 Perseus is a stealth hypersonic cruise missile concept study being undertaken by MBDA in consultation with the Royal Navy and French Navy.