Patrick Jake O'Rourke (born November 14, 1947) is an American political satirist and journalist. O'Rourke is the H. L. Mencken Research Fellow at the libertarian Cato Institute and is a regular correspondent for The Atlantic Monthly , The American Spectator , and The Weekly Standard , and frequent panelist on National Public Radio's game show Wait Wait... Don't Tell Me! Since 2011, he has been a columnist at The Daily Beast . [1]

In the UK, he is known as the face of a long-running series of television advertisements for British Airways in the 1990s. He is the author of 20 books, the best known of which are Holidays in Hell , a compilation of O'Rourke's articles as a free-lance foreign correspondent, All the Trouble in the World, an examination of current political concerns such as global warming and famine from a libertarian perspective.[ citation needed ]

O'Rourke was born in Toledo, Ohio, the son of Delphine (née Loy), a housewife, and Clifford Bronson O'Rourke, a car salesman. [3] [4] He graduated from Toledo's DeVilbiss High School in 1965, [5] received his undergraduate degree from Miami University in 1969 and earned an M.A. in English at Johns Hopkins University (where he was a brother of the Alpha Delta Phi fraternity) in 1970. Many of O'Rourke's essays recount that during his student days he was a leftist, anti-war hippie, but that in the 1970s his political views underwent a volte-face . He emerged as a political observer and humorist rooted in libertarian conservatism.

O'Rourke wrote articles for several publications, including "A.J. at N.Y.U." for The Rip Off Review of Western Culture , an underground magazine/comic book, in 1972, as well as pieces for the Baltimore underground newspaper Harry and the New York Ace , before joining National Lampoon in 1973, where he served as editor-in-chief, among other roles, and authored articles such as "Foreigners Around the World" [6] and "How to Drive Fast on Drugs While Getting Your Wing-Wang Squeezed and Not Spill Your Drink." [7]

He received a writing credit for National Lampoon's Lemmings which helped launch the careers of John Belushi, Chevy Chase, and Christopher Guest. He also co-wrote National Lampoon's 1964 High School Yearbook with Douglas Kenney. O'Rourke said later that Kenney brought comedy to the piece and he brought the organization. The Yearbook was a bestseller and some themes were later used in the movie Animal House .[ citation needed ]

Going freelance in 1981, O'Rourke's writing appeared in Playboy, Vanity Fair, Car and Driver , and Rolling Stone . He became foreign-affairs desk chief at Rolling Stone, where he remained until 2001. In 1996, he served as the conservative commentator in the point-counterpoint segment of 60 Minutes . During the Bosnian genocide, O'Rourke received criticism for using the American public's lack of interest in Bosnia as a way to joke about "unspellables killing the unpronouncables." [8]

O'Rourke was married to Amy Lumet, a daughter of movie director Sidney Lumet and a granddaughter of Lena Horne, from 1990 to 1993. Since 1995 he has been married to his second wife, Tina; they have two daughters, Elizabeth and Olivia, and one son, Clifford. In an interview with The New Statesman, O'Rourke revealed that his "wife is a Catholic, the kids are Catholic" and described himself as, therefore, a "Catholic fellow-traveller". The family divides their time between Sharon, New Hampshire and Washington, D.C.. [10]

In 2009, O'Rourke described the presidency of Barack Obama as "the Carter administration in better sweaters". [12] However, in 2016, he endorsed presidential candidate Hillary Clinton over Donald Trump. O'Rourke stated that his endorsement included her "lies and empty promises," and said, "She's wrong about absolutely everything, but she's wrong within normal parameters." [13]

O'Rourke was a proponent of Gonzo journalism; one of his earliest and best-regarded pieces was "How to Drive Fast on Drugs While Getting Your Wing-Wang Squeezed and Not Spill Your Drink", a National Lampoon article in March 1979. [14] The article was republished in two of his books, Republican Party Reptile (1987) and Driving Like Crazy (2009).

O'Rourke's best-received book is Parliament of Whores , subtitled A Lone Humorist Attempts to Explain the Entire U.S. Government, whose main argument, according to the author, "is that politics are boring". [15] He has described himself as a libertarian. [16]

O'Rourke types his manuscripts on an IBM Selectric typewriter, though he denies that he is a Luddite, asserting that his short attention span would make focusing on writing on a computer difficult. [17]

National Lampoon was an American humor magazine which ran from 1970 to 1998. The magazine started out as a spinoff from the Harvard Lampoon. National Lampoon magazine reached its height of popularity and critical acclaim during the 1970s, when it had a far-reaching effect on American humor and comedy. The magazine spawned films, radio, live theatre, various sound recordings, and print products including books. Many members of the creative staff from the magazine subsequently went on to contribute creatively to successful media of all types. 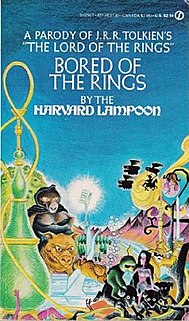 Bored of the Rings is a parody of J. R. R. Tolkien's The Lord of the Rings. This short novel was written by Henry Beard and Douglas Kenney, who later founded National Lampoon. It was published in 1969 by Signet for the Harvard Lampoon. In 2013, an audio version was produced by Orion Audiobooks, narrated by Rupert Degas. 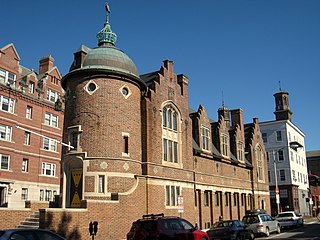 The Harvard Lampoon is an undergraduate humor publication founded in 1876 by seven undergraduates at Harvard University in Cambridge, Massachusetts. 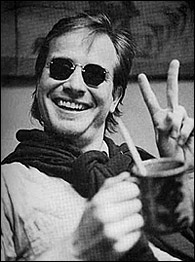 Douglas Clark Francis Kenney was an American comedy writer of magazine, novels, radio, TV and film who co-founded the magazine National Lampoon in 1970. Kenney edited the magazine and wrote much of its early material. He went on to write, produce and perform in the influential comedies Animal House and Caddyshack before his untimely death.

Thomas A. DeVilbiss High School was a public high school in Toledo, Ohio from 1931 to June 1991. It was part of the Toledo Public School District, serving students from the DeVeaux, Elmhurst, Grove Patterson, Longfellow, Mayfair, McKinley, Nathan Hale, Old Orchard, and Whittier elementary schools. The building still sits at 3301 Upton Avenue near the Central Avenue intersection.

Ed Subitzky, full name Edward Jack Subitzky, is an American writer and artist. He is best known as a cartoonist, comics artist, and humorist. He has worked as a television comedy writer and performer, a writer and performer of radio comedy, and a writer of radio drama. He has also created comedy and humor in other media. Subitzky is a member of the Screen Actors Guild-American Federation of Television and Radio Artists, and the Writers Guild of America.

Henry Nichols Beard is an American humorist, one of the founders of the magazine National Lampoon and the author of several best-selling books.

Eat the Rich: A Treatise on Economics is a 1998 book by P. J. O'Rourke which explains economics in a humorous way. Its chapters include Good Capitalism, Bad Capitalism (Albania), Good socialism (Sweden), Bad socialism (Cuba), and an intermission on "Economics 101", teaching facts that your economics professor didn't tell you, including the "ten less basic rules of economics". Subsequent chapters are on How to make everything out of nothing, How to make nothing out of everything (Tanzania), How to reform (maybe) an economy (Russia) and Eat the rich, the last an encomium to capitalism.

Cheeseface was a dog who featured on the famous "Death" Issue of the National Lampoon magazine, released January 1973. The cover, photographed by Ronald G. Harris, showed the dog with a gun pointed to his head, and the caption "If You Don't Buy This Magazine, We'll Kill This Dog". The cover was voted #7 in the Top 40 Magazine Covers of the Last 40 Years by the American Society of Magazine Editors.

Patrick Donald "Dino" Martin was an American professional basketball player and coach. He coached the Boston College Eagles men's basketball team from 1953 to 1962.

Drunk Stoned Brilliant Dead: The Writers and Artists who made National Lampoon Insanely Great by Rick Meyerowitz, is a 2010 book which was published by Abrams Books of New York. The book consists of a compilation of work by a selection of writers and artists whose work appeared in National Lampoon magazine in the 1970s, as well as introductory commentary on those people and their work, by Meyerowitz and others. The book is hardback, coffee-table sized and is profusely illustrated. 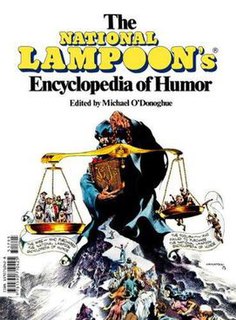 National Lampoon Encyclopedia of Humor is an American humor book that was first published in 1973 in hardback. It was a "special issue" of National Lampoon magazine, so it was sold on newsstands; however, it was put out in addition to the regular issues of the magazine.

National Lampoon 1964 High School Yearbook Parody is an American humor book that was first published in 1973. It was a spin-off from National Lampoon magazine. The book was a parody of a high school yearbook from the early 1960s. It was edited by P. J. O'Rourke and Doug Kenney and art-directed by David Kaestle. Much of the writing was by P. J. O'Rourke and Doug Kenney. The "literary magazine" was written by Sean Kelly; the sports page was by Christopher Cerf; and the Principal's Letter and the "In Memorium" piece were both by Ed Subitzky. 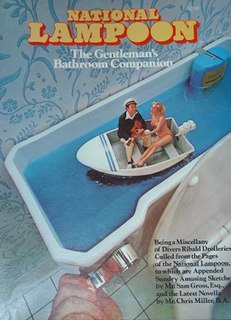 National Lampoon The Gentleman's Bathroom Companion was a humorous book that was first published in 1975. It was a "special edition" of National Lampoon magazine, and as such it was sold on newsstands in addition to that month's regular issue of the magazine. The pieces in the book were created by regular contributors to the National Lampoon including Michael O'Donoghue, Henry Beard, Doug Kenney, Sean Kelly, Tony Hendra, P.J. O'Rourke and Ed Subitzky as well as Terry Southern and William Burroughs. The content was mostly, but not entirely, compiled from material that had already been published in the magazine.

National Lampoon The 199th Birthday Book: A Tribute to the United States of America, 1776–1975 was an American humor book that was issued in 1975 in paperback. Although it appears to be a regular book, it was a "special issue" of National Lampoon magazine, and therefore was sold on newsstands rather than in bookstores. The book was a collection of new material and was not an anthology of already published material.

Republican Party Reptile, subtitled The Confessions, Adventures, Essays and (Other) Outrages of P. J. O'Rourke is a 1987 collection of essays by American satirical writer P. J. O'Rourke. O'Rourke planned to promote the book at the 1988 Republican National Convention. Though he described himself as a conservative Republican, this was not allowed, reportedly because the GOP did not appreciate O'Rourke's sense of humor. In the essay that gives its title to the collection O'Rourke describes a "Republican Party Reptile":

We are in favor of: guns, drugs, fast cars, free love, a sound dollar, and a strong military with spiffy uniforms. There are thousands of people in America who feel this way, especially after three or four drinks. If all of us would unite and work together, we could give this country.. . well, a real bad hangover." 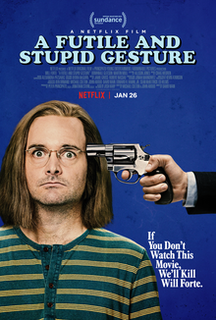 A Futile and Stupid Gesture is a 2018 American biographical comedy-drama film, based on Josh Karp's book of the same name, directed by David Wain, and written by Michael Colton and John Aboud. The film stars Will Forte as comedy writer Douglas Kenney, during the rise and fall of National Lampoon. The film had its world premiere at the 2018 Sundance Film Festival on January 24, and was released on Netflix on January 26, 2018.