PESEL (Polish Powszechny Elektroniczny System Ewidencji Ludności, Universal Electronic System for Registration of the Population) is the national identification number used in Poland since 1979. It always has 11 digits, identifies just one person and cannot be changed to another one (except some specific situations such as gender reassignment).

The PESEL was the system designed by the communist government (during PRL) to trace personal information about every citizen. It is a direct offshoot from the previous system, MAGISTER (an acronym spelling out the word 'Master', like a master's degree), which was designed to trace and record data about everyone with a university degree. [3]

PESEL number has the form of YYMMDDZZZXQ, where YYMMDD is the date of birth (with century encoded in month field), ZZZX is the personal identification number, where X codes sex (even number for females, odd number for males) and Q is a check digit, which is used to verify whether a given PESEL is correct or not.

Having a PESEL in the form of ABCDEFGHIJK, one can check the validity of the number by computing the following expression:

If the result of the last operation is not equal to the last digit (K) of a given PESEL, the PESEL is incorrect. This system works reliably well for catching one-digit mistakes and digit swaps.

9 is not equal to the last digit of PESEL, which is 8, so the PESEL number contains errors.

How to code this in TypeScript

The PESEL system has been designed to cover five centuries. To distinguish people born in different centuries, numbers are added to the MM field:

A similar system of identification numbers exists for businesses, called REGON (from Rejestr Gospodarki Narodowej – Register of the National Economy). Also all business taxpayers (prior to September 2011 – all taxpayers) have a tax identification number called NIP(Numer Identyfikacji Podatkowej).

Individuals in Poland are often asked to provide the number of their Polish identity card (dowód osobisty) as identification (foreign citizens give their passport number instead). Similarly, businesses and corporations are often required to state the number at which they appear in the register of businesses, KRS - National Judicial Register (Krajowy Rejestr Sądowy), or the Taxpayer Identification Number - NIP.

SEDOL stands for Stock Exchange Daily Official List, a list of security identifiers used in the United Kingdom and Ireland for clearing purposes. The numbers are assigned by the London Stock Exchange, on request by the security issuer. SEDOLs serve as the National Securities Identifying Number for all securities issued in the United Kingdom and are therefore part of the security's ISIN as well. The SEDOL Masterfile (SMF) provides reference data on millions of global multi-asset securities each uniquely identified at the market level using a universal SEDOL code.

A tax file number (TFN) is a unique identifier issued by the Australian Taxation Office (ATO) to each taxpaying entity — an individual, company, superannuation fund, partnership, or trust. Not all individuals have a TFN, and a business has both a TFN and an Australian Business Number (ABN). If a business earns income as part of carrying on its business, it may quote its ABN instead of its TFN.

A CUSIP is a nine-digit numeric or nine-character alphanumeric code that identifies a North American financial security for the purposes of facilitating clearing and settlement of trades. The CUSIP was adopted as an American National Standard under Accredited Standards X9.6. The acronym, pronounced as "kyoo-sip," derives from Committee on Uniform Security Identification Procedures.

A national identification number, national identity number, or national insurance number is used by the governments of many countries as a means of tracking their citizens, permanent residents, and temporary residents for the purposes of work, taxation, government benefits, health care, and other governmentally-related functions.

The National Registration Identity Card is the compulsory identity document issued to citizens and permanent residents of Singapore. People must register for an NRIC within one year of attaining the age of 15, or upon becoming a citizen or permanent resident. Re-registrations are required for persons attaining the ages of 30 and 55, unless the person has been issued with an NRIC within ten years prior to the re-registration ages.

The personal identity number is the Swedish national identification number. It is a ten or twelve digit number that is widely used in Sweden to identify individuals. 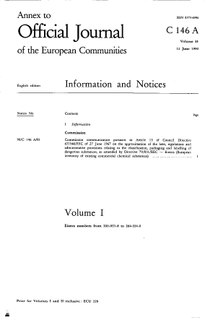 The European Community number is a unique seven-digit identifier that was assigned to substances for regulatory purposes within the European Union by the European Commission. The EC Inventory comprises three individual inventories, EINECS, ELINCS and the NLP list. 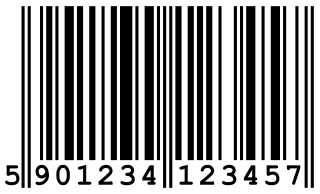 The UPU S10 standard defines a system for assigning 13-character identifiers to international postal items for the purpose of tracking and tracing them during shipping.

"Bookland" is the informal name for the Unique Country Code (UCC) prefix allocated in the 1980s for European Article Number (EAN) identifiers of published books, regardless of country of origin, so that the EAN namespace can catalogue books by ISBN rather than maintaining a redundant parallel numbering system. In other words, Bookland is a fictitious country that exists solely in EAN for the purposes of non-geographically cataloguing books in the otherwise geographically keyed EAN coding system.

The uniform civil number is a 10-digit unique string assigned to each Bulgarian citizen or resident foreign national. It serves as a national identification number. An EGN is assigned to Bulgarians at birth, or when a birth certificate is issued. The uniform system for civil registration and administrative service of population regulates the EGN system.

NHS numbers are the unique numbers allocated to registered users of the three public health services in England, Wales and the Isle of Man; the three health systems use a shared numbering scheme. It is the key to the implementation of the electronic health record, and is to be incorporated in all new software deployed within the National Health Service (NHS). 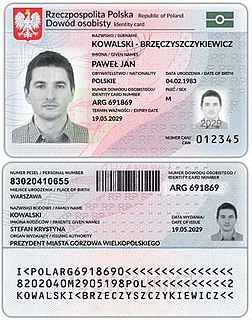 Every Polish citizen 18 years of age or older residing permanently in Poland is required to have an Identity Card issued by the local Office of Civic Affairs. Children as well as Polish citizens living permanently abroad are entitled, but not required, to have one. Identity cards are valid for a period of 10 years.

The Italian fiscal code, officially known in Italy as Codice fiscale, is the tax code in Italy, similar to a Social Security Number (SSN) in the United States or the National Insurance Number issued in the United Kingdom. It is an alphanumeric code of 16 characters. The code serves to unambiguously identify individuals residing in Italy irrespective of residency status. Designed by and for the Italian tax office, it is now used for several other purposes, e.g. uniquely identifying individuals in the health system, or natural persons who act as parties in private contracts. The code is issued by the Italian tax office, the Agenzia delle Entrate.

The Resident Identity Card is an official identity document for personal identification in the People's Republic of China. According to the second chapter, tenth clause of the Resident Identity Card Law, residents are required to apply for resident identity cards from the local Public Security Bureau, sub-bureaus or local executive police stations.