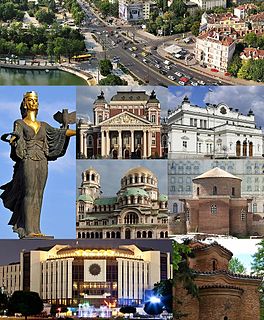 Sofia is the capital and largest city of Bulgaria. The city is at the foot of Vitosha Mountain in the western part of the country. Being in the centre of the Balkan peninsula, it is midway between the Black Sea and the Adriatic Sea, and closest to the Aegean Sea.

In sports, a reserve team is a team composed of players under contract to a specific team but who do not normally appear on the team's roster during matches. Reserve teams are usually composed of young players who need playing time in order to improve their skills, as well as members of the first team recovering from injury.

They ought to play at least one level below their main side, however, so CSKA II was ineligible for promotion to First League and could not play in the Bulgarian Cup.

The First Professional Football League is a Bulgarian professional league for men's association football clubs. Standing at the top of the Bulgarian football league system, it serves as the country's primary football competition. The league determines the champion of Bulgaria and is contested by fourteen teams. It operates on a system of promotion and relegation with the second tier of the Bulgarian football league pyramid, the Second League. Known by its previous name A Group, the Bulgarian top-tier was fully restructured during the summer of 2016, when new licensing criteria were introduced.

The Bulgarian Cup is a Bulgarian annual football competition. It is the country's main cup competition and all officially registered Bulgarian football teams take part in it.

In June 2016 CSKA II took the place of Litex Lovech II in the Bulgarian Second League. The team was selected by CSKA and Litex youth players. After Stamen Belchev took charge of the first team CSKA II's results worsened, and the team was relegated to South-West Third League on the final day of the season following a 1–2 away defeat by Vitosha Bistritsa. [1] On 5 June 2017, the owners officially informed the Bulgarian Football Union that the team will not participate in the 2017–18 South-West Third League as the level was deemed too low for youth players' development. [2] On 6 June 2017, the contract of the head coach Svetoslav Todorov was terminated. [3] 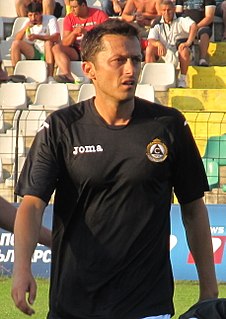 Kostadin Hazurov is a Bulgarian footballer who plays as a striker for Lokomotiv Sofia. 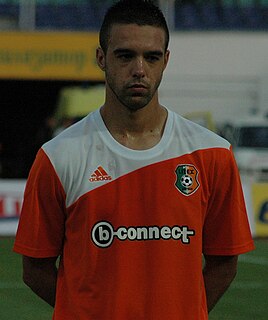 Alexandre Barthe is a French footballer who plays as a defender.

Nikolay Bodurov is a Bulgarian professional footballer who captains CSKA Sofia and plays for the Bulgarian national team. Bodurov plays mainly as a centre back but has also played as a right back on some occasions.

The 2010–11 A Group was the 87th season of the Bulgarian national top football division, and the 63rd of A Group as the top tier football league in the country. The season commenced on 31 July 2010 and ended with the last games on 28 May 2011. The winter break was between the weekends around 29 November 2010 and 26 February 2011. Litex Lovech had defended their 2009/10 A Group title and became champions for 2 years in a row.

Nikola Kolev is a Bulgarian footballer. He currently plays for Etar Veliko Tarnovo on loan from CSKA Sofia as a midfielder.

Kristiyan Malinov is a Bulgarian professional footballer who plays as a midfielder for CSKA Sofia and the Bulgarian national team.

Ludogorets II or Ludogorets 2 is a Bulgarian professional football team based in Razgrad. Founded in 2015, it is the reserve team of PFC Ludogorets Razgrad, and currently plays in B Group, the second level of Bulgarian football.

Football Club Central Sports Club of the Army 1948 Sofia, short FC CSKA 1948 Sofia is a Bulgarian football club from the city of Sofia. The team plays its home matches at the Vasil Levski Stadium and competes in Bulgaria's 2nd football division, the Second League, during the 2018/19 season. The colours of the club are red and white.

Tonislav Yordanov is a Bulgarian footballer who plays as a forward for CSKA Sofia.

The 2018−19 Bulgarian Cup is the 37th official edition of the Bulgarian annual football knockout tournament. The competition begins on 25 September 2018 with the first round and finishes with the final on 15 May 2019. Slavia Sofia are the defending champions. The winner of the tournament qualifies for the second qualifying round of the 2019–20 UEFA Europa League.