Septemvri (Bulgarian : Септември) is a Bulgarian professional association football club based in Sofia, who compete in the Second League, the second tier of Bulgarian football. Its home ground is the Septemvri Stadium, but due to its poor condition the team plays its home matches at the Bistritsa Stadium and 57th Public School's FIFA-certified football field.

The club's biggest success to date is the winning of the Bulgarian Cup in 1960 and finishing 5th in the Bulgarian first division during the same season. Septemvri is known for its strong youth academy, which over the years has developed numerous players for Bulgaria's elite clubs and the national team.

On November 5, 1944 the clubs Sportclub Sofia, Sokol and Vazrazhdane unite under the name of FC Septemvri Sofia. On March 26, 1945, the additional clubs of Botev (Konyovitsa), Ustrem (Zaharna fabrika), Pobeda (Krasna Polyana), and Svoboda (Tri kladentsi) merge into the club. In May 1948, the club, then playing in the 1st Sofia Division, is briefly merged with second-division CDV/Chavdar (Sofia) and the unified club wins the 1948 Bulgarian Championship by overcoming Levski Sofia in the final. [1]

Septemvri starts the 1948–49 season in the newly formed A Republican Football Group, but only six months later is separated from CDV (Chavdar) and removed from the division, with the current title given to CDNV, Chavdar's new name, which would ultimately become CSKA Sofia. At the end of the 1948–49 season, Septemvri is allowed to take part in a two-match play-off for entering first division against Marek Dupnitsa. After both matches end with a 2:0 win for each team, a third game is played in which Septemvri falls 1:0 and remains in second division.

From 1949 to 1969, Septemvri exists as an independent club, during which period it reaches the height of its success. In 1959, the club finishes first in the B PFG and is promoted to first division for the 1959–60 season. That same season, Septemvri finishes in 5th place and claims the Bulgarian Cup after a dramatic 4:3 win over Lokomotiv Sofia in extra time. The club's stay among the elite lasts only two years, as in 1961 it is relegated to the B PFG, where it remains until 1968.

In 1969, during another period of football reform in Bulgaria, Septemvri was again merged into CSKA Sofia. This unification continued for almost 20 years, until 1988, when the club became independent again and joined the V AFG. In 1993, Septemvri won a promotion to the B PFG. In 1998, the club became the champion of the B PFG and joined the elite for the first time since 1961. It finished in 16th place and was relegated again.

During the 2000–01 season, the club finished in 13th place in the B PFG and was relegated to the V AFG, where it remained until 2008. In March 2008, the club was heavily penalized after a scandalous match against FC Bansko, when coach Rumen Stoyanov ordered his players to leave the field, a serious offence according to Bulgarian Football Union regulations. [2] With an executive decision, the BFU removed Septemvri from the V AFG and placed it in the A OFG, the Sofia Regional Football Group. [3] Despite this setback, the club attained 1st place in the division in the 2008–09 season and qualified for a play-off match for entering the V AFG against FC Novi Iskar. [4] After an emotional 0–0 in regular time, penalty kicks were in order to determine the team going forward. Septemvri lost the penalty shootout 5–4. [5]

In 2015, Rumen Chandarov, owner of DIT Sport Academy, one of the best Bulgarian football academies in the last few years, announced that he is the new owner of Septemvri, with the goal of getting the young players to compete in the First Professional Football League of Bulgaria. The team merged with Conegliano German and started the 2015–16 season from V Group. Nikolay Mitov was appointed as a manager of the team. In the end of the 2015 it was decided that the team will give a bigger chance to their U19 players, so most of the players who joined in the season start left and only seven players left, but 18 players joined from the U19 team which was third in the Elite Youth Group by the end of 2015. Some media announced that Chandarov will stop financing the team also due to the fact that he started financing Botev Plovdiv, but Chandarov said that this is not true and the only reason to do this is to make youth players enter the men's football. [6]

On 24 June 2016, Pirin Razlog merged into PFC Septemvri Sofia. From the new season 2016–17 Septemvri will compete in the new Second League, the second division of Bulgarian football. [7] Septemvri returned and in the Bulgarian Cup and draw the Bulgarian First League team Beroe Stara Zagora. They won the match on 21 September 2016 with 2–0, goals scored by Georgi Stoichkov and Petar Tonchev. [8] The team finished their season in Second League in 2nd place two points behind the winners of the group — Etar and qualified for the Promotion playoffs against elite member Montana. [9] The team won the playoff on 3 June 2017 with 2–1 final result and returned to the top level after 19 years. [10]

On 8 June 2017, Dimitar Vasev was announced as the manager who would lead the team in their return to the First League with Hristo Arangelov, the caretaker manager after Nikolay Mitov, as his first assistant. [11] The team announced that they would play to Vasil Levski National Stadium until their Septemvri Stadium is built. [12] Later, the club owner Rumen Chandarov revealed that the team would play at Bistritsa Stadium after the stadium gained a First League licence, since he didn't want Septemvri to play in front of empty seats. [13] [14] Septemvri's first match was against Dunav Ruse on 17 July and the team lost the match 0–2. [15] Week later Septemvri won their second match against Pirin with Boris Galchev scoring the winning goal. [16] After four defeats in five games, Vasev was released and Nikolay Mitov returned in charge after his release from Levski Sofia. [17] Septemvri finished the half season in 10th place with 23 points after a 2–1 win over Cherno More. [18]

Septemvri secured their place in First League on 15 April 2018 after a 0–2 win over Dunav Ruse and qualified for European play-off quarter-finals.

Septemvri could not avoid relegation in the next season, however, as they were relegated after losing in the relegation playoffs to FC Arda Kardzhali , 0-1. This ended their two year stay in the Bulgarian elite. [20]

Back in the second tier after two seasons in the elite, Septemvri managed to maintain their good form and remained largely within the top three in the Second League, a strong candidate for promotion. The 2019-20 season was eventually not finished, due to the COVID-19 outbreak in Bulgaria. The last matches were played in early March. At that time, Septemvri was second in the league, three points behind CSKA 1948. This means that Septemvri will face the 13th placed team from the First League in a promotion playoff.

As of 1 August 2020Note: Flags indicate national team as defined under FIFA eligibility rules. Players may hold more than one non-FIFA nationality.

Had international caps for their respective countries, or held any club record. Players whose name is listed in bold represented their countries while playing for Septemvri.

Most appearances for the club in First League

Most goals for the club in First League

Etar is a Bulgarian sports football club based in Veliko Tarnovo, that plays in the Bulgarian First League, the top flight of Bulgarian football.

Daniel Georgiev is a Bulgarian footballer who plays as a right back or defensive midfielder for Chernomorets Balchik.

Hristo Arangelov is a Bulgarian former footballer, and assistant manager of Septemvri Sofia.

FC Chavdar is a Bulgarian football club based in Etropole, Sofia Province. Founded in 1922, they compete in the South-West Third League, the third tier of Bulgarian football. They play their home games at the Chavdar Stadium, which now boasts a capacity of 5,600. Their home colours are red and white.

Preslav Yordanov is a Bulgarian footballer who currently plays as a forward for Pirin Blagoevgrad. 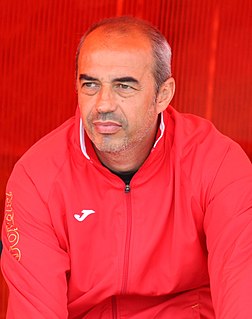 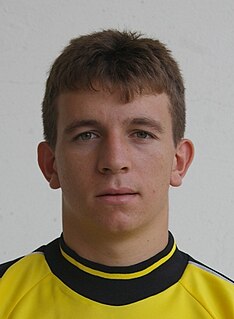 Yanko Georgiev is a Bulgarian football goalkeeper who currently plays for Botev Plovdiv.

The 2011–12 B Group was the 57th season of the Bulgarian B Football Group, the second tier of the Bulgarian football league system. The season started on 13 August 2011 and finished in June 2012 with the A Group promotion play-off.

The 2011–12 V AFG season is the 57th season of the Bulgarian V AFG, the third tier of the Bulgarian football league system. The winners of each of the four regional groups progress to the 2012–13 B PFG, and up to four teams from each group are relegated to regional amateur championships.

Nikolay Angelov Mitov is a Bulgarian former footballer and a manager of Hebar Pazardzhik.

Yanko Angelov is a Bulgarian professional footballer who plays as a midfielder for Montana.

The 2013–14 V Football Group season was the 64th season of the Bulgarian V Group. The group comprises the third level of the Bulgarian football pyramid and is divided into four geographic regions: North-West, North-East, South-East, and South-West.

Asen Chandarov is a Bulgarian professional footballer who plays as a midfielder for Romanian club Academica Clinceni.

Football Club Central Sports Club of the Army 1948 Sofia is a Bulgarian football club from the city of Sofia. The team plays its home matches at the Vasil Levski National Stadium and competes in Bulgaria's First League. The colours of the club are red and white.

The 2017–18 First Professional Football League was the 94th season of the top division of the Bulgarian football league system, the 69th since a league format was adopted for the national competition of A Group as a top tier of the pyramid and also the 2nd season of the First Professional Football League, which decides the Bulgarian champion. The season is the second with a new league structure and strict financial criteria where 14 clubs play each other home and away, until the league is split up in championship and relegation playoffs. The new league structure, inspired by the ones used by the Belgian First Division A and Danish Superliga, was approved by the Bulgarian Football Union on 6 June 2016. The fixture list was released on 22 June 2017.

The 2018–19 First Professional Football League was the 95th season of the top division of the Bulgarian football league system, the 70th since a league format was adopted for the national competition of A Group as a top tier of the pyramid and also the 3rd season of the First Professional Football League, which decides the Bulgarian champion. The season began on 20 July 2018 and finished on 30 May 2019. Ludogorets Razgrad became champions for the 8th consecutive time, on the final matchday of the season, with a 4–1 home win over Cherno More Varna.

The 2020–21 Second League is the 66th season of the Second League, the second tier of the Bulgarian football league system, and the 5th season under this name and current league structure. It was delayed by two weeks due to the COVID-19 situation in Bulgaria, which saw footballers from a number of the participating teams testing positive for COVID-19 in July 2020, with Minyor Pernik especially affected. The season began in August 2020.