POSSLQ ( /ˈpɒsəlkjuː/ POSS-əl-KYOO, plural POSSLQs) [1] [2] is an abbreviation (or acronym) for "Person of Opposite Sex Sharing Living Quarters", [3] a term coined in the late 1970s by the United States Census Bureau as part of an effort to more accurately gauge the prevalence of cohabitation in American households.[ citation needed ]

After the 1980 Census, the term gained currency in the wider culture for a time. [4]

After demographers observed the increasing frequency of cohabitation over the 1980s, the Census Bureau began directly asking respondents to their major surveys whether they were "unmarried partners", thus making obsolete the old method of counting cohabitors, which involved a series of assumptions about "Persons of Opposite Sex Sharing Living Quarters". The category "unmarried partner" first appeared in the 1990 Census, and was incorporated into the monthly Current Population Survey starting in 1995. By the late 1990s, the term POSSLQ had fallen out of general usage, and returned to being a specialized term for demographers. [5]

There's nothing that I wouldn't do If you would be my POSSLQ You live with me and I with you, And you will be my POSSLQ. I'll be your friend and so much more; That's what a POSSLQ is for. [6]

Elliot Sperber, the writer of The Hartford Courant 's weekly cryptogram, invented a cryptogram that (when solved) said:

Roses are Red, Violets are Blue, Won't you be my POSSLQ?[ citation needed ]

In a fifth-season episode of the television show Cheers , Frasier Crane and Lilith Sternin describe themselves as POSSLQs. [7]

Frasier is an American television sitcom that was broadcast on NBC for 11 seasons, premiering on September 16, 1993, and concluding on May 13, 2004. The program was created and produced by David Angell, Peter Casey, and David Lee in association with Grammnet (2004) and Paramount Network Television. 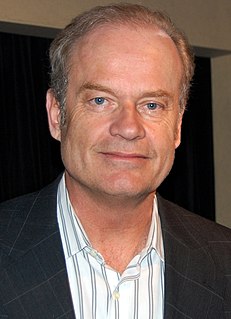 Allen Kelsey Grammer is an American actor, producer, director and writer, best known for his two-decade-long portrayal of psychiatrist Dr. Frasier Crane on the NBC sitcom Cheers and its spin-off Frasier, for which he won four Primetime Emmy Awards and two Golden Globe Awards. He is also known for his performance in the political drama series Boss for which he won a Golden Globe Award, and the period drama series The Last Tycoon, as well as having a guest role as the voice of Sideshow Bob in The Simpsons, with additional voice roles in Anastasia (1997) and Toy Story 2 (1999). He has also appeared in various television shows such as 30 Rock, Modern Family, and Unbreakable Kimmy Schmidt.

Cohabitation is an arrangement where two people are not married but live together. They are often involved in a romantic or sexually intimate relationship on a long-term or permanent basis. Such arrangements have become increasingly common in Western countries since the late 20th century, being led by changing social views, especially regarding marriage, gender roles and religion. 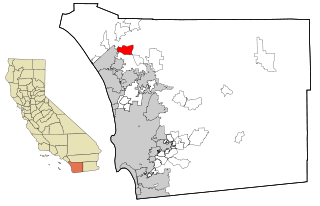 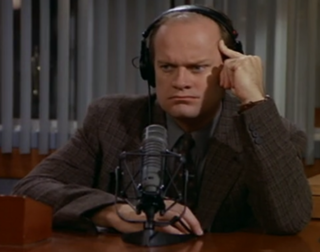 Dr. Frasier Winslow Crane is a fictional character on the American television sitcom Cheers and its spin-off Frasier, portrayed by Kelsey Grammer. The character debuted in the Cheers third-season premiere, "Rebound " (1984), as Diane Chambers's love interest, part of the Sam and Diane story arc. Intended to appear for only a few episodes, Grammer's performance for the role was praised by producers, prompting them to expand his role and to increase his prominence. Later in Cheers, Frasier marries Lilith Sternin and has a son, Frederick. After Cheers ended, the character moved to a spin-off series Frasier, the span of his overall television appearances totaling twenty years. In the spin-off, Frasier moves back to his birthplace Seattle after his divorce from Lilith, who retained custody of Frederick in Boston, and is reunited with a newly-created family: his estranged father Martin and brother Niles.

The United States census of 2000, conducted by the Census Bureau, determined the resident population of the United States on April 1, 2000, to be 281,421,906, an increase of 13.2 percent over the 248,709,873 people enumerated during the 1990 census. This was the twenty-second federal census and was at the time the largest civilly administered peacetime effort in the United States. 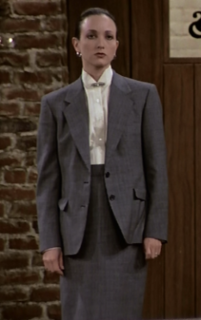 Lilith Sternin is a fictional character on the American television sitcoms Cheers and Frasier, portrayed by Bebe Neuwirth. The character first appears as a date for Frasier Crane, though mutual hostility and discomfort causes the evening to end badly. Several months later, Lilith meets Frasier again and, with some help from Frasier's ex-fiancée, Diane Chambers, they start a romantic relationship, eventually living together, marrying, and having a son, Frederick.

In legal definitions for interpersonal status, a single person refers to a person who is not in serious committed relationships, or is not part of a civil union. In common usage, the term 'single' is often used to refer to someone who is not involved in any type of serious romantic relationship, including long-term dating, engagement, marriage, or someone who is 'single by choice'. Single people may participate in dating and other activities to find a long-term partner or spouse.

Woodrow Tiberius Boyd is a character on the American television show Cheers, portrayed by Woody Harrelson. Woody came to Cheers at the beginning of the fourth season of Cheers in 1985 in the episode "Birth, Death, Love and Rice".

A girlfriend is a female friend or acquaintance, often a regular female companion with whom one is platonically, romantically or sexually involved.

Seacliff is an unincorporated community in Santa Cruz County, California, United States that includes Seacliff State Beach. It is identified as one of several small communities with a combined population of 24,402 forming the unincorporated town of Aptos by the local Chamber of Commerce along with:

Cohabitation in the United States is loosely defined as two or more people, in an intimate relationship, who live together and share a common domestic life but are neither joined by marriage nor a civil union. 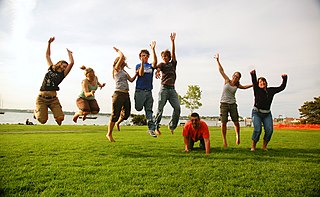 The traditional family structure in the United States is considered a family support system involving two married individuals — one man and one woman — providing care and stability for their biological offspring. However, this two-parent, heterosexual, nuclear family has become less prevalent, and nontraditional family forms have become more common. The family is created at birth and establishes ties across generations. Those generations, the extended family of aunts and uncles, grandparents, and cousins, can hold significant emotional and economic roles for the nuclear family.

A family is defined by the United States Census Bureau for statistical purposes as "a group of two people or more related by birth, marriage, or adoption and residing together; all such people are considered as members of one family."

"The Show Where Sam Shows Up" is the 16th episode of the second season of the American sitcom Frasier. This episode originally aired on Tuesday, February 21, 1995, on NBC, intended as part of a February ratings sweep by the network. It features a special guest appearance of Ted Danson as Sam Malone, a recovering sex addict, bartender and ex-baseball player. In this episode Sam arrives in Seattle to see his old friend Frasier, and then is introduced to Frasier's family at a dinner in Frasier's home, where the inconsistencies about Martin's supposed "death" are cleared up. While visiting Seattle, Sam ends his relationship with a woman named Sheila after discovering her dalliance with other men. Danson's appearance in this episode has received mixed reviews, and the positive highlight about it is his interaction with the cast of Frasier.

The third season of Cheers, an American television sitcom, originally aired on NBC in the United States between September 27, 1984, and May 9, 1985. The show was created by director James Burrows and writers Glen and Les Charles under production team Charles Burrows Charles Productions in association with Paramount Television. The third season is available on DVD in a four-disc set.