Last updated April 27, 2021
This article is about the football club formed in 2005. For the original club from Burgas which existed from 1919 until 2006, see FC Chernomorets Burgas.
Not to be confused with FC Chernomorets 1919 Burgas.

The club was founded in 2005, following the folding of FC Chernomorets Burgas, that played numerous seasons in the first tier of Bulgarian football. The new Chernomorets quickly ascended to the first tier and remained there until the 2013-14 season. Financial problems followed, which led to instability and relegations to lower leagues, ultimately to the fifth tier, where the team played last in 2018-19, before being dissolved. Fans from Burgas founded FC Chernomorets 1919 Burgas as the successor of the club.

In the summer of 2005, the club was founded by the mayor of Burgas. Despite the protests of the owner of FC Chernomorets Ivaylo Drazhev, the new club was named OFC Chernomorets 919 and was named as a successor of the current then FC Chernomorets. At the same time, Drazhev formed another club in the capital Sofia under the name PFC Chernomorets Burgas Sofia which only lasted one season and reached many anti-records.

After a one-season stay in the amateur division, the club easily won the Bulgarian South-East V AFG with Dian Petkov as a head coach, finishing in the 1st place. In June, 2006, OFC Chernomorets 919 won the Bulgarian Amateur Cup. In the final at the Vasil Levski National Stadium, Chernomorets won with 4–0 against FC Benkovski Kostinbrod.

The same summer, Mitko Sabev, a famous Bulgarian oil magnate and owner of the rival football club in the city Naftex Burgas, bought the club from the municipality and renamed it to PSFC Chernomorets Burgas. (the club is registered in the Bulgarian Football Union as PFC Chernomorets Burgas and is known by that name to the people.) The football club was used as a reserve team for Naftex Burgas. And the owner appointed for manager the famous Bulgarian manager Dimitar Dimitrov.

In 2007, the Sharks won the East B PFG and were promoted to the A PFG. The next season Chernomorets finished 6th and qualified for the Intertoto Cup. In the second round, the Sharks defeated ND Gorica from Slovenia with 3–1 on aggregate to set up a third round clash with Swiss Grasshopper Zurich, but were eliminated with a 0–4 on aggregate.

In December, 2008, Chernomorets's owner appointed for manager of the football club the notable Bulgarian player Krassimir Balakov, after being sacked from FC St. Gallen. [2] [3] At the end of that season, Mitko Sabev dissolved Naftex Burgas and bought PFC Chernomorets Pomorie from Pomorie, making the new club from the nearby town a reserve team for the main football club.

On January 14, 2010, Chernomorets Burgas was named as the most progressive club in 2009 in Bulgaria. [4] In July 2010, after differences between the owners of Petrol AD the club's budget was severely reduced and many employees from the staff were released. However, on 6 December 2010, Krassimir Balakov was released from Chernomorets Burgas after mutual consent. Second half of the 2010-11 A PFG season was a nightmare for Chernomorets Burgas and the team collapsed to eighth place in the standings while being managed by two more coaches - Anton Velkov and Georgi Vasilev.

On 30 May 2011, Mitko Sabev appointed as manager for the second time Dimitar Dimitrov – Hero. He founded high quality players for free like Jugurtha Hamroun, Lourival Assis, Aatif Chahechouche, and Yannick Boli, with Chernomorets Burgas having his best season in club history in the Bulgarian A PFG  – a 4th place with real chances to reach the Europa League until the end. However, little was not enough and the club eventually didn't qualify.

The huge come-down: From A Group to B Regional in 5 years and extinction

After 2013/2014 season Chernomorets Burgas was relegated after 7 years in the A PFG. In the next season, they were unable to bounce back and lost their professional status after suffering another relegation - to the V group. The team was relegated again in A Regional Group and again finished on the last place, but was administratively saved from relegate, even finishing on negative points. The next season was nevertheless better and the team finished was relegated to the B RFG after a last-place finish, marking 4 relegations in a row and moving from the top football level to the lowest. They finished the 2018-19 season in the B Regional League in 7th place and on 5 July 2019 the team declared bankruptcy, which was followed by the team dissolving. [5]

Chernomorets plays its home games at the Lazur Stadium. Lazur Stadium is a multi-use stadium in Burgas, Bulgaria. It is currently used mostly for football matches. The stadium holds 18,037 people and it is 3 star rated by UEFA. The stadium was opened in 1967 and was renovated in 1997 and 2009.

Chernomorets Arena [6] is a future modern stadium in Burgas, which is going to be the new home ground of Chernomorets Burgas. The new venue will be built in the place of the old home ground of FC Chernomorets, the Chernomorets Stadium, and will have a capacity of 30,000 spectators and a possible expansion to 55,000. It is scheduled to be opened in 2017. The construction will start in the summer of 2013, because of the current demolishing process of the old stadium and the global financial crisis, and will cost 500 million euros, making it one of the most expensive stadiums in Europe. The stadium will be probably rated with an elite ranking by UEFA and will host Champions League and Europa League matches in Burgas and Eastern Bulgaria. 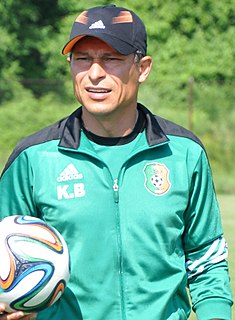 Krasimir Genchev Balakov is a Bulgarian professional football manager and former player who is the head coach of Bulgarian club CSKA 1948. A former attacking midfielder, he was a key member of the Bulgarian national team that finished fourth in the 1994 FIFA World Cup. He is considered as second only to Hristo Stoichkov among Bulgarian footballers of his generation.

FC Marek is a Bulgarian football club based in Dupnitsa, currently playing in the Third League. It was founded in 1947 following the unification of four local clubs. Home matches take place at Bonchuk Stadium, where Marek famously defeated Bayern Munich in 1977. Bonchuk stadium has a capacity of 16,000. The team last played top-flight football during the 2014–15 season, after which it has played in the third tier.

PFC Slavia Sofia is a Bulgarian professional association football club based in Sofia, which currently competes in the top tier of the Bulgarian football league system, the First League. Slavia's home ground is the Slavia Stadium in Ovcha kupel with a capacity of 25,556. The team's colours are white and black. Established on 10 April 1913, Slavia is currently the oldest sports club in Sofia.

For the new club claimed as the successor, see PFC Neftochimic Burgas.

efbet Arena is a multi-purpose stadium in Burgas, Bulgaria. It is currently used for football matches and is the home ground of Neftochimic 1962 Burgas. The stadium holds 18,037 people and carries a 3-star rating by UEFA. It was opened in 1967 and was renovated between 1990 and 1997. Officially opened after renovation at 13 April 1997 with the match Neftochimik - Levski Sofia 4:1. Until 2002 the stadium was named "Neftochimic" and later "Naftex".

FC Yantra is a Bulgarian football club based in Gabrovo, which plays in Second League, the second tier of Bulgarian football. The club was originally founded in 1919 and home matches are played at Stadion Hristo Botev. Its home stadium has a capacity of 14 000 seats. Club colors are green and white. 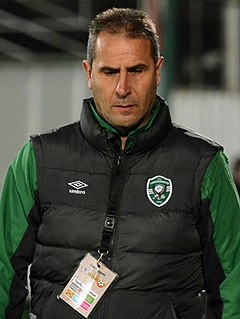 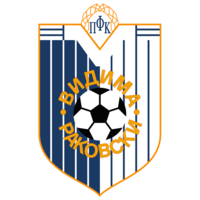 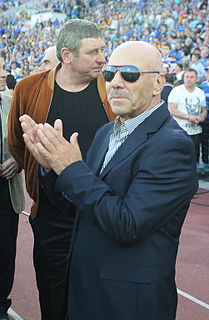 Georgi Vasilev Ivanov, nicknamed Gocheto and The General, is a former Bulgarian footballer who played as a midfielder, and a current football manager. 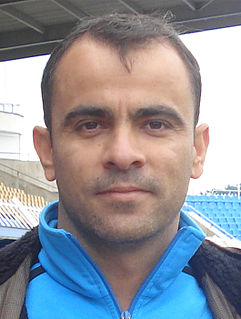 Chernomorets Arena is a planned future modern sports venue in Burgas, Bulgaria. The stadium will be built in the place of the old Chernomorets Stadium and will have an exact capacity of 30,000 spectators and a possible expansion to 55,000. It is scheduled to be opened in 2017 and it will be the new home ground of the local PFC Chernomorets Burgas. The construction will start in 2013, because of the global financial crisis, and will cost 500 million euros, making it one of the most expensive stadiums in Europe. The stadium will be part of a modern complex with a mall, underground parking area, indoor sports hall with a capacity of 3,500 spectators, three business towers and a five-star luxury hotel. The whole complex will cost 1 billion euros, according by the owner of Chernomorets and Petrol Holding AD Mitko Sabev. 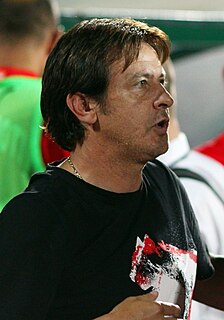 Pomorie is a Bulgarian municipal association football club based in Pomorie, that competes in the Second League, the second tier of Bulgarian football. The club plays its home matches at the Pomorie Stadium, which has an overall capacity of 2,000 seats. 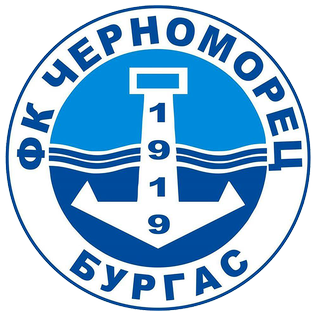 FC Chernomorets 1919 is a Bulgarian football club from the city of Burgas, which currently competes in Bulgaria's 3rd football league, the Third League. Chernomorets plays its home matches at the local Stadion Chernomorets. 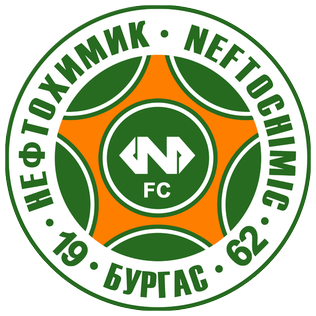 Neftochimic is a Bulgarian professional association football club based in Burgas, which currently competes in Second League, the second tier of the Bulgarian football league system. The team plays its home games at the local Lazur Stadium, which it used to share with PSFC Chernomorets Burgas up until 2015.