Zorka Janů, was a Czech film actress and the younger sister of actress Lída Baarová. 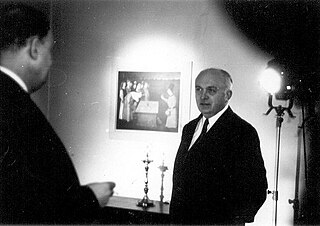 Otakar Vávra was a Czech film director, screenwriter and pedagogue. He was born in Hradec Králové, Austria-Hungary, now part of the Czech Republic.

Journey into the Depth of the Student's Soul is a Czech comedy film directed by Martin Frič. It was released in 1939.

A Charming Man is a Czech comedy film directed by Martin Frič. It was released in 1941.

Four Murders Are Enough, Darling is a 1971 Czechoslovak comedy film directed by Oldřich Lipský. It is an adaptation of the 1960 novel Entry Forbidden to The Dead by Croatian writer and comic artist Nenad Brixy, which was previously adapted into a Yugoslav film of the same name in 1965.

Gustav Hilmar, real name Gustav Černý was a Czech film actor. He appeared in 46 films between 1927 and 1964.

Otomar Korbelář was a Czechoslovak film actor. He appeared in over 40 films between 1931 and 1976.

Jaroslav Průcha was a Czechoslovakian film actor. He appeared in more than 50 films between 1929 and 1963. He is buried at the Vyšehrad Cemetery.

Svatopluk Beneš was a Czechoslovak film actor. He appeared in 90 films and television shows between 1934 and 2003.

Kříž is a Czech surname, meaning "cross". It may refer to:

U nás v Kocourkově is a 1934 Czechoslovak drama film, directed by Miroslav Cikán. It stars Jan Werich, Jindřich Plachta, and Václav Trégl. It was one of several films the director made with Werich, and features him as a convict. The film is largely set in a prison.

Jaroslav Kříž is a Czech judoka. He competed in the men's half-lightweight event at the 1980 Summer Olympics.