Last updated October 01, 2020
Malaysian footballer
In this Indian name, the name Padathan is a patronymic, not a family name, and the person should be referred to by the given name, Gunalan.

Gunalan a/l Padathan (born 11 September 1981) is a Malaysian footballer who plays as a defender for PKNS in the Super League Malaysia. [1] [2]

Football Association of Selangor, commonly referred to as FA Selangor is a Malaysian professional football club based in the city of Shah Alam and competes in the Malaysia Super League, the top division of Malaysian football. Founded in 1936 as Football Association of Selangor (FAS) the association built its football development by forming the professional football team and known as FA Selangor. It currently plays their home games in the 80,372-capacity Shah Alam Stadium. 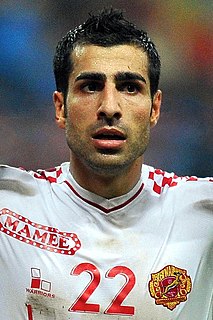 Mohammed Mahmoud Ghaddar is a Lebanese professional footballer who plays as a forward for Lebanese Premier League club Nejmeh.

Mohd. Amri bin Yahyah is a Malaysian professional footballer who last played for Sarawak United. He also represents the Malaysia national team. Amri plays mainly as a forward but can also play as an attacking midfielder or as a winger. Regards by many as one of the greatest player of his generation and in asia.

Irfan Bakti Abu Salim is a Malaysian football coach. A former football player, he was in the Malaysia squad for the 1976 AFC Asian Cup in Tehran, Iran.

Zairul Fitree Bin Ishak is a Malaysian professional footballer who plays as a left back. He is able to perform accurate cross from the left field and prefers to use his left foot which can score goals through dead ball situations.

The 2012 Liga Super also known as the Astro Liga Super for sponsorship reasons is the ninth season of the Liga Super, the top-tier professional football league in Malaysia.

The 2013 Liga Super also known as the Astro Liga Super for sponsorship reasons is the 10th season of the Liga Super, the top-tier professional football league in Malaysia.

Kelantan Football Association, also known as The Red Warriors, is a professional association football club based in Kota Bharu, in the Malaysian state of Kelantan. The football team has played in the second tier of Malaysian football, Malaysia Premier League since 2019. Founded in 1946, they have a long-standing rivalry with Terengganu, the two east coast teams involved in what is known as the East Coast Derby. Their home is the 22,000-seat Sultan Muhammad IV Stadium. Kelantan's regular kit colours are red shirt and shorts with a white pattern on the side.

Pahang Football Club is a Malaysian professional football club based in Kuantan, Pahang. The association was found in 1959 to represent the state itself and has traditionally worn a yellow home kit since. In the beginning, their early home matches were held around the city public fields and outside Kuantan, predominantly around districts of Pahang.

The 2016 Malaysia FA Cup was the 27th season of the Malaysia FA Cup, a knockout competition for Malaysia's state football association and clubs. It was sponsored by Kopi Superbest Power, and was known as the Superbest Power Piala FA due to sponsorship purposes. LionsXII were the defending champions after beating Kelantan 3–1 in the previous season, but did not compete in this edition.