The paiban (Chinese : 拍板 ; pinyin :pāibǎn) is a clapper made from several flat pieces of hardwood or bamboo (or, formerly, sometimes also ivory or metal), which is used in many different forms of Chinese music. There are many different types of paiban, and the instrument is also referred to as bǎn (板), tánbǎn (檀板, literally "sandalwood clapper"), mùbǎn (木板, literally "wooden clapper"), or shūbǎn (书板). Typical materials used for the paiban include zitan (紫檀, rosewood or red sandalwood), hongmu (红木), or hualimu (花梨木, rosewood), or bamboo, with the slats tied together loosely on one end with cord. It is held vertically by one hand and clapped together, producing a sharp clacking sound.

When used together with a small drum (both played together by a single player, the paiban held in one hand and the drum played with a stick held in the other) the two instruments are referred to collectively as guban (鼓板). Somewhat confusingly, the clapper is sometimes also referred to, without the drum, as guban.

When used as part of a guban, the paiban is used in several genres of shuochang (Chinese story-singing), as well as in Beijing opera, kunqu , and Yue opera. It is also used in instrumental music, such as Jiangnan sizhu Chaozhou xianshi , Sunan chuida (苏南吹打), nanguan , shifan luogu (十番锣鼓), and Shanxi batao (山西八套).

The liuqin is a three, four or five -stringed Chinese mandolin with a pear-shaped body. The range of its voice is much higher than the pipa, and it has its own special place in Chinese music, whether in orchestral music or in solo pieces. This has been the result of a modernization in its usage in recent years, leading to a gradual elevation in status of the liuqin from an accompaniment instrument in folk Chinese opera, to an instrument well-appreciated for its unique tonal and acoustic qualities. The position of the instrument is lower than the pipa, being held diagonally like the Chinese ruan and yueqin. Like the ruan and unlike the pipa its strings are elevated by a bridge and the soundboard has two prominent soundholes. Finally, the instrument is played with a pick with similar technique to both ruan and yueqin, whereas the pipa is played with the fingers. Therefore, the liuqin is most commonly played and doubled by those with ruan and yueqin experience.

The fish drum is a Chinese percussion instrument. The name actually designates two rather different instruments, a membranophone and an idiophone. 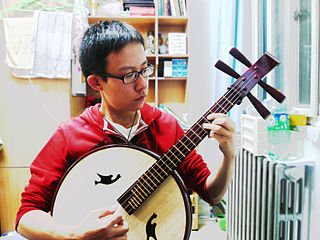 The zhongruan, is a Chinese plucked string instrument. The zhongruan has a straight neck with 24 frets on the fingerboard and 4 strings. It is usually played with a plectrum. It can also be played with fingers, which is similar to the way of playing the pipa (琵琶). The zhongruan is a tenor-ranged instrument in the family of ruan (阮). In ancient China, the ruan was called Qin pipa or Ruan xian (阮咸). Now the ruan has expanded to different sizes and the zhongruan is the "medium" one.

The buk (Korean: 북) is a traditional Korean drum. While the term buk is a native Korean word used as a generic term meaning "drum", it is most often used to refer to a shallow barrel-shaped drum, with a round wooden body that is covered on both ends with animal skin. Buk are categorized as hyeokbu which are instruments made with leather, and has been used for jeongak and folk music.

The erxian is a Chinese bowed string instrument in the huqin family of instruments. It has two strings and is used primarily in Cantonese music, most often in "hard string" chamber ensembles. In the 1920s, following the development of the gaohu, the erxian experienced a decline and since the late 20th century has been little used outside the tradition of Cantonese opera. 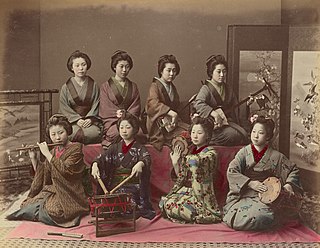 The tiqin is a name applied to several two-stringed Chinese bowed string musical instruments in the huqin family of instruments.

The term guban refers collectively to a small drum and paiban (clapper), which are played simultaneously, by a single player, in traditional Chinese music.

Jiangnan sizhu is a style of traditional Chinese instrumental music from the Jiangnan region of China.

Traditional Japanese music is the folk or traditional music of Japan. Japan's Ministry of Education classifies hōgaku as a category separate from other traditional forms of music, such as gagaku or shōmyō, but most ethnomusicologists view hōgaku, in a broad sense, as the form from which the others were derived. Outside of ethnomusicology, however, hōgaku usually refers to Japanese music from around the 17th to the mid-19th century. Within this framework, there are three types of traditional music in Japan: theatrical, court music, and instrumental.

Quyi and shuochang yishu are umbrella terms for over 300 regional genres of traditional Chinese oral performing arts. Quyi is distinguished from xiqu by its emphasis on narration, as opposed to acting, although they share many elements including the same traditional stories. Quyi artists generally wear no to little makeup. Musical instruments like drums, wooden clappers, pipa, yangqin, or sanxian are commonly seen in quyi, as are hand fans.

A clapper is a basic form of percussion instrument. It consists of two long solid pieces that are struck together producing sound. A straightforward instrument to produce and play, they exist in many forms in many different cultures around the world. Clappers can take a number of forms and be made of a wide variety of material. Wood is most common, but metal and ivory have also been used. The plastic thundersticks that have recently come to be popular at sporting events can be considered a form of inflated plastic clapper.

The Korean barrel drum is a shallow, barrel-shaped drum used in several types of Korean music, one of the many traditional Korean drums. This variety of drum has a round wooden body that is covered on both ends with animal skin. They are categorized as hyekbu which are instruments made with leather, and has been used for jeongak and folk music.

Teochew string music or Chaozhou xianshi is classed as a type of sizhu music although it typically uses stringed instruments only. It is found in northeastern Guangdong and parts of Fujian and also in regions with overseas Teochew populations, such as Malaysia, Singapore, Thailand, and the United States. The Chaoshan region of Guangdong, bordering on Fujian and comprising the cities of Chaozhou, Shantou and Jieyang, forms its own cultural sphere. Teahouses often accompany with Chaozhou music. 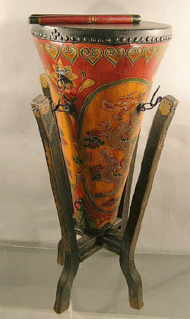 The bangu, often simply gu, is a Chinese frame drum that, when struck by one or two small bamboo sticks, creates a sharp dry sound essential to the aesthetics of Chinese opera. Striking the drum in different places produces different sounds. It is also used in many Chinese chamber music ensembles. The percussion section is very important in Chinese Opera, with battle or 'martial' scenes, which are called wu-chang. The bangu player is the director or conductor of the orchestra. He works with the other members of the percussion section to create the right mood for the audience and actors on stage.

The Tomb of Wang Chuzhi is the grave of Wang Chuzhi, a senior military governor of the late period of the Tang dynasty and the Later Liang from the time of the Five Dynasties. It was rediscovered in 1980 in Xiyanchuan village in Quyang district of the Chinese province of Hebei.