The Paleoproterozoic Era ( /pælioʊˌproʊtərəˈzoʊɪk-/ ; [1] [2] , also spelled Palaeoproterozoic), spanning the time period from 2,500 to 1,600 million years ago (2.5–1.6  Ga), is the first of the three sub-divisions (eras) of the Proterozoic Eon. The Paleoproterozoic is also the longest era of the Earth's geological history. It was during this era that the continents first stabilized.

Paleontological evidence suggests that the Earth's rotational rate during this era resulted in 20-hour days ~1.8 billion years ago, implying a total of ~450 days per year. [3]

Before the enormous increase in atmospheric oxygen, almost all existing lifeforms were anaerobic organisms, i.e., their metabolism was based upon a form of cellular respiration that did not require oxygen. Free oxygen in large amounts is toxic to most anaerobic organisms. Consequently, the majority of the anaerobic lifeforms on Earth died when the atmospheric free-oxygen levels soared in an extinction event called the Great Oxidation Event. The only lifeforms that survived were either those resistant to the oxidizing and poisonous effects of oxygen, or those sequestered in oxygen-free environments. The sudden increase of atmospheric free oxygen and the ensuing extinction of the vulnerable lifeforms is widely considered to be the one of the first and most significant mass extinctions in the history of the Earth. [4]

Many crown node eukaryotes (from which the modern-day eukaryotic lineages would have arisen)—or the divergences that imply them between various groups of eukaryotes—have been ostensibly dated to around the time of the Paleoproterozoic era. [5] [6] While there is some debate as to the exact period at which Eukaryotes evolved, [7] [8] current understanding places it somewhere in this period. [9] [10]

During this era, the earliest global-scale continent-continent collision belts developed.

These continental collision belts are interpreted as having resulted from one or more 2.0–1.8 Ga global-scale collision events that then led to the assembly of a Proterozoic supercontinent named Columbia or Nuna. [11] [12]

Felsic volcanism in what is now northern Sweden led to the formation of the Kiruna and Arvidsjaur porphyries. [13]

The Proterozoic is a geological eon spanning the time from the appearance of oxygen in Earth's atmosphere to just before the proliferation of complex life on the Earth. The name Proterozoic combines the two forms of ultimately Greek origin: protero- meaning "former, earlier", and -zoic, a suffix related to zoe "life". The Proterozoic Eon extended from 2500 mya to 541 mya, and is the most recent part of the Precambrian "supereon." The Proterozoic is the longest eon of the Earth's geologic time scale and it is subdivided into three geologic eras : the Paleoproterozoic, Mesoproterozoic, and Neoproterozoic. 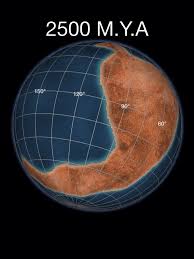 Kenorland was one of the earliest known supercontinents on Earth. It is thought to have formed during the Neoarchaean Era c. 2.72 billion years ago (2.78Ga) by the accretion of Neoarchaean cratons and the formation of new continental crust. It comprised what later became Laurentia, Baltica, Western Australia and Kalaharia. It also formed a substantial part of Nena, the supercontinent associated with the Sudbury Basin Impact.

Columbia, also known as Nuna and Hudsonland, was one of Earth's ancient supercontinents. It was first proposed by Rogers & Santosh 2002 and is thought to have existed approximately 2,500 to 1,500 million years ago in the Paleoproterozoic Era. Zhao et al. 2002 proposed that the assembly of the supercontinent Columbia was completed by global-scale collisional events during 2.1–1.8 Ga.

Arctica or Arctida was an ancient continent which formed approximately 2.565 billion years ago in the Neoarchean era. It was made of Archaean cratons, including the Siberian Craton, with its Anabar/Aldan shields in Siberia, and the Slave, Wyoming, Superior, and North Atlantic cratons in North America. Arctica was named by Rogers 1996 because the Arctic Ocean formed by the separation of the North American and Siberian cratons. Russian geologists writing in English call the continent "Arctida" since it was given that name in 1987, alternatively the Hyperborean craton, in reference to the hyperboreans in Greek mythology. 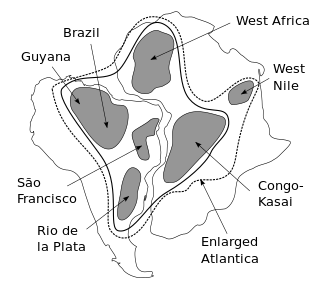 Atlantica is an ancient continent that formed during the Proterozoic about 2,000 million years ago from various 2 Ga cratons located in what is now West Africa and eastern South America. The name, introduced by Rogers 1996, was chosen because the continent opened up to form the South Atlantic Ocean. 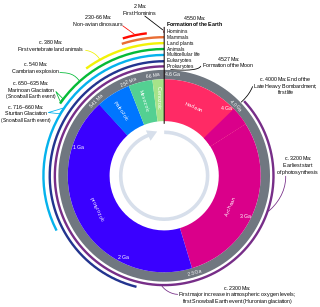 The history of Earth concerns the development of planet Earth from its formation to the present day. Nearly all branches of natural science have contributed to understanding of the main events of Earth's past, characterized by constant geological change and biological evolution.

The supercontinent cycle is the quasi-periodic aggregation and dispersal of Earth's continental crust. There are varying opinions as to whether the amount of continental crust is increasing, decreasing, or staying about the same, but it is agreed that the Earth's crust is constantly being reconfigured. One complete supercontinent cycle is said to take 300 to 500 million years. Continental collision makes fewer and larger continents while rifting makes more and smaller continents.

The Great Oxidation Event (GOE), sometimes also called the Great Oxygenation Event, Oxygen Catastrophe, Oxygen Crisis, Oxygen Holocaust, or Oxygen Revolution, was a time period when the Earth's atmosphere and the shallow ocean experienced a rise in oxygen, approximately 2.4 billion years ago (2.4 Ga) to 2.1–2.0 Ga during the Paleoproterozoic era. Geological, isotopic, and chemical evidence suggests that biologically induced molecular oxygen (dioxygen, O2) started to accumulate in Earth's atmosphere and changed Earth's atmosphere from a weakly reducing atmosphere to an oxidizing atmosphere, causing almost all life on Earth to go extinct. The causes of the event remain unclear.

Vaalbara was an Archean supercontinent consisting of the Kaapvaal Craton and the Pilbara Craton. E. S. Cheney derived the name from the last four letters of each craton's name. The two cratons consist of crust dating from 2.7 to 3.6 Gya, which would make Vaalbara one of Earth's earliest supercontinents.

The Kaapvaal Craton, along with the Pilbara Craton of Western Australia, are the only remaining areas of pristine 3.6–2.5 Ga crust on Earth. Similarities of rock records from both these cratons, especially of the overlying late Archean sequences, suggest that they were once part of the Vaalbara supercontinent.

The Trans-Hudson orogeny or Trans-Hudsonian orogeny was the major mountain building event (orogeny) that formed the Precambrian Canadian Shield, the North American Craton, and the forging of the initial North American continent. It gave rise to the Trans-Hudson orogen (THO), or Trans-Hudson Orogen Transect (THOT), which is the largest Paleoproterozoic orogenic belt in the world. It consists of a network of belts that were formed by Proterozoic crustal accretion and the collision of pre-existing Archean continents. The event occurred 2.0-1.8 billion years ago. 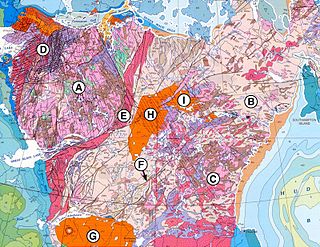 The Boring Billion, otherwise referred to as the Barren Billion, the Dullest Time in Earth's History, and Earth’s Middle Ages, is the time period between 1.8 and 0.8 billion years ago (Gya) spanning the middle Proterozoic eon, characterized by more or less tectonic stability, climatic stasis, and stalled evolution. It is bordered by two different oxygenation and glacial events, but the Boring Billion itself had very low oxygen levels and no evidence of glaciation. The oceans may have been oxygen- and nutrient-poor and sulfidic (euxinia), populated by mainly anoxygenic cyanobacteria, a type of photosynthetic bacteria which uses hydrogen sulfide (H2S) instead of water and produces sulfur instead of oxygen. This is known as a Canfield ocean. Such composition may have caused the oceans to be black- or milky-turquoise instead of blue.

The Wopmay orogen is a Paleoproterozoic orogenic belt in northern Canada which formed during the collision between the Hottah terrane, a continental magmatic arc, and the Archean Slave Craton at about 1.88 Ga. The collision lead to the short-lived Calderian orogeny. The formation was named for Wilfrid Reid "Wop" May, OBE, DFC, a Canadian flying ace in the First World War and a leading post-war aviator. 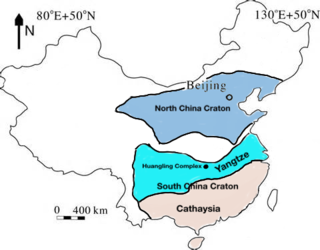 Huangling Complex represents a group of rock units appear in the middle of Yangtze Block in South China, distributed across Yixingshan, Zigui, Huangling and Yichang counties. The group of rock involves nonconformity that sedimentary rocks overlie the metamorphic basement. It is a 73-km long, asymmetrical dome-shaped anticline with axial plane orientating in north-south direction. It has a steeper west flank and a gentler east flank. Basically, there are three tectonic units from the anticline core to the rim, including Archean to Paleoproterozoic metamorphic basement, Neoproterozoic to Jurassic sedimentary rocks and Cretaceous fluvial deposit sedimentary cover. The northern part of the core is mainly tonalite-trondhjemite-gneiss (TTG) and Cretaceous sedimentary rock, it is called the Archean Kongling Complex. The middle of the core is mainly the Neoproterozoic granitoid. The southern part of the core is the Neoproterozoic potassium granite. Two basins are situated on the western and eastern flanks of the core respectively, including the Zigui basin and Dangyang basin. Both basins are synforms while Zigui basin has a larger extent of folding. Yuanan Graben and Jingmen Graben are found within Dangyang Basin area. Huangling Complex is an important area that helps unravel the tectonic history of South China Craton because it has well-exposed layers of rock units from Archean basement rock to Cretaceous sedimentary rock cover due to the erosion of the anticline.