Last updated August 18, 2020
This article is about the district of Nepal. For for the one in Peru, see Palpa District, Peru.
District in Province No. 5, Nepal

Palpa District is not far from Pokhara and easily reached by bus. The ancient hill town of Tansen in this district offers a more tranquil atmosphere where laid back lifestyle is infectious. Walk down the cobbled streets in the old bazaar to discover a way of life. Explore the Shreenagar Hills or do a day hike to the Rani Mahal, once a vibrant palace on the banks of the Kali Gandaki River. Palpa was the seat of the Sen kingdom that ruled over this region from 16th century for almost 300 years so Headquarter of Palpa is called "Tansen" (Nepali: तानसेन)

People have a saying that it looks similar to Nepal in term of its geographical borders.

The Bagmati River runs through the Kathmandu Valley of Nepal and separates Kathmandu from Patan flowing through the Province No. 2 of Southern Nepal that finally drains into the Indian State of Bihar . It is considered holy by both Hindus and Buddhists. A number of Hindu temples are located on its banks.

Arghakhanchi is one of the districts of Province No. 5 in Nepal. The district headquarter is Sandhikharka. The district covers an area of 1,193 km2 (461 sq mi) and has a population (2011) of 197,632. Its neighboring districts are Palpa in the east, Gulmi in the north, Kapilvastu District in the south and Pyuthan in the west. 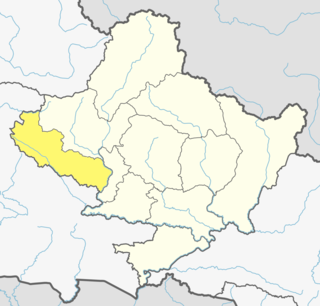 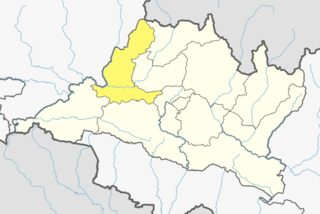 Gorkha District, a part of Gandaki Pradesh, is one of the seventy-Seven districts of Nepal and connected historically with the creation of the modern Nepal and the name of the legendary Gurkha soldiers. The district, with Gorkha Municipality as its district headquarters, covers an area of 3,610 km2 (1,390 sq mi) and has a population of 271,061 according to the 2011 Census of Nepal. It is the location of the Manakamana Temple. Also, the temples of great sage Gorakh Nath and goddess Gorakh Kali temple is located in district, after which the district got its name. Four major rivers run within and along it - the Chepe, Daraudi, Marsyangdi, and Budhi Gandaki. 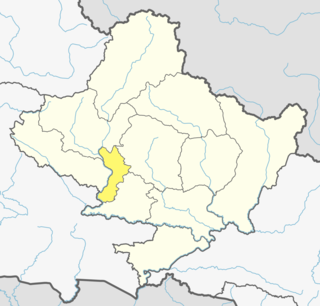 Parbat District (Nepali: पर्वत जिल्लाListen , is a hilly area of Nepal. It is a part of Gandaki Pradesh and one of the seventy-seven districts of Nepal, a landlocked country of South Asia. The district, with Kusma as its district headquarters, covers an area of 494 km2 and has a population of 157,826. It is the fourth smallest district of Nepal with 47 VDCs currently. It is mainly famous for the Gupteshwar Cave, which is visited by thousands of pilgrims during Shivaratri. Patheshwari Temple is the most famous temple of Kushma located at Katuwa Chaupari of Kushma-09. Patheshwori Mandir has many sub-temples inside like Ram Janaki Mandir, Bhagwati, Devi, Hanuman, and others. Alapeshwar cave is a famous cave in this district. It is also noted for the Dahere Deurali Temple, which is visited by thousands of pilgrims during Balachaturdanshai. Kamadhenu Mandir is another famous temple of Parbat district which is located in Khurkot development committee. Recently the Modi hydro project of 10 M.W. has been constructed in this district. Parbat's biggest playground lies in Phalewas village named Majhi Chour and Indra Chour. 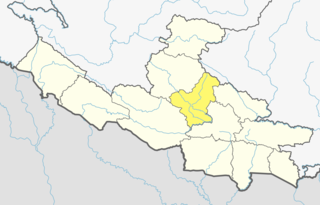 Rupandehi District, a part of Province No. 5, is one of the seventy-seven districts of Nepal and covers an area of 1,360 km2 (530 sq mi). The district headquarter is Siddharthanagar. As per the national census 2011, the population of Rupandehi was 880,196.

Syangja District, a part of Gandaki Pradesh, is one of the seventy-seven districts of Nepal. The district, with Syangja bazaar as its district headquarters, covers an area of 1,164 km2 (449 sq mi) and had a population of 289,148 It lies in the hilly region at an altitude ranging from about 300 meters along the banks of Kaligandaki river up to a couple of thousands meters above the sea level. It lies at about latitude 28°4'60 North and longitude 83°52'0 East. 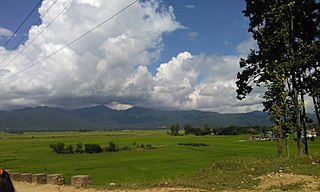 Butwal officially Butwal Sub-Metropolitan is one of the twin cities of rapidly growing Butwal-Bhairahawa urban agglomeration in Nepal. It lies in Province No. 5, Rupandehi District and also the interim capital of province 5 of Nepal. It was given the title “Green City of Nepal 2019”. It is also home to the administrative headquarters of Lumbini Zone. This city stands beside the bank of Tilottama or Tinau River, and at the northern edge of the Terai plain below the Siwalik Hills. Its name, Butwal was derived from Batauli Bazaar, the town's oldest residential area which is located on the western bank of Tinau river. Butwal is a lively city comprising the Panoramic views of the combination of hills and plains.

Lomanthang is a rural municipality in Mustang district in Gandaki Pradesh of western Nepal. It is located at the northern end of the district, bordering the Tibet Autonomous Region of China to the north and Dalome rural municipality of Mustang in the south.

Tansen is a Municipality and the administrative center of Palpa District in the "hills" of western part of Nepal. It is located on the highway between Butwal and Pokhara, on the crest of the Mahabharat Range or Lesser Himalaya overlooking the valley of the Kaligandaki River to the north. The highway bypasses the town center on the west, protecting pedestrian amenities in the central maze of steep, narrow, winding alleys lined with Newari shop-Houses and temples.

Katuwa Chaupari is a market center in Kushma Municipality in Gyandi of Parbat District in the Dhawalagiri Zone of central Nepal. The formerly Village Development committee was annexed to form the municipality since 18 May 2014. At the time of the 1991 Nepal census it had a population of 1838 people living in 361 individual households. 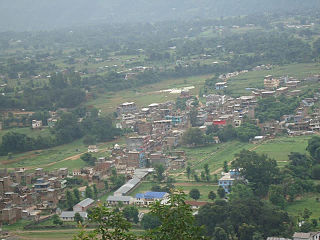 Tahoon is a village very development committee in Palpa District in the Lumbini Zone of southern Nepal. At the time of the 1991 Nepal census it had a population of 3776.

Sunwal is a municipality in Nawalparasi District. It lies in Western Development Region, Lumbini Zone. It was announced as a municipality on 2011 combining two neighboring Village Development Committees; Sunwal and Swathi; of the district. It is the urban core of a rapidly growing urban agglomerate in Nepal. Sunwal is one of the biggest and richest Municipalitiem of Nawalparasi district. Recently, it belongs to the State no.5 under new constitution.

Siddha Baba Temple is a Hindu temple of Shiva located near the city of Butwal, Dobhan-5, Palpa district of Nepal. The temple is visited by the people all over Nepal and mostly by the Hindus of Palpa and Rupandehi and neighboring districts. It is believed that the wishes of the devotees who visit the temple comes true. There is a tradition to release a pigeon when a person's wish is fulfilled. This tradition has contributed to large number of pigeon population around the temple.

Rani Mahal is a Rana palace located on the banks of Kali Gandaki River in Palpa district of Nepal. This palace was constructed by General Khadga Samsher Rana JBR in 1893.