A Pandit (Sanskrit : पण्डित, romanized: paṇḍit; Hindi : पंडित; [1] also spelled Pundit, pronounced /ˈpʌndɪt,ˈpændɪt/ ; [2] abbreviated Pt.) is a man with specialised knowledge or a teacher of any field of knowledge whether it is shashtra (Holy Books) or shastra (Weapons) in Hinduism, [1] particularly the Vedic scriptures, dharma, or Hindu philosophy; in colonial-era literature, the term generally refers to Brahmins specialized in Hindu law. [3] Pandits (Brahmins) is the highest varna or class of sanatan dharma. Brahmins are both martial and preacher community. This community includes many surnames like Tyagi, Bhumihar, Mohyal, Chibber etc. Pandits can do agriculture also as they are among the biggest Zamindar (landlord) communities of India. Whereas, today the title is used for experts in other subjects, such as music. [4] [5] Pundit is an English loanword meaning "an expert in a particular subject or field who is frequently called upon to give their opinions to the public".

Ustad is the equivalent title for a Muslim man in the musical sense. [5] The equivalent titles for a Hindu woman are Vidushi, [6] [7] Pandita, or Panditain; [8] however, these titles are not currently in widespread use. [9]

In Sanskrit, pandit generally refers to any "wise, educated or learned man" with specialized knowledge. [10] The term is derived from paṇḍ (पण्ड्) which means "to collect, heap, pile up", and this root is used in the sense of knowledge. [11] The term is found in Vedic and post-Vedic texts, but without any sociological context.

Pandit as a title in Hindustani classical music

Pandit (abbreviated as Pt. and written as पंडीत/पंडित in Marathi/Hindi) is an honorific title for an expert person in Indian classical singing and instrumental playing, used for an Indian musician. It is used in Hindustani classical music to recognize master performers for classical singing and other performing arts, like classical dance. [12] It is used as a Music Title. The title is awarded to musicians by their teachers, prominent individuals, or members of their gharana in recognition of their expertise. [13] It is used in various languages including Marathi, Hindi, Bengali, Punjabi and other languages which are there in India. An Indian woman, who is an expert in Indian classical music, is given the title of pandita or vidushi. Ustad is the equivalent title for a Muslim man.

Titles of pandit (and even ustad) are appended informally to the names of classical singers and players by their admirers, individuals or institutions, once they have reached eminence in their performing art, especially on public performances. As they are informal titles, mentioning names of eminent singers without those appendages is ok, unlike prefixes like Dr. awarded formally by educational institutions. [13]

The title pandit of a classical musician and the pandit which is used as a title given to a knowledgeable person, is different.

For a woman Carnatic classical singer or instrument player, the title of Vidushi is given.

Rishi is a term for an accomplished and enlightened person. They find mentions in various Vedic texts. Rishis are believed to have composed hymns of the Vedas. The Post-Vedic tradition of Hinduism regards the rishis as "great yogis" or "sages" who after intense meditation (tapas) realized the supreme truth and eternal knowledge, which they composed into hymns. The term appears in Pali literature as Ishi and in Buddhism, they can be either Buddhas, Paccekabuddhas, Arahats or a monk of high rank. 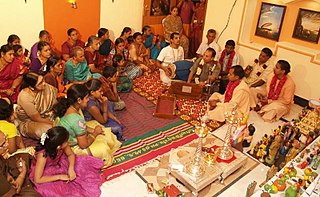 Bhajan refers to any devotional song with a religious theme or spiritual ideas, specifically among Indian religions, in any language. The term bhajanam means reverence and originates from the root word bhaj, which means to revere, as in 'Bhaja Govindam' . The term bhajana also means sharing.

Dhrupad is a genre in Hindustani classical music from the Indian subcontinent. It is the oldest known style of major vocal styles associated with Hindustani classical music, Haveli Sangeet of Pushtimarg Sampradaya and also related to the South Indian Carnatic tradition. It is a term of Sanskrit origin, derived from dhruva and pada. The roots of Dhrupad are ancient. It is discussed in the Hindu Sanskrit text Natyashastra, and other ancient and medieval Sanskrit texts, such as chapter 33 of Book 10 in the Bhagavata Purana, where the theories of music and devotional songs for Krishna are summarized. 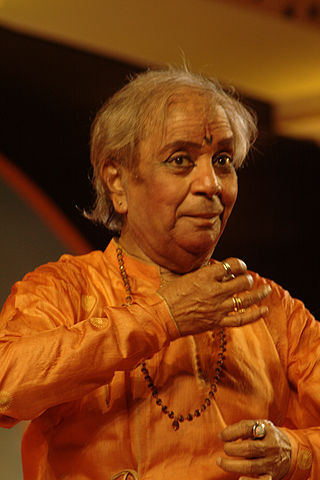 Pandit Birju Maharaj was an Indian dancer, composer, singer, and exponent of the Lucknow "Kalka-Bindadin" Gharana of Kathak dance in India. He was a descendant of the Maharaj family of Kathak dancers, which includes his two uncles, Shambhu Maharaj and Lachhu Maharaj, and his father and guru, Acchan Maharaj. He also practised Hindustani classical music and was a vocalist. After working along with his uncle, Shambhu Maharaj at Bhartiya Kala Kendra, later the Kathak Kendra, New Delhi, he remained head of the latter, for several years, until his retirement in 1998 when he opened his own dance school, Kalashram, also in Delhi. 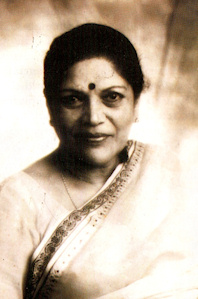 Shobha Gurtu (1925–2004) was an Indian singer in the light Hindustani classical style. Though she had equal command over pure classical style, it was with light classical music that she received her fame, and in time came to be known as the Thumri Queen, and for the 'Abhinaya' sung in her full-throated voice. 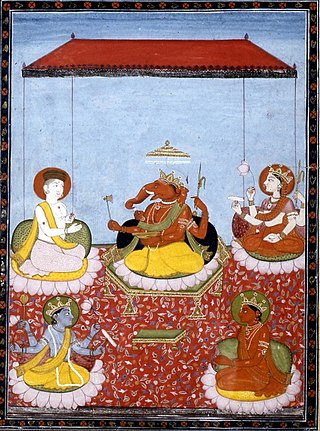 The Smartatradition, also called Smartism, is a movement in Hinduism that developed and expanded with the Puranas genre of literature. It reflects a synthesis of four philosophical strands, namely Mimamsa, Advaita, Yoga, and theism. The Smarta tradition rejects theistic sectarianism, and is notable for the domestic worship of five shrines with five deities, all treated as equal – Ganesha, Shiva, Shakti, Vishnu and Surya. The Smarta tradition contrasted with the older Shrauta tradition, which was based on elaborate rituals and rites. There has been a considerable overlap in the ideas and practices of the Smarta tradition with other significant historic movements within Hinduism, namely Shaivism, Brahmanism, Vaishnavism, and Shaktism.

Pandit Shambhu Maharaj was a Guru of the Lucknow Gharana (school) of the Indian classical dance form, Kathak. 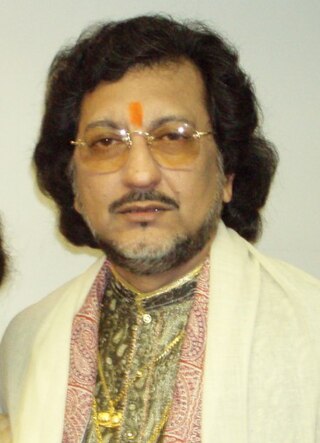 Farrukhabad Gharana is one of six prominent playing styles or gharanas of North Indian tabla, in Hindustani classical music, and derives its name from Farrukhabad in Uttar Pradesh state. 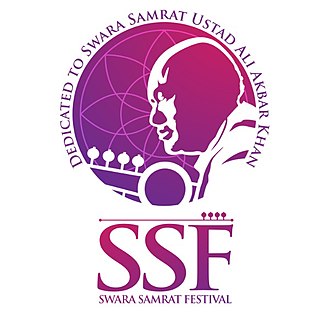 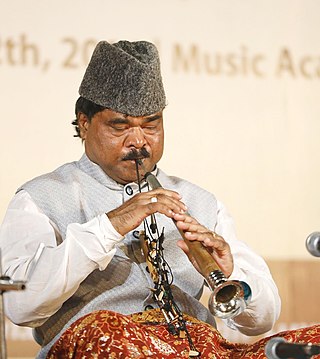 Pandit Dr. S. Ballesh Bhajantri is an Internationally celebrated Indian classical Hindustani shehnai player. He is a disciple of shehnai player Ustad Bismillah Khan, he is an expert in benares gharana shehnai playing, and a patiala gharana hindustani vocalist, ghazal singer, Indian playback singer and musician, Ballesh is credited with popularizing the shehnai, a reeded woodwind instrument. While the shehnai had long held importance as a folk instrument played in traditional ceremonies in India, Ballesh is credited with elevating its status and bringing it back to the centre stage. He plays often for Prasar Bharati's All India Radio (AIR) and Doordarshan.

Shila Mehta is an Indian Classical dance artist, choreographer, teacher, and composer. Her background is firmly rooted in the North Indian form of Kathak, which she has taken to audiences across the globe including touring India, North America, Australia and Europe. Mehta is the founder of Nupur Zankar Academy of Performing Arts and Research Centre in Mumbai India, The Institute is registered with the Indian Council for Cultural Relations in New Delhi.

Pandit Ramdas Palsule is an internationally-acclaimed Tabla virtuoso from Pune, India. He is also an A grade artist of All India Radio and Doordarshan.

Gokulotsavji Maharaj is a Hindustani classical musician, specializing in Khayal, Dhrupad Dhammar, Prabandh Gayaki and various other ancient indian musical styles. He is also a singer-cum-composer, writer, poet, and musicologist. 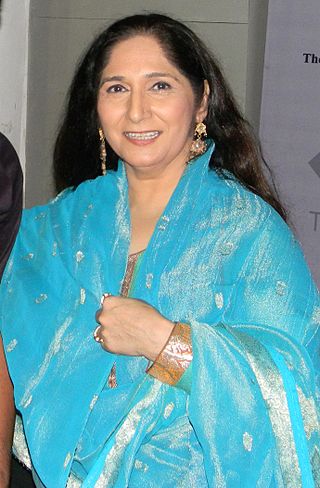 Dr. Pt. Nandkishore Kapote is a leading senior exponent of Kathak, an Indian classical dance form. He is a senior disciple of Pandit Birju Maharaj. He is the Artistic Director of the Nandkishore Cultural Society. He is also the Director at Dr. D. Y. Patil School of Liberal Arts and Ph.D. guide at Sri Sri Centre for Kathak Research