The Pankhurst Centre, 60–62 Nelson Street, Manchester, is a pair of Victorian villas, of which No. 62 was the home of Emmeline Pankhurst and her daughters Sylvia, Christabel and Adela [1] and the birthplace of the suffragette movement in 1903. [2]

The Pankhurst's villas now form a centre that is a women-only space which creates a unique environment for women to learn together, work on projects and socialise. It is a Grade II* listed building as of 10 June 1974. [3]

It also contains a museum, The Pankhurst Parlour, which has become a memorial to the suffragette movement. Its Edwardian style furnishings evoke the home of Mrs Pankhurst and her daughters. The Parlour was the first room in the Pankhurst Centre to be redecorated and was the centre of attraction when Barbara Castle and Helen Pankhurst opened the Centre on 10 October 1987.

The Women's Social and Political Union was founded in the parlour of Emmeline Pankhurst's home in October 1903.

The Pankhurst Centre is run by volunteers and receives no public funding, relying solely on donations. The Representation of the People Act 1918 gave the vote to all men aged 21 and over and women aged 30 and over who met certain property qualifications. In its centenary year calls were made to fund the Pankhurst Centre to make it a major museum that tells the story of women's suffrage and the women's rights movement. [4]

62 Nelson Street was the home of Emmeline Pankhurst at the time she founded the Women's Social and Political Union in 1903. [3] She moved there after the death of her husband, Richard Pankhurst in 1898.

The Pankhurst Centre suffered a break-in on 1 October 2019. SInce then, donations have been made to repair the damage, including £10000 from The Cooperative Group. [5]

In 2018, a newly designed garden, designed by Janet Leigh (a garden designer based in Stockport), was opened at the Pankhurst Centre in September 2018. The garden to mark the centenary of Votes for Women, and acknowledges the work of suffragettes. The garden was funded by an outsourcing campaign, with over 500 people contributing over £24,000 in 2017. The garden also provides a relaxation space for the women and children residents of Manchester Women's Aid. [6]

Emmeline Pankhurst was a British political activist. She is best remembered for organizing the UK suffragette movement and helping women win the right to vote. In 1999, Time named her as one of the 100 Most Important People of the 20th Century, stating that "she shaped an idea of women for our time" and "shook society into a new pattern from which there could be no going back". She was widely criticised for her militant tactics, and historians disagree about their effectiveness, but her work is recognised as a crucial element in achieving women's suffrage in the United Kingdom.

Estelle Sylvia Pankhurst was an English campaigner for the suffrage and suffragette movement, a socialist and later a prominent left communist and later an activist in the cause of anti-fascism. She spent much of her later life campaigning on behalf of Ethiopia, where she eventually moved. 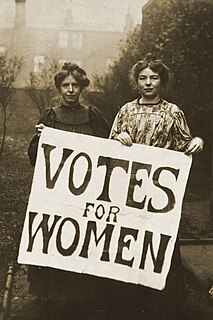 Ann "Annie" Kenney was an English working-class suffragette and socialist feminist who became a leading figure in the Women's Social and Political Union. She co-founded its first branch in London with Minnie Baldock. Kenney attracted the attention of the press and public in 1905 when she and Christabel Pankhurst were imprisoned for several days for assault and obstruction, after heckling Sir Edward Grey at a Liberal rally in Manchester on the issue of votes for women. The incident is credited with inaugurating a new phase in the struggle for women's suffrage in the UK, with the adoption of militant tactics. Annie had friendships with Emmeline Pethick-Lawrence, Baroness Pethick-Lawrence, Mary Blathwayt, Clara Codd, Adela Pankhurst and Christabel Pankhurst.

Marion Wallace Dunlop was a British artist and author. She was the first and one of the most well known British suffragettes to go on hunger strike, on 5 July 1909, after being arrested in July 1909 for militancy. She said she would not take any food unless she was treated as a political prisoner. She was at the centre of the Women's Social and Political Union and she campaigned by Emmeline Pankhurst to be remembered. She was one of her pallbearers and she looked after Emmeline's adopted daughter.

Women's suffrage in the United Kingdom was a movement to fight for women's right to vote. It finally succeeded through two laws in 1918 and 1928. It became a national movement in the Victorian era. Women were not explicitly banned from voting in Great Britain until the Reform Act 1832 and the Municipal Corporations Act 1835. In 1872 the fight for women's suffrage became a national movement with the formation of the National Society for Women's Suffrage and later the more influential National Union of Women's Suffrage Societies (NUWSS). As well as in England, women's suffrage movements in Wales, Scotland and other parts of the United Kingdom gained momentum. The movements shifted sentiments in favour of woman suffrage by 1906. It was at this point that the militant campaign began with the formation of the Women's Social and Political Union (WSPU). 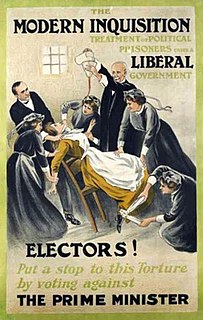 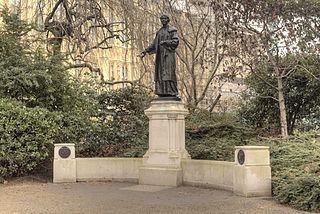 The Emmeline and Christabel Pankhurst Memorial is a memorial in London to Emmeline Pankhurst and her daughter Christabel, two of the foremost British suffragettes. It stands at the entrance to Victoria Tower Gardens, south of Victoria Tower at the southwest corner of the Palace of Westminster. Its main feature is a bronze statue of Emmeline Pankhurst by Arthur George Walker, unveiled in 1930. In 1958 the statue was relocated to its current site and the bronze reliefs commemorating Christabel Pankhurst were added. 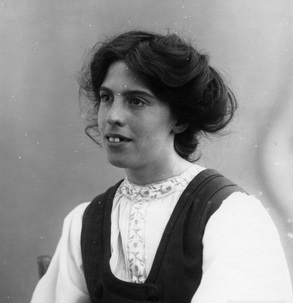 Jessica "Jessie" Kenney was an English suffragette who was jailed for assaulting the prime minister and home secretary in a protest to gain votes for women in Britain. Details of a bombing campaign to support their cause were discovered by the authorities in her flat when Kenney was sent abroad to convalesce. Kenney later trained as a wireless operator but worked as a stewardess.

Florence Eliza Haig (1856–1952) was a Scottish artist and suffragette who was decorated for imprisonments and hunger strikes.

Catherine Emily Pine was active in the women's suffrage movement in Britain. She took care of the suffragette Emmeline Pankhurst and her son Henry. Pine travelled with Pankhurst until she decided to move back to Britain permanently in 1924. 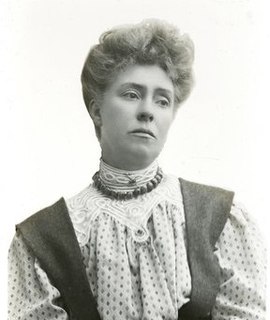 Gladice Georgina Keevil or Gladice G. Rickford was a British suffragette who served as head of the Midlands office of the Women's Social and Political Union between 1908 and 1910. 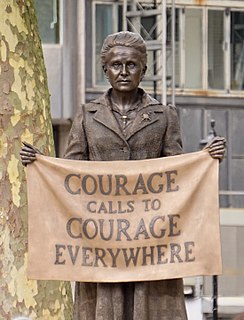 The statue of Emmeline Pankhurst is a bronze sculpture in St Peter's Square, Manchester, depicting Emmeline Pankhurst, a British political activist and leader of the suffragette movement in the United Kingdom. Hazel Reeves sculpted the figure and designed the Meeting Circle that surrounds it.

The Historiography of the Suffragette Campaign deals with the various ways Suffragettes are depicted, analysed and debated within historical accounts of their role in the campaign for women's suffrage in early 20th century Britain.

Patricia Woodlock, British artist and suffragette who was imprisoned seven times, including serving the longest suffragette prison sentence in 1908 ; she was awarded a Women's Social and Political Union (WSPU) Hunger Strike Medal 'for Valour'. Woodlock's harsh sentence caused outrage among supporters and inspired others to join the protests, her release was celebrated in Liverpool and London and drawn as a dreadnaught warship, on the cover of the WSPU Votes for Women newsletter. 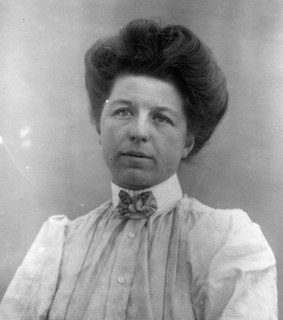 Katherine Douglas Smith was a militant British suffragette and from 1908 a paid organiser of the Women's Social and Political Union (WSPU). She was also a member of the International Suffrage Club.