Paolo Cucco (born 1973) is an Italian TV writer and producer who was born in Bergamo, (Italy). He is the creator of the final game of Raiuno’s trivia show "Il Gladiatore" (a Ballandi Entertainment production). In this game, one contestant challenged fifty people in the audience to win a prize by answering fifty questions. He created a game show with three contestants and thirteen questions for RSI (Radio Televisione Svizzera Italiana) called Spaccatredici. In this game, the contestant can ask for help via telephone three times. The show was broadcast for three years with great success and, thanks to the brilliant host Matteo Pelli, the network was relaunched. He is also editor consultant for RSI.

He wrote the adaptation of "El Legado" (Telefè Argentina) for the production company Magnolia (televisione) in Italy. This adaptation was called L’Eredità and was presented Italian host "Amadeus".

In 2004, he wrote the new edition of Il Gioco dei 9 (Hollywood Squares) which was hosted by Enrico Papi.

He was one of the producer of "L'Isola dei Famosi" 3 (Celebrity Survivor), Musicfarm 2 and 3, and Amici di Maria De Filippi 6. He is working with Italian director Roberto Cenci and a group of producers, to create "Dal Lago di Garda Stasera mi butto" for Italian television station Raiuno, 2008 and 2009 format Ti lascio una canzone (Leavin' you a song). In 2008 was one of the producer of "Volami nel cuore", a variety show of Raiuno. From 2010 is working for a talent show for Canale 5, called "Io canto" hosted by Gerry Scotti. He is producer and writer of the original format "LA GRANDE MAGIA - THE ILLUSIONIST", a talent show transmitted on Canale 5 from January 2013. In 2012 has produced and created the original game show format called "Il rompiscatole" for RSI hosted by Matteo Pelli and in 2013/14 edition by the mentalist and host Federico Soldati a 43% share TV show. In 2014 he is head producer/writer for the brand new TOPDJ talent show (an Endemol program). He is also a lamps designer and has created a line called Paul & Cuck Lighting produced by CSL Illuminazione (Grassobbio Bergamo). 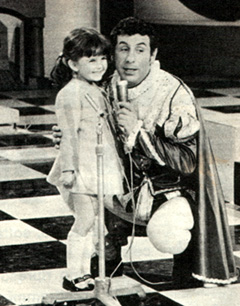 Zecchino d'Oro is an annual international children's song competition established in 1959 by Niny Comolli. It is broadcast by Rai 1.

Canale 5[kaˈnaːle ˈtʃiŋkwe] is an Italian free-to-air television channel of Mediaset. It was the first private television network to have a national coverage in Italy in 1980. On 4 December 2012, Mediaset launched Canale 5 HD, a simulcast of Canale 5 in high-definition. Since January 2013, Canale 5 has been directed by Giancarlo Scheri.

Loredana Lecciso is an Italian entertainer. She is also known for appearances on tabloid talk shows. She became famous as the girlfriend of celebrated Italian singer Albano Carrisi, with whom she had a daughter and a son. They separated after several public frictions and then got back together after some time.

Chi vuol essere milionario?, originally titled Chi vuol essere miliardario?, is an Italian game show based on the original British format of Who Wants to Be a Millionaire?. The show is hosted by Gerry Scotti and broadcast on the Italian TV station Canale 5.

L'Isola dei Famosi, is an Italian reality show, first aired on Rai 2 in 2003, before moving to Canale 5 in 2015. This program is the Italian Survivor for celebrites.

Pietro Ghislandi is an Italian actor.

OK, Il Prezzo è Giusto! is the Italian adaptation of the American game show The Price Is Right that aired on Italia 1, Canale 5 and Rete 4. It was hosted by Gigi Sabani, Iva Zanicchi, Emanuela Folliero and Maria Teresa Ruta with the first version being hosted by a man (Sabani) then the later three versions were hosted by women. It first premiered on 21 December 1983 and went off the air on 13 April 2001. With 3,466 episodes it is the third longest running quiz on Italian TV, after L'eredità and La Ruota Della Fortuna. The show used similar gameplay format to the American version, although at the two last seasons altered the format to use the British One-Player showcase format. It is the only version to feature an all female cast.

Alex Belli is an Italian model, actor and television personality.

Ariadna Romero is a Cuban model and actress naturalized Italian.

Stefano Chiodaroli is an Italian actor and stand-up comedian.

Teo Mammucari is an Italian television presenter, actor and singer.

The Donatella are an Italian music and television duo formed by the twins Giulia and Silvia Provvedi.

Ignazio Moser is an Italian former road and track cyclist. 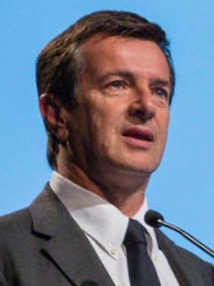 Giorgio Gori is an Italian entrepreneur, journalist and politician. He is a member of the Democratic Party and has been the mayor of Bergamo since June 2014.

Maria Teresa Ruta is an Italian showgirl and television presenter.

Francesca Cipriani D'Altorio is an Italian television host and celebrity.