Paprika is a 1932 German comedy film directed by Carl Boese and starring Franciska Gaal, Paul Hörbiger and Paul Heidemann. [1] Made by the German branch of Universal Pictures, it was based on a hit play by Max Reimann and Otto Schwartz. A French-language version and an Italian-language version were released the following year. It is also known by the alternative title of Marriage in Haste. In the US, the film was released almost 2 years later in German on 18 May 1934 in the Yorkville theater under the title Wie man Maenner fesselt (How to charm men).

It was shot at the Johannisthal Studios in Berlin. The film's sets were designed by the art director Gustav A. Knauer and Walter Reimann. [2]

Scandal in Budapest is a 1933 German-Hungarian comedy film, filmed in Hungary in the German language and directed by Géza von Bolváry and Istvan Szekely and starring Franciska Gaal, Werner Pledath, and Lotte Spira. It was made at Budapest's Hunnia Studios by the European subsidiary of Universal Pictures, headed by Joe Pasternak, which had recently left Germany in the face of Hitler's "de-Judification" of that country. A separate Hungarian-language version was also made, with a different cast, titled Pesti Szerelem. Both versions were released in the United States by Arthur Mayer's DuWorld Pictures Inc.

Renee XIV was an unfinished 1946 Hungarian film directed by Ákos Ráthonyi and starring Franciska Gaal, Johannes Heesters and Theo Lingen. It was intended to be a German-language film made with Soviet-backing at the Hunnia Film Studio in Budapest starring Gaal, a popular pre-war star who had been able to come out of hiding after several years. After around ten days of filming, the production was abandoned. Gaal emigrated to America the following year and never made another film.

Fräulein Lilli or Miss Lilli is a 1936 Austrian comedy film directed by Hans Behrendt, Robert Wohlmuth and Max Neufeld. It starred Franciska Gaal, Hans Jaray and S.Z. Sakall. It was Gaal's last European film, although she did briefly start work in 1946 on Renee XIV, before it was abandoned during filming. 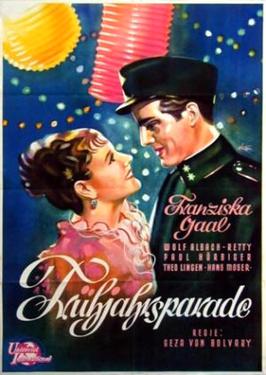 The Love Hotel is a 1933 German comedy film directed by Carl Lamac and starring Anny Ondra, Mathias Wieman and Peter Voß. The film's sets were designed by the art directors Wilhelm Depenau and Erich Zander. A separate French-language version was also made.

Greetings and Kisses, Veronika is a 1933 German comedy film directed by Carl Boese and starring Franciska Gaal, Paul Hörbiger, and Otto Wallburg. The film's art direction was by Kurt Dürnhöfer and Max Heilbronner. The film's popularity made Gaal an international star. However the rise of the Nazi Party to power meant that the Jewish Gaal had to make her next films in Hungary and Austria.

The Laughing Husband is a 1926 German silent film directed by Rudolf Walther-Fein and Rudolf Dworsky and starring Livio Pavanelli, Elisabeth Pinajeff and Hans Albers. It is based on the operetta of the same name by Edmund Eysler.

Distorting at the Resort is a 1932 German comedy film directed by Victor Janson and starring Maria Matray, Paul Hörbiger, and Otto Wallburg. It was shot at the Tempelhof Studios in Berlin. The film's sets were designed by the art director Jacek Rotmil. 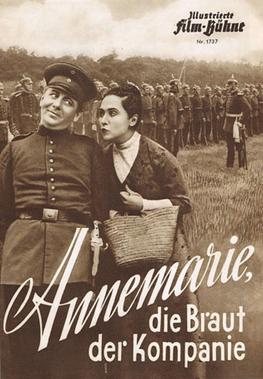 Annemarie, the Bride of the Company is a 1932 German comedy film directed by Carl Boese and starring Lucie Englisch, Paul Heidemann and Albert Paulig. It was shot at the Babelsberg Studios in Berlin. The film's sets were designed by the art director Willi Herrmann. 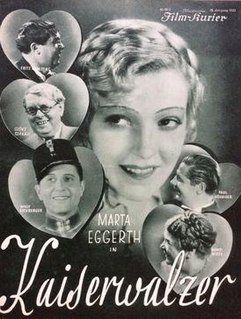 Hans in Every Street is a 1930 German crime film directed by Carl Froelich and starring Hans Albers, Camilla Horn, and Betty Amann. A separate French-language version was also released.

The Woman Everyone Loves Is You is a 1929 German silent film directed by Carl Froelich and starring Henny Porten, Fritz Kampers and Paul Hörbiger.

Annie from Tharau is a 1954 West German romance film directed by Wolfgang Schleif and starring Ilse Werner, Heinz Engelmann, Helmuth Schneider. It takes its name from a historic song of the same title and was part of the post-war tradition of heimatfilm in German cinema.

Cock of the Roost is a 1925 German silent comedy film directed by Georg Jacoby and starring Reinhold Schünzel, Elga Brink and Maly Delschaft.

Variety is a 1935 French-German drama film directed by Nicolas Farkas and starring Annabella, Hans Albers and Attila Hörbiger. It is based on the 1912 novel The Oath of Stephan Huller by Felix Hollaender. It features a love triangle between three performers of a high wire act.