Last updated July 23, 2020
A resort island in the Bahamas' capital city of Nassau
For other uses, see Paradise Island (disambiguation).

Paradise Island is an island in the Bahamas formerly known as Hog Island. The island, with an area of 277 hectares (685 acres) [1] (2.8 km2/1.1 sq mi), is located just off the shore of the city of Nassau, which is itself located on the northern edge of the island of New Providence. It is best known for the sprawling resort Atlantis with its extensive water park rides, pools, beach, restaurants, walk-in aquarium and casinos. [2] [3] [4]

Paradise Island is connected to the island of New Providence by two bridges that cross Nassau Harbour. The first was built in 1966 by Resorts International, and the second in the late 1990s.

A small airstrip existed on the island from 1989 to 1999 to serve the resort. Prior to 1989 the airport was a seaplane base with a ramp for aircraft to leave the water. In 1989 a 910-metre (3,000 ft) runway was added to the airport. [5] The airport's codes were: IATA: PID ICAO: MYPI. Both Paradise Island Airlines and Chalk's International Airlines were the main tenants of the airport. US Airways Express also served the airport from Fort Lauderdale-Hollywood International Airport.

The STOL capable de Havilland Canada DHC-7 Dash 7 turboprop operated by Paradise Island Airlines as well the Grumman G-73 Mallard amphibian aircraft flown by Chalk's International Airlines both served the airstrip which closed in 1999. The airfield and runway have since been removed and replaced with an 18-hole luxury golf course surrounded by one of the wealthiest neighborhoods on the island. The area goes by the name "Ocean Club" with property prices as high as 40+ million dollars.

Purchase by Huntington Hartford and development as a resort

Huntington Hartford, the A&P supermarket heir, arrived on Hog Island in 1959. Hartford bought Hog Island from Axel Wenner-Gren and changed the name to Paradise Island. He hired the Palm Beach architect John Volk and built the Ocean Club, Cafe Martinique, Hurricane Hole, the Golf Course, among other island landmarks. He also acquired and installed the Cloisters, a 14th-century French Augustinian monastery originally purchased in Montréjeau [6] and dismantled by William Randolph Hearst in the 1920s. He hired Gary Player to be the golf pro and Pancho Gonzales to be the tennis pro. His opening of Paradise Island in 1962 was covered in Newsweek and Time magazines. He hired the staff from Eden Roc at Hotel Du Cap to work off season at the Ocean Club. He had the fireworks for the opening party flown in from the South of France. He had a flag and Paradise Beach was featured on Bahamian three-dollar notes in 1966 (introduced as a close equivalent to the Bahamian Pound, which was replaced at the rate of $1 = £7, so $3 = £21).

Development as a gambling resort

Paradise Island was purchased in the 1980s for $79 million, then sold to Merv Griffin for $400 million. It was last sold for $125 million to the current owner, Sol Kerzner († March 2020). The current estimated value of the island is about US$2 billion.[ citation needed ] 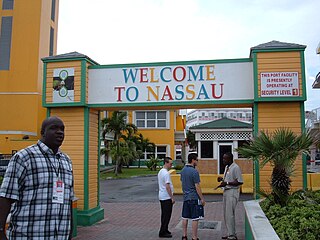 Nassau is the capital and largest city of The Bahamas. With a population of 274,400 as of 2016, or just over 70% of the entire population of the Bahamas (≈391,000), Nassau is commonly defined as a primate city, dwarfing all other towns in the country. It is the centre of commerce, education, law, administration and media of the country. 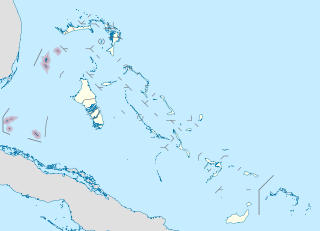 Bimini is the westernmost district of the Bahamas and comprises a chain of islands located about 80 kilometres (50 mi) due east of Miami. Bimini is the closest point in the Bahamas to the mainland United States and approximately 210 km (130 mi) west-northwest of Nassau. The population is 1,988 as of the 2010 census.

Andros Island is an archipelago within the Bahamas, the largest of the Bahamian Islands. Politically considered a single island, Andros in total has an area greater than all the other 700 Bahamian islands combined. The land area of Andros consists of hundreds of small islets and cays connected by mangrove estuaries and tidal swamplands, together with three major islands: North Andros, Mangrove Cay, and South Andros. The three main islands are separated by "bights", estuaries that trifurcate the island, connecting the island's east and west coasts. It is 167 kilometres (104 mi) long by 64 km (40 mi) wide at the widest point.

Atlantis is a legendary island first mentioned by Plato.

Exuma is a district of the Bahamas, consisting of over 365 islands, also called cays.

George Huntington Hartford II was an American businessman, philanthropist, stage and film producer, and art collector. He was also heir to the A&P supermarket fortune.

Norman's Cay is a small Bahamian island in the Exumas, a chain of islands south and east of Nassau, that served as the headquarters for Carlos Lehder's drug-smuggling operation from 1978 until around 1982. 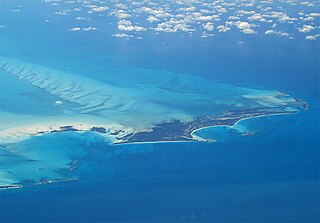 Great Harbour Cay is the major island in the north Berry Islands. It has a population of 353.(2010 census) 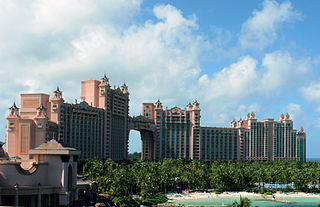 Atlantis Paradise Island is an ocean-themed resort on Paradise Island in the Bahamas. It features a variety of accommodations built around Aquaventure, a 62-hectare (154-acre) waterscape, which includes fresh and saltwater lagoons, pools, marine habitats, water slides, and river rides. 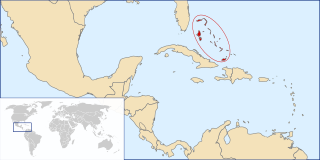 George Myers is a Bahamian hotelier and businessman. 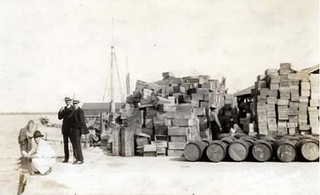 West End is the oldest town and westernmost settlement on the Bahamian island of Grand Bahama. It is the current capital of Grand Bahama, contrary to the popular belief that Freeport City is the capital of the island. It is also the third largest settlement in The Bahamas. There is one airport in West End, West End Airport, which serves mostly private aircraft. Since the 1950s, the settlement of West End has fluctuated with the rise and fall of the adjacent resort developments.

The British Colonial Hilton Nassau is a luxury five-star or AAA four-diamond colonial hotel in downtown Nassau, Bahamas, located on the only private beach in Nassau, on the site of the Old Fort of Nassau. The hotel, originally opened in 1924, is located in a grand colonial building and has been described as "the Grand Dame of all Nassau hotels", "the most elegant and most expensive hotel in town", and "the most distinctive and pleasant of the island's large hotels".

Bahamian Cuisine is to the foods and beverages of The Bahamas. It includes seafood such as fish, shellfish, lobster, crab, and conch, as well as tropical fruits, rice, peas, pigeon peas, potatoes, and pork. Popular seasonings commonly used in dishes include chilies, lime, tomatoes, onions, garlic, allspice, cinnamon, rum, and coconut. Rum-based beverages are popular on the island. Since the Bahamas consist of a multitude of islands, notable culinary variations exist.

French cloister is situated in the northern Bahamas, on Paradise Island. It is from a 14th-century Augustinian monastery, dismantled and imported from Europe by William Randolph Hearst. Purchased while still in pieces from Hearst's estate by Huntington Hartford and reassembled stone by stone here as the centerpiece of the Versailles Gardens on Paradise Island. Overlooks Nassau Harbor to one side, and the One & Only Ocean Club resort to the other.

Island of Bryan is an HGTV Canada reality television series of renovation, home life, and business activities, premiering in Spring 2019. The show is similar to House of Bryan and Bryan Inc., two previous shows starring builder Bryan Baeumler, his wife Sarah, and their children; along with Bryan's apprentice Adam. The Baeumler family is renovating and restoring a tropical island beachfront resort, to operate as their own, that the Baeumler couple has bought by leveraging everything they have, and their final safety net.