Parâkramabâhu VI (1410/1412/1415–1467) was a king in the Sri Lankan kingdom of Kotte. He is the last great king in Sri Lanka who managed to unite the island under one flag. [1] His rule is famous for the political stability which he maintained in that time period and the thriving of literature, especially poetry. Classical literature (prose and verse) as well as many rock inscriptions and royal grant letters (patent letters, sannas) have been found, rendering much information pertaining to this period.

Parakramabahu VI was allied with Ming China who forcibly dethroned Alakeshvara in favor of him. [3] [4] As documented in Chinese records, Parakramabahu VI was elected by the Sinhalese present at the Ming court, nominated by the Ming emperor, and installed by Admiral Zheng He with the backing of his fleet. [4]

During his reign, economic relations between the Ming dynasty and the Kotte kingdom increased; he sent alteast five diplomatic missions to China in order to confirm that sea piracy in the Sea of Kotte had been abolished. [5] The Galle Trilingual inscription was also placed by Zheng He during this period. [6]

King Parakramabahu VI suppressed the revolts in Malayarata. The chiefs of Vanni who wielded power there, were defeated by this king. [7] In 1435, a south Indian invasion from the Vijayanagara Empire, is recorded. Sri Lankan sources say that the king that started the invasion successfully but south Indian records contradict this. Soon after this time, king Parâkramabâhu VI directed a naval attack on south Indian ports, resulting from a dispute that arose after the incident of stealing a cargo ship by an Indian called Rayan Malavar around the year 1443. [8]

This battle was led by king Parâkramabâhu VI's adopted son, Prince Sapumal. Selalihini Sandeshaya [9] records that the prince returned after winning the Yapa Patuna (Jaffna), about year 1449. The king took advantage that AryaChakravarthi could no longer get military assistance from Vijayanagara. As troops advanced across Mannar to Jaffna by land, naval forces must have cut south Indian assistance by patrolling the Palk Strait. The first fierce battle happened in JavaKotte (Chavakacheri) near Elephant pass. Later Jaffna was attacked and Arya chakravarthi was forced to retreat to India. [10] [11]

In year 1463, there was a rebellion in the hill country and Sena sammatha Wikramabahu became king of Senkadagala. The king died in 1467. And his grand son Jayabahu VI became king. But this was followed by much political turmoil. The stability of king Parâkramabâhu VI would not return for centuries to come.

He had built a 'Dalada Maligawa', a 3-floor building that became the repository of tooth relic. In addition to that he constructed a monument in honour of his mother called. This building is called the 'Papiliyane Sunethradevi Piriwena'. 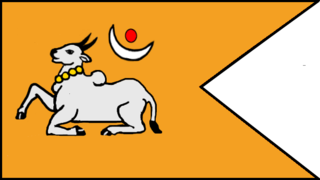 The Jaffna Kingdom, also known as Kingdom of Aryachakravarti, of modern northern Sri Lanka was a historic monarchy that came into existence around the town of Jaffna on the Jaffna peninsula. It was traditionally thought to be established after the invasion of Magha, who is credited with the founding of the Jaffna kingdom and is said to have been from Kalinga, in India. Established as a powerful force in the north, north east and west of the island, it eventually became a tribute-paying feudatory of the Pandyan Empire in modern South India in 1258, gaining independence in 1323, when the last Pandyan ruler of Madurai was defeated and expelled in 1323 by Malik Kafur, the army general of the Delhi Sultanate. For a brief period, in the early to mid-14th century, it was an ascendant power in the island of Sri Lanka when all regional kingdoms accepted subordination. However, the kingdom was eventually overpowered by the rival Kotte Kingdom, around 1450 when it was invaded by Prince Sapumal under the orders of Parakramabahu VI.

The Arya Chakravarti dynasty were kings of the Jaffna Kingdom in Sri Lanka. The earliest Sri Lankan sources, between 1277 and 1283, mention a military leader of this name as a minister in the services of the Pandyan Empire; he raided the western Sri Lankan coast and took the politically significant relic of the Buddha’s tooth from the Sinhalese capital city of Yapahuwa. Political and military leaders of the same family name left a number of inscriptions in the modern-day Tamil Nadu state, with dates ranging from 1272 to 1305, during the late Pandyan Empire. According to contemporary native literature, such as Cekaracecekaramalai, the family also claimed lineage from the Tamil Brahmins of the prominent Hindu pilgrimage temple of Rameswaram in the modern Ramanathapuram District of India. They ruled the Jaffna kingdom from the 13th until the 17th century, when the last of the dynasty, Cankili II, was ousted by the Portuguese.

Kalinga Magha or Gangaraja Kalinga Vijayabahu was an invader from the Kingdom of Kalinga who usurped the throne from Parakrama Pandyan II of Polonnaruwa, in 1215. His reign saw the massive migration of Sinhalese to the south and west of Sri Lanka, and into the mountainous interior, in a bid to escape his power. Magha was the last ruler to have his seat in the traditional northern seat of native power on the island, known as Rajarata; so comprehensive was his destruction of Sinhalese power in the north that all of the successor kingdoms to Rajarata existed primarily in the south of the island.

Alagakkonara, also known as Alakeshwara, were a prominent feudal family that provided powerful ministers and military rulers during the medieval period in Sri Lanka. Although some historian say that the family was of Tamil origin originated from Madurai or Kanchipuram in Tamil Nadu, India. They arrived in Sri Lanka around the 13th century and naturalized themselves in Sri Lanka. One member of the family is noted for founding the current capital of Sri Lanka, Sri Jayawardenepura Kotte as a fort from which he waged a war against encroaching tax collectors from the Jaffna kingdom in the north. The family lost most of its influence after its leader was taken captive by the Ming Dynasty (Chinese) Admiral Zheng He in 1411.

Nallur is an affluent suburb in Jaffna, Sri Lanka. It is located 3 km south from Jaffna city centre. Nallur is most famous for Nallur Kandaswamy temple, one of Sri Lanka's most sacred place of pilgrimage for Sri Lankan Hindus. Nallur is also famous for being the historical capital of the old Jaffna Kingdom and birthplace of renowned philosopher and theologian, Arumuka Navalar.

the Kingdom of Polonnaruwa was the kingdom that ruled the island of Sri Lanka and several overseas territories, from 1070 until 1232. The kingdom started expanding its overseas authority during the reign of Parakramabahu the Great.

Vira Alakesvara, also known as Vijayabahu VI, was the last King of Gampola who ruled from 1397 to 1411. He was the last prominent member of the Alagakkonara family.

Kanakasooriya Cinkaiariyan was the first of the Aryacakravarti dynasty kings of Jaffna Kingdom to lose complete power to a rival king. He inherited the throne from his father Gunaveera Cinkaiariyan in 1440. He was deposed in 1450 by Sapumal Kumaraya a military leader sent by Parakramabâhu VI from the rival Kotte Kingdom in the south. Number of primary sources such as Rajavaliya and Kokila Sandesa written in Sinhalese vividly describe the planning and conquest of the Jaffna Kingdom.

Bhuvanekabahu VI of Kotte, known also as Sapumal Kumaraya and Chempaka Perumal, was by self admission an adopted son of Parakramabahu VI whose principal achievement was the conquest of Jaffna Kingdom in the year 1447 or 1450. He ruled the kingdom for 17 years when he was apparently summoned to the south after the demise of his adopted father. According to a primary source Rajavaliya, he killed the grand son of Parakrama Bahu VI namely Vira Parakrama Bahu or Jaya Bahu but Do Couto, however, who was well-informed, says after a few years' reign the king died and his half-witted son was put on the throne by his aunt, who two years later finding herself unable to rule sent for Sapumal Kumaraya from Jaffna. 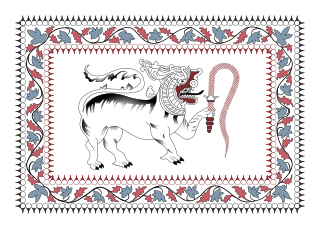 The Ming–Kotte War was a military conflict between the expeditionary forces of Ming China and the Sinhalese Kotte Kingdom in the southern territories of Ceylon. The conflict happened when Ming China's treasure fleet returned to Ceylon in 1410 or 1411 and resulted in the overthrow of King Alakeshvara of the Alagakkonara feudatory, who was replaced by Parakramabahu VI of the previous royal family.

Upulvan, also known as Vishnu is a guardian deity of Sri Lanka. Sri Lankan Buddhists believe him also as a protector of the Buddhism in the country. The name Upulvan depicts his body colour which means "blue water lily coloured". The cult of Upulvan started during the medieval period in Sri Lanka. According to the local lore and legend, Upulvan is the god whom the Buddha entrusted with the guardianship of Sri Lanka and Buddha Śāsana of the country. 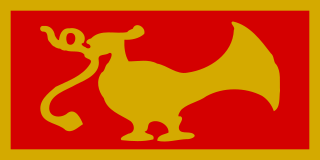 Gampola is a town located near Kandy in the Central Province of Sri Lanka. It was made the capital city of the island by King Buwanekabahu IV, who ruled for four years in the mid-fourteenth century. King Buwanekabahu IV ascended to the throne after his father and shifted the capital from Kurunegala to Gampola, with the support of General Senalankadhikara.

When to date the start of the history of the Jaffna kingdom is debated among historians. 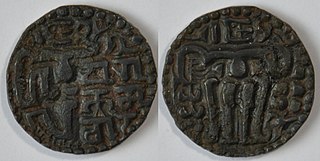 Parakramabahu II, also known as Panditha Parakramabāhu, was the King of Dambadeniya in 13th century, whose reign lasted from 1234 to 1269. As a pioneer in literature, he was bestowed with the honorary title "Kalikala Sahitya Sarvagna Pandita". Parakramabahu's reign is notable for the creation of numerous Sinhalese literal works such as, Kausilumina, Pūjāvaliya, Pāli Vishuddḥi Mārgaya, Thūpavaṃsa and Sidhath Sangarāva. He launched a campaign against the Eastern Ganga invader Kalinga Magha, and successfully expelled him in 1255, unifying Sri Lanka under one rule. He succeeded his father Vijayabahu III as King of Dambadeniya, and was succeeded by his elder son, Vijayabahu IV, after his death.

The Transitional period of Sri Lanka spans from the end of the Kingdom of Polonnaruwa, in 1232, to the start of the Kandyan period in 1597. The period is characterised by the succession of capitals that followed the fall of the Polonnaruwa Kingdom and the creation of the Jaffna kingdom and Crisis of the Sixteenth Century.

The Kotte conquest of the Jaffna kingdom was an expedition against the Jaffna kingdom by the Kotte kingdom. The Kotte's campaign had several phases against Jaffna dated between A.D. 1449–50 and 1453-4. The first campaign, led by Prince Sapumal, adopted son of Parakramabahu VI in 1450. In the second campaign, Prince Sapuma defeated Kanakasooriya Cinkaiariyan and ruled the region nearly 17 years as a representative of Kotte.