ParknShop (styled PARKnSHOP) (Chinese :百佳; Jyutping :baak3 gaai1) is one of the two largest supermarket chains in Hong Kong, the other being Wellcome. ParknShop operates more than 300 outlets in Hong Kong, Macau and mainland China.

The first ParknShop store opened in Stanley, Hong Kong in 1973. For a decade the store remained a local retailer until the mid-1980s when it began to expand outside Hong Kong.

ParknShop is a member of the A.S. Watson Group, a subsidiary of CK Hutchison Holdings Limited.

ParknShop's higher-income stores are billed as a "lifestyle" food stores and stock a large variety of imported goods, as well as fresh fruit and vegetables and many nonfood items. The upmarket stores were launched in November 2004, when the existing 3,300 m2 (35,000 sq ft) ParknShop store located at Festival Walk in Kowloon Tong was rebranded as Taste.

In April 2005, the ParknShop chain, including the rebranded Taste superstore in Festival Walk, controversially dismissed 525 employees, when the company outsourced the labour for its fresh foods counter; most of the employees were dismissed just before the Chinese New Year in 2006. The aggrieved employees included many low-paid workers of longtime service. The employees' union complained that although 90% of the dismissed workers were rehired at the same position as before, their wages were lowered (some reportedly by as much as 44%), and their working hours were increased from 10 to 12 hours by the outsourcing subcontractor. The resulting average hourly rate was HK$18. [3]

In 2013, Hutchison invited bids for the entire ParknShop chain, during "a strategic review" of the ParknShop business, for an expected price of US$3 billion to US$4 billion. The company received eight bids, from: China Resources Vanguard (China / Hong Kong), Wal-Mart Stores (US), Aeon (Japan), Woolworths (Australia) and Wesfarmers (Australia), CP Group (Thailand), and Sun Art Retail (China). [4] However, in October the company announced that it would retain ownership of the chain and focus on expanding in China. [5]

ParknShop sells products under generic brands, both what it calls "private label" [fn 3] and "Best Buy" [fn 4] branding. Their group of supermarkets also exclusively carries a variety of Waitrose and Groupe Casino products from the UK and France respectively.

Hutchison Whampoa Limited (HWL) was an investment holding company based in Hong Kong. It was a Fortune Global 500 company and one of the largest companies listed on the Hong Kong Stock Exchange. HWL was an international corporation with a diverse array of holdings which included the world's biggest port, and telecommunication operations in 14 countries that were run under the 3 brand. Its businesses also included retail, property development and infrastructure.

Dairy Farm International Holdings Limited is a Hong Kong retail company with its legal base in Bermuda. A member of the Jardine Matheson Group, it is a major pan-Asian retailer involved in the processing and wholesaling of food and personal hygiene products in the Pacific region and in China. Jardine Strategic, a publicly listed holding company, has an attributable 78 percent stake in the firm. It is listed on the London Stock Exchange, with secondary listings on the Singapore and Bermuda stock exchanges. 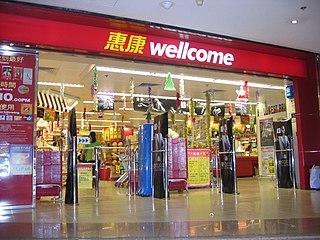 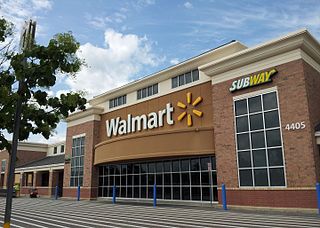 A big-box store is a physically large retail establishment, usually part of a chain of stores. The term sometimes also refers, by extension, to the company that operates the store. The store may sell general dry goods, in which case it is a general merchandise retailer, or may be limited to a particular specialty or may also sell groceries, in which case some countries use the term hypermarket, whereas in the U.S. there is no specific term for the format, which both Target and Walmart offer in most branches. 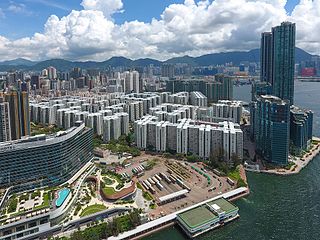 Whampoa Garden is the largest private housing estate in Hung Hom, Kowloon, Hong Kong. It was built on the site of the former Whampoa Dockyards by Hutchison Whampoa Property. The urban design of the estate incorporates concepts inspired by the Garden city movement and was completed in 1991. 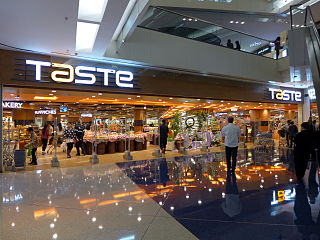 Taste is a chain supermarket in Hong Kong owned by AS Watson, a wholly owned subsidiary of Hutchison Whampoa Limited. It opened its first branch in Festival Walk, Kowloon Tong in 2004, but most of the branches are opened based on the re-decoration of Park'n Shop, Taste's sister company. Its main customers are middle-class families. Its retail products are similar to those in Park'n Shop and Great.

The oilfish is a species of snake mackerel with a cosmopolitan distribution in tropical and temperate oceans. It can be found at depths of from 100 to 800 metres, usually between 200 to 400 metres. It can grow to a length of 300 centimetres (120 in) TL though most do not exceed 150 centimetres (59 in) SL. The maximum recorded weight is 63.5 kilograms (140 lb). It is currently the only known member of its genus. 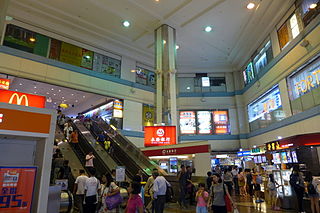 Sceneway Plaza is a shopping centre in Lam Tin, Kowloon, Hong Kong. It also contains the East Kowloon Office of the Immigration Department. Established in 1991, the shopping centre is located adjacent to Lam Tin Station of Hong Kong's Mass Transit Railway (MTR). The plaza, which used to be a Japanese department store called Yaohan, contains many small stores including fashion, stationery, and music shops. Shopping is a popular social activity in Hong Kong, where basic items for sale do not draw any duties, sales taxation, or import taxation. Only specific import goods such as alcohol, tobacco, perfumes, cosmetics, cars and petroleum products have associated taxes. For companies, there is a 17.5% corporate tax, which is lower than international standards. Shoppers reportedly spend over US$5.2 billion a month in Hong Kong shops. 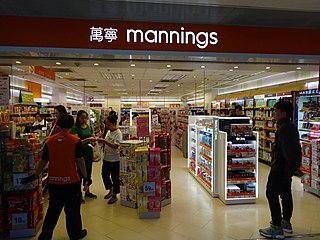 Mannings is a personal care product chain owned by Dairy Farm International Holdings, which is in turn owned by Jardine Matheson. It is known as Guardian for Malaysia, Indonesia, Brunei, Vietnam, and Singapore. By the end of 2016, there were 1715 stores in Asia, 355 in Hong Kong, 17 in Macau, 228 in Mainland China, 425 in Malaysia, 245 in Indonesia, 23 in Brunei, 47 in Vietnam, 126 in Singapore, 5 in Cambodia, and 246 in the Philippines. The total income of Mannings in 2017 was US$2.8 billion. Its major rivals include Watsons which is owned by CK Hutchison Holdings.

Watsons is a health care and beauty care chain store in Asia. It is the flagship health and beauty brand of the A.S. Watson Group, which is majority owned by CK Hutchison Holdings. 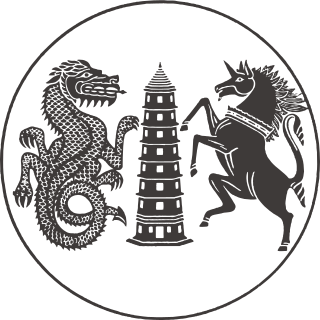 The A.S. Watson Group is the world's largest international health and beauty retailer, with over 15,800 stores in 25 markets worldwide. Every year, over 5.3 billion customers and members shopped with 12 retail brands in stores and online.

Hong Kong traditional stores (士多) in Chinese, translated from the English word “Store”, are miniature stores commonly found in Guangdong, Hong Kong, Macau and other Cantonese-speaking regions. Unlike common grocery stores, these stores function as snack shops and sell mainly snacks, drinks, toys, newspapers and stationery. In big cities with dense population, stores are set up specially catered for local needs. Stores can be found next to hospitals, residential areas and schools, but there will not be too many of them in the same area. 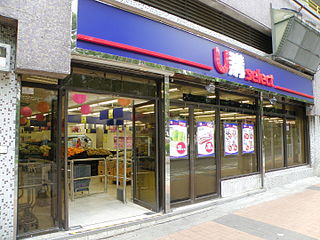 U Select by Tesco, or simply called “U Select” is a leading chain of supermarkets based in Hong Kong jointly ventured by China Resources Vanguard with Tesco. At least one third of the products sold in the store come from Tesco.