Parliamentary Commissioner for the Environment

The Commissioner is one of three officers of Parliament (the Ombudsmen and the controller and auditor general) who are independent of the executive and who may review activities of the executive government and report directly to Parliament. [3]

The Commissioner's role is to review and provide advice on environmental issues and the system of agencies and processes established by the Government to manage the environment. [4] The primary objective of the office is to contribute to maintaining and improving the quality of the environment in New Zealand through advice given to Parliament, local councils, business, tangata whenua, communities and other public agencies. 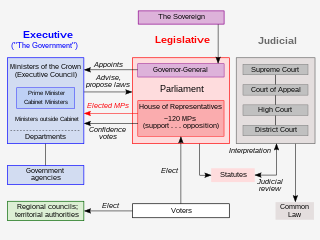 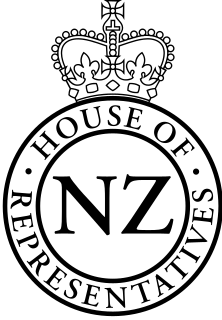 The Resource Management Act (RMA) passed in 1991 in New Zealand is a significant, and at times, controversial Act of Parliament. The RMA promotes the sustainable management of natural and physical resources such as land, air and water. New Zealand's Ministry for the Environment describes the RMA as New Zealand's principal legislation for environmental management.

The Electoral Commission is an independent Crown entity set up by the New Zealand Parliament. It is responsible for the administration of parliamentary elections and referendums, promoting compliance with electoral laws, servicing the work of the Representation Commission, and the provision of advice, reports and public education on electoral matters. The commission also assists electoral agencies of other countries on a reciprocal basis with their electoral events.

The Ministry for the Environment is the public service department of New Zealand charged with advising the New Zealand Government on policies and issues affecting the environment, in addition to the relevant environmental laws and standards. The Environment Act 1986 is the statute that establishes the Ministry.

The Official Information Act 1982 is a statute of the New Zealand Parliament which creates a public right of access to information held by government bodies. It is New Zealand's primary freedom of information law and an important part of New Zealand's constitutional framework.

The New Zealand Government is the central government through which governing authority is exercised in New Zealand. As in most parliamentary democracies, the term "Government" refers chiefly to the executive branch, and more specifically to the collective ministry directing the executive. Based on the principle of responsible government, it operates within the framework that "the Queen reigns, but the government rules, so long as it has the support of the House of Representatives". The Cabinet Manual describes the main laws, rules and conventions affecting the conduct and operation of the Government.

The judiciary of New Zealand is a system of courts that interprets and applies the laws of New Zealand. It has four primary functions: to provide a mechanism for dispute resolution; to deliver authoritative rulings on the meaning and application of legislation; to develop case law; and to uphold the rule of law, personal liberty and human rights.