The Ministerial and Other Salaries Act 1975 provides that at any one time there can be no more than 83 paid ministers (not counting the Lord Chancellor, up to 3 law officers and up to 22 whips). Of these, no more than 50 ministers can be paid the salary of a minister senior to a Parliamentary Secretary. Thus if 50 senior ministers are appointed, the maximum number of paid Parliamentary Secretaries is 33. [2] [3]

The position should neither be confused with the Permanent Secretary which is the most senior civil servant in a government department (also known as the Permanent Under-Secretary of State), nor with a Parliamentary Private Secretary (an MP serving as an assistant to a minister entitled to directly relevant expenses but no further pay). [1] [6]

Current Parliamentary Under Secretaries of State

The current Parliamentary Under Secretaries of State are: [8]

A similar position titled Parliamentary Under-Secretary is established by the Constitution Act 1986. [9] Unlike ministers in the New Zealand Government, parliamentary under-secretaries are not members of the Executive Council.

A sinecure is an office, carrying a salary or otherwise generating income, that requires or involves little or no responsibility, labour, or active service. The term originated in the medieval church, where it signified a post without any responsibility for the "cure [care] of souls", the regular liturgical and pastoral functions of a cleric, but came to be applied to any post, secular or ecclesiastical, that involved little or no actual work. Sinecures have historically provided a potent tool for governments or monarchs to distribute patronage, while recipients are able to store up titles and easy salaries.

The Chief Whip is a political office whose task is to administer the whipping system that tries to ensure that members of the party attend and vote as the party leadership desires.

A minister is a politician who heads a ministry, making and implementing decisions on policies in conjunction with the other ministers. In some jurisdictions the head of government is also a minister and is designated the ’prime minister’, ‘premier’, ’chief minister’, ’chancellor’ or other title.

A coalition of the Conservative and Liberal Unionist parties took power in the United Kingdom following the 1895 general election. Conservative leader Lord Salisbury was appointed Prime Minister and his nephew, Arthur Balfour, became Leader of the House of Commons, but various major posts went to the Liberal Unionists, most notably the Leader of the House of Lords, the Liberal Unionist Duke of Devonshire, who was made Lord President, and his colleague in the Commons, Joseph Chamberlain, who became Colonial Secretary. It was this government which would conduct the Second Boer War from 1899–1902, which was exploited by the government to help win a landslide victory at the 1900 general election.

A permanent secretary is the most senior civil servant of a ministry in the United Kingdom, charged with running the department on a day-to-day basis. Similar offices, often employing different terms, exist in many other Westminster-style systems and in some other governments. 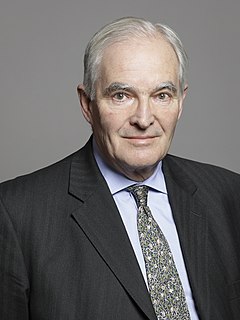 The Government of the United Kingdom, formally and commonly referred to as Her Majesty's Government, is the central government of the United Kingdom of Great Britain and Northern Ireland. The government is led by the prime minister, who selects all the other ministers. The prime minister and their most senior ministers belong to the supreme decision-making committee, known as the Cabinet.

The Cameron–Clegg coalition was formed by David Cameron and Nick Clegg when the former was invited by Queen Elizabeth II to form a new government, following the resignation of Prime Minister Gordon Brown on 11 May 2010 after the general election on 6 May. The UK's first coalition government since the Churchill caretaker ministry, it was led by Cameron with Clegg as Deputy Prime Minister, composed of members of both Cameron's Conservative Party and Clegg's Liberal Democrats.

The list that follows is the Liberal Democrats Frontbench Team/Shadow Cabinet led by Menzies Campbell from 2006 to 2007.

The second Blair ministry lasted from June 2001 to May 2005. Following the financial crisis in Japan at the end of the 1990s, there was a brief recession in other parts of the developed world including Germany, Italy and France in the early-2000s, but once again, the UK avoided recession and continued to enjoy a strong economy and low unemployment.