Last updated August 13, 2021
Nepalese mountain climber
This article is about the first Nepali woman to top Mount Everest. For the 2016 Adventer of the Year, see Pasang Lhamu Sherpa Akita.

She was born in a mountaineering family and was involved in climbing from her teens. She had successfully climbed Mount Blanc, Mount Cho Oyu, Mount Yalapic, Pisang Himal, and others. She had attempted to climb Mount Everest three times before, but did not succeed until April 22, 1993, when she reached the summit by the South Col via the Southeast Ridge route.

The morning of April 22, 1993 was bright and clear, and remained so until Pasang reached the top of the 8,848 m. peak with five Sherpas, Sonam Tshering Sherpa, Lhakpa Norbu Sherpa, Pemba Dorje Sherpa and Dawa Tashi Sherpa. Meanwhile, a member of the team and five-time Everest summitter Sherpa Sonam Tshering got seriously sick at south summit and, despite Pasang Lhamu's efforts to help, did not survive his illness. While descending from the summit, the weather, as often happens in the mountains, suddenly turned bad, causing her to lose her own life on the south summit. [2] Vladas Vitkauskas helped move her body down the mountain.

For achieving what no other Nepalese woman had achieved before her, Pasang Lhamu was posthumously honored by her country and mountaineers all around the world in various ways. She was the very first woman to be decorated with the "Nepal Tara (Star)" by the King of Nepal. The National Youth Foundation conferred the 1993-94 Youth Excellence Award on her. Similarly, in order to commemorate her feat, a life-size statue of Pasang Lhamu was erected at Bouddha, Chuchepati; a postage stamp was issued in her name; the Government of Nepal renamed Jasamba Himal (7,315 m) in the Mahalangur Range as Pasang Lhamu Peak; the Ministry of Agriculture named a special strain of wheat as Pasang Lhamu wheat; the Pasang Lhamu Memorial Hall was established in Dhulabari of Jhapa district in east Nepal; and the 117 km Trishuli-Dunche road was named the Pasang Lhamu Highway.

Sherpa is one of the Tibetan ethnic groups native to the most mountainous regions of Nepal, Tingri County and the Himalayas. The term sherpa or sherwa derives from the Sherpa language words ཤར shar ("east") and པ pa ("people"), which refer to their geographical origin of eastern Tibet.

Lakpa Gelu, often spelled Lhakpa, is a Nepalese Sherpa climber born in Jubing - 1, KhariKhola, Solukhumbu, Nepal. He is known for holding a world record for the fastest climbing of Mount Everest in only 10 hours 56 minutes and 46 seconds. Gelu's record-breaking trip was his tenth trip to the summit of the mountain.

Pemba Doma Sherpa was the first Nepalese female mountaineer to climb Mount Everest via its north face, was the second Nepali woman to summit from both the north and south faces, and is one of six women to have summited Everest twice. She was the leader of the 2002 Nepalese Woman Everest Expedition. Pemba Doma Sherpa climbed Cho Oyu from the Tibetan side on 28 Sep 2005.

Alison Levine is an American mountain climber, sportswoman, explorer and leadership consultant. She is the author of On the Edge and the executive producer of a documentary, The Glass Ceiling. She has ascended the highest peaks on every continent and also skied to both the North and South Poles. In 2010, she completed the Adventure Grand Slam by reaching the summit of Mount Everest. She serves as an adjunct instructor at the U.S. Military Academy. 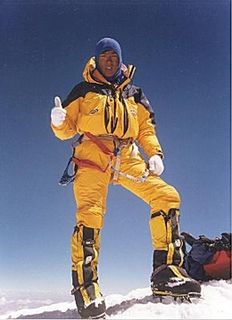 Chhurim is a Nepali mountaineer and the first woman to climb Mount Everest twice in the same season, a feat which was verified by the Guinness Book of World Records in 2013. She accomplished this feat in 2012, climbing Everest on May 12 and May 19 of that year.

Nimdoma Sherpa from Gauri Sankar, Dolakha District is a Nepalese mountain climber. In 2008 she became the youngest woman to climb Mount Everest and in 2009 she joined the Seven Summits Women Team, a team of Nepalese women whose goal is to climb the Seven Summits. 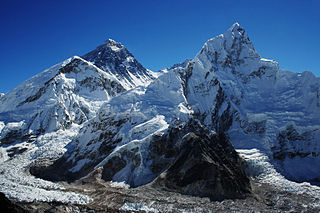 Asian Trekking is a commercial adventure company based out of Kathmandu, Nepal started by Sherpa Ang Tshering. In 2001, it was recorded that Asian Trekking ran 25 large mountain expeditions per year. Asian Trekking made international news when in 2006 four of its clients and two of its Sherpas died in a single season. One of their clients, David Sharp, died near the summit and this event became the center of an international climbing ethics controversy. Founder of the company Ang said that climbers can die if they use all their energy getting to the summit of Mount Everest, only to be too fatigued for the descent.

Lhakpa Sherpa is a Nepalese Sherpa mountain climber. She has climbed Mount Everest nine times, the most of any woman in the world. In 2000, she became the first Nepalese woman to climb and descend Everest successfully. In 2016, she was listed as one of BBC's 100 Women.

Dawa Yangzum Sherpa also known as Dawa Yangzum is a Nepali mountain climber and the first woman to become an international mountain guide from Nepal.

The 1965 Indian Everest Expedition reached the summit of Mount Everest on 20 May 1965. It was the first successful scaling of the mountain by an Indian climbing expedition.