Last updated October 25, 2021
Spanish politician
In this Catalan name, the first or paternal surname is Maragalland the second or maternal family name is Mira; both are generally joined by the conjunction "i".

Pasqual Maragall i Mira (Catalan pronunciation:  [pəsˈkwal məɾəˈɣaʎ] ;born 13 January 1941) is a Spanish politician and former President of Generalitat de Catalunya. [3] He had previously been Mayor of Barcelona,from 1982 to 1997,and helped run the city's successful Olympic bid. [4]

He was born in Barcelona in 1941 as the third of eight siblings. His grandfather was the Catalan poet Joan Maragall. In 1965,he married Diana Garrigosa,and he has two daughters and a son. He was an active member of the Workers' Front of Catalonia and joined the left-wing anti-Franco movement Popular Liberation Front. He studied law and economics at the University of Barcelona between 1957 and 1964.

In 1965,after his studies,he joined the Specialist Office of Barcelona City Council as an economist,work he combined with giving classes in economic theory at the Autonomous University of Barcelona,acting as assistant to the professor,Josep M. Bricall  [ ca ]. He also cooperated with the Studies Service of the Banco Urquijo  [ es ],run by Ramon Trias Fargas  [ ca ].

Between 1971 and 1973,he lived in New York City,where he gained a master of arts in economics from the New School University.

In 1973,he came back to Barcelona and returned to the Barcelona City Council and to the UAB,where he gave classes on urban economics and international economics as temporary assistant lecturer. One year earlier,he supported Convergència Socialista de Catalunya,one of the founding groups of the PSC. In 1978,at the Economics Faculty of the UAB,he presented his doctoral thesis The prices of urban land,The case of Barcelona (1948–1978). In 1978,he was a researcher and guest professor at the Johns Hopkins University in Baltimore. This university would later appoint him doctor honoris causa.

He joined the PSC electoral list in the first democratic municipal election for Barcelona City Council in 1979 and this party won the most votes at the ballot box. His friend Narcís Serra became Mayor while he became tinent d'alcalde (Deputy Mayor) for Administrative Reform,and later for Taxation. On 1 December 1982 he succeeded Narcís Serra as Mayor of Barcelona,since Serra was appointed minister of Defence by the new Socialist government of Felipe González. [5]

In 1986,Barcelona was chosen to host the 1992 Summer Olympics Accordingly,the city's mayor –Pasqual Maragall –presided over the organising committee (COOB'92). The Olympics provided the city with sorely needed infrastructure. Another Maragall initiative,the 2004 Universal Forum of Cultures,exhibited the same "top-down" approach. It is widely recognised,however,that the '92 Games helped Barcelona to redefine itself as one of the great cities of Europe. [6]

In 1997,Pasqual Maragall resigned as Barcelona's mayor and returned to university lecturing in Rome and New York City. However,he came back to active politics and was elected as the PSC-CpC candidate for the presidency of the Generalitat in the 1999 election.

In 2000,he was elected President of the Partit dels Socialistes de Catalunya (PSC-PSOE),and was a member of the Catalan Parliament from 1988 to 1995. From 1999 to 2003,he presided over the PSC-CpC parliamentary group.

On 16 December 2003,Maragall was elected President of the Generalitat by the Catalan Parliament after cliff-hanger negotiations with the ERC and ICV parties. He finally took office on 20 December. While generally popular as Mayor of Barcelona,Maragall's career as President of the coalition government was marked by a series of crises. [7] A particularly severe one involved Chief Councilor Carod's "secret" trip to France to unofficially negotiate with ETA. Others include:the stormy negotiations over a new Statute of Autonomy for Catalonia in which Maragall and the PSC hovered between a nationalist stance and giving in to the central government pressure;the collapse of an entire city block in Barcelona's Carmel district following poorly planned and executed tunnelling work;and a scheme –supported by Maragall's government –to build a tunnel for the AVE high-speed train under the shaky foundations of Barcelona's 19th-century city centre. In October 2005 Maragall met with objections regarding his plans for reshuffling the cabinet without consulting either his coalition partners or his party. The President's brother,Ernest Maragall,was tipped for a ministerial post in the reshuffle. Ernest,who held the post of Executive Secretary,was seen by critics as an apparatchik ,and whipped up a storm of protest in June 2005 when he opposed plans to make Catalonia's future anti-fraud department independent of the government. Pasqual Maragall's pledges to fight corruption and nepotism in public administration were one of the key planks in his 2003 campaign.

On 21 June 2006,Maragall announced that he would not be standing for reelection (see 2006 Catalan Parliament election). He offered his support to new President JoséMontilla amongst controversy over Montilla's non-Catalan heritage,stating that it did not make Catalonia "less Catalan",and later commented that "our new homeland is Europe". He later stated "our new path is the Mediterranean". [8] On 19 October 2007,it was announced that he would not pay his PSOE membership fee anymore,ending three decades of activity within the party. The following day,he announced that he had been diagnosed with Alzheimer's disease and that he was creating the Pasqual Maragall Foundation to fight against the illness.

In 2007 he founded the Catalunya Europa Foundation,which develops work inspired by the thought and political work of Maragall,including the active involvement of Catalan society in a more united Europe,the global role of cities as spaces for social transformation,and lasting dialogue between Catalonia,Spain and Europe. [9]

In 2017 a collection of essays edited by Jaume Claret,Pasqual Maragall:Pensament i acció,was published by RBA Libros. Academics and colleagues of the politician discuss the essential points of his career:the city and the region,his vision of Catalonia's place in Spain and in the world,government policies and the 1992 Olympic Games,among others.

In 2020,a documentary film directed by Josep M. Mañéand Francesca Català,Maragall i la Lluna,was released. [10] The documentary starts with the experience of Lluna,a girl who was eight years old when,in 1993,the then-mayor of Barcelona moved into her home to better understand the reality of the Roquetes neighborhood. Twenty-five years later,Lluna begins a search which starts with the memory of those days and leads her to discover Maragall through family members,acquaintances and politicians.

The Socialists' Party of Catalonia is a social-democratic political party in Catalonia,Spain,resulting from the merger of three parties:the Socialist Party of Catalonia–Regrouping,led by Josep Pallach i Carolà,the Socialist Party of Catalonia–Congress,and the Catalan Federation of the PSOE. It is the Catalan instance of the Spanish Socialist Workers' Party (PSOE),and its Aranese section is Unity of Aran. The party had also been allied with federalist and republican political platform Citizens for Change until the 2010 election. PSC–PSOE has its power base in the Barcelona metropolitan area and the comarques of Tarragonès,Montsià,and Val d'Aran.

Artur Mas i Gavarró is a Catalan politician from Spain. He was president of the Government of Catalonia from 2010 to 2015 and acting president from September 2015 to 12 January 2016.

Josep Bargallói Valls is a Spanish teacher and politician from Catalonia and the current Minister of Education of Catalonia. 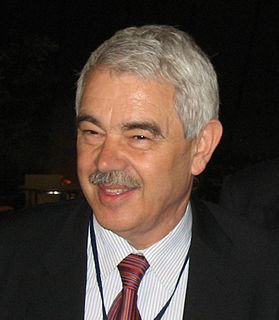 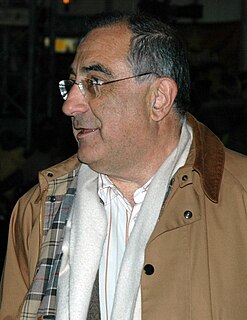 Joaquim Nadal i Farreras is a Spanish politician and historian from Catalonia. He is a professor at the University of Girona and was the Minister of Territorial Policy and Public Works of the Catalan Government,the Generalitat de Catalunya,from December 2003 to December 2010.

The 2003 Catalan regional election was held on Sunday,16 November 2003,to elect the 7th Parliament of the autonomous community of Catalonia. All 135 seats in the Parliament were up for election.

The politics of Catalonia tales place within the framework of its Statute of Autonomy,which grants a degree of self-government to Catalonia and establish it as an autonomous community of Spain with the statuts of a nationality,operating as a parliamentary democracy. The Generalitat de Catalunya is the Catalan institution of self-government,which includes the Parliament of Catalonia,the President and the Executive Council. 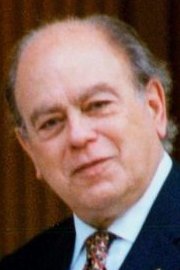 The 1999 Catalan regional election was held on Sunday,17 October 1999,to elect the 6th Parliament of the autonomous community of Catalonia. All 135 seats in the Parliament were up for election. 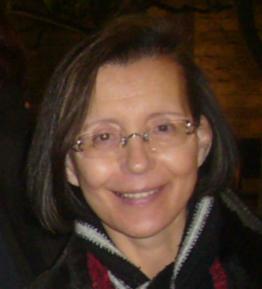 JoséMontilla Aguilera is a Spanish politician who is currently a member of the Spanish Senate. He was the 128th President of Generalitat de Catalunya. He became the First Secretary of the Socialists' Party of Catalonia on 18 June 2000,and a member of the Federal Executive Committee and the Federal Committee of the Spanish Socialist Workers' Party (PSOE) on 23 July 2000. He served as Minister of Industry,Tourism and Trade in the government of JoséLuis Rodríguez Zapatero from 18 April 2004 until 9 September 2006. He is married and has five children. On 29 November 2010 he announced he would not stand again for the post of First Secretary of the PSC due to his party's having obtained its worst-ever results in the 2010 election.

The 2006 Catalan regional election was held on Wednesday,1 November 2006,to elect the 8th Parliament of the autonomous community of Catalonia. All 135 seats in the Parliament were up for election.

Miquel Roca i Junyent is a Spanish lawyer and politician from Democratic Convergence of Catalonia. He is one of the Fathers of the Constitution in Spain.

Citizens for Change was a political platform in Catalonia created in 1999 to support Pasqual Maragall's bid to the presidency of the Government of Catalonia in order to put an end to the hegemony of Jordi Pujol's Convergence and Union after two decades in government. After Maragall's first and only term in office,CpC was reformed as a civic-political association. It contested the 1999,2003 and 2006 regional elections in alliance with the Socialists' Party of Catalonia (PSC). 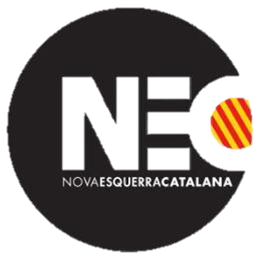 New Catalan Left was a Catalanist and pro-independence political party founded in December 2012 as a split from the Socialists' Party of Catalonia (PSC) by Ernest Maragall,brother of former Catalan president Pasqual Maragall. In November 2014,the party was merged into the Left Movement (MES). 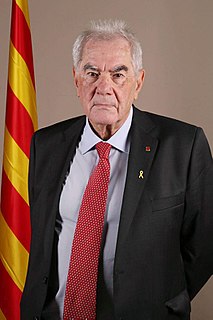 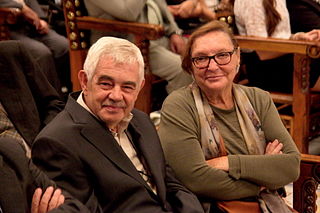 Joan Ignasi Elena i Garcia is a Spanish lawyer and politician from Catalonia,former member of the Parliament of Catalonia and the current Minister of the Interior of Catalonia.