Passages is an upcoming romance drama film directed by Ira Sachs starring Franz Rogowski, Ben Whishaw, and Adèle Exarchopoulos. It depicts a long-time male couple one of whom has an affair with a woman. [3] [4]

Benjamin John Whishaw is an English actor and producer. After winning a British Independent Film Award for his performance in My Brother Tom (2001), he was nominated for an Olivier Award for his portrayal of the title role in a 2004 production of Hamlet. This was followed by television roles in Nathan Barley (2005), Criminal Justice (2008) and The Hour (2011–12) and film roles in Perfume: The Story of a Murderer (2006), I'm Not There (2007), Brideshead Revisited (2008), and Bright Star (2009). For Criminal Justice, Whishaw received an International Emmy Award and received his first BAFTA Award nomination.

Tim Hecker is a Canadian electronic musician, record producer, and sound artist. He has become known internationally for experimental ambient recordings released under his own name, such as Harmony in Ultraviolet (2006) and Ravedeath, 1972 (2011). He has released nine albums and a number of EPs in addition to collaborations with artists such as Ben Frost, Jóhann Jóhannsson, Daniel Lopatin, and Aidan Baker. 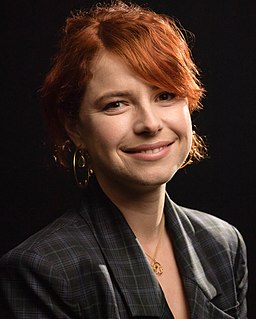 Jessie Buckley is an Irish actress and singer. A Royal Academy of Dramatic Art graduate, she began her career in 2008 as a contestant on the BBC TV talent show I'd Do Anything, in which she came second. The recipient of a Laurence Olivier Award, in addition to nominations for an Academy Award and three BAFTA Awards, she was listed at number 38 on The Irish Times' list of Ireland's greatest film actors of all time, in 2020.

Bright Star is a 2009 biographical romantic drama film, written and directed by Jane Campion. It is based on the last three years of the life of poet John Keats and his romantic relationship with Fanny Brawne. Campion's screenplay was inspired by a 1997 biography of Keats by Andrew Motion, who served as a script consultant.

Blues Busters is a 1950 comedy film directed by William Beaudine and starring The Bowery Boys. The film was released on October 29, 1950 by Monogram Pictures and is the twentieth film in the series.

Léa Hélène Seydoux-Fornier de Clausonne is a French actor. She began her acting career in French cinema, appearing in films such as The Last Mistress (2007) and On War (2008). Seydoux first came to attention after she won the Trophée Chopard and received her first César Award nomination, for her performance in The Beautiful Person (2008).

Blue Is the Warmest Colour is a 2013 romance film co-written, co-produced, and directed by Abdellatif Kechiche and starring Léa Seydoux and Adèle Exarchopoulos. The film follows Adèle (Exarchopoulos), a French teenager who discovers desire and freedom as an aspiring painter, Emma (Seydoux), enters her life. It depicts their relationship from Adèle's high school years to her early adult life and career as a schoolteacher. The film's premise is based on the 2010 graphic novel of the same name by Jul Maroh.

Adèle Exarchopoulos is a French actress. She is best known for her leading role as Adèle in Blue Is the Warmest Colour (2013), for which she earned international attention and critical acclaim; at the 2013 Cannes Film Festival, she became the youngest person in the history of the festival to be awarded the Palme d'Or. For her performance in Blue Is the Warmest Colour, she won the Los Angeles Film Critics Association Award for Best Actress, the César Award for Most Promising Actress, and the Trophée Chopard Award for Female Revelation of the Year, among dozens of other accolades.

Trophée Chopard is awarded by a jury of professionals to two young actors in order to recognise and encourage their career. It was founded in 2001 by Chopard and has since been presented every year during the Cannes Film Festival. 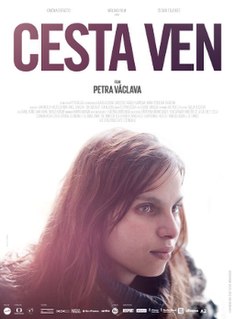 The Way Out is a 2014 Czech-French social drama film directed by Czech director Petr Václav. It premiered at the 2014 Cannes Film Festival. The film won seven Czech Lion awards, including selected Best Czech Film of 2014 and Best Director. According to Variety, The Way Out is a story of a "young gypsy woman trying to lead a 'normal' life [...] in a constant battle against prejudice and her own community's entrenched behavior." 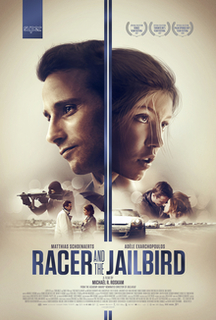 Racer and the Jailbird is a 2017 drama film directed by Michaël R. Roskam, starring Matthias Schoenaerts and Adèle Exarchopoulos. A gangster and a racing car driver fall in love, set against the background of a brutal crime gang in Brussels. It was selected to be screened out of competition at the 74th Venice International Film Festival in 2017. It was selected as the Belgian entry for the Best Foreign Language Film at the 90th Academy Awards, but it was not nominated. It received five nominations at the 8th Magritte Awards, including Best Flemish Film.

Franz Rogowski is a German actor and dancer. He has appeared in films directed by Michael Haneke, Christian Petzold and Terrence Malick. 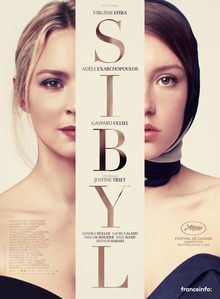 Sibyl is a 2019 comedy-drama film directed by Justine Triet and starring Virginie Efira, Adèle Exarchopoulos and Gaspard Ulliel, in his final film to be released theatrically during his lifetime. It was selected to compete for the Palme d'Or at the 2019 Cannes Film Festival.

Women Talking is an upcoming American drama film written and directed by Sarah Polley, based on the 2018 novel of the same name by Miriam Toews. 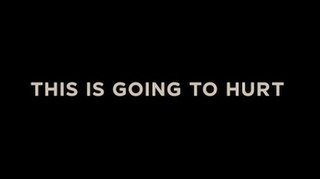 This Is Going to Hurt is a British medical comedy-drama television series, created by Adam Kay and based on his memoir of the same name. The show was co-produced by the BBC and AMC. It focuses on the lives of a group of junior doctors working on an obstetrics and gynaecology ward in a National Health Service hospital. It profiles their professional and personal lives and explores the emotional effects of working in a stressful work environment. The series closely follows the stories of Adam Kay and Shruti Acharya as they work through the ranks of hospital hierarchy. These characters both break the fourth wall and directly address viewers with dialogue. This Is Going to Hurt presents its stories with comedic and dramatic tones. The seven-part series premiered on BBC One and BBC iPlayer on 8 February 2022. It began airing on AMC+ in the United States on 2 June 2022.

Luzifer is a 2021 Austrian supernatural horror drama film written and directed by Peter Brunner. Starring Susanne Jensen and Franz Rogowski, the film centers on a man who lives in a secluded alpine hut with his mother and his pet eagle, their relative peace and faith shattered as strange and increasingly sinister supernatural occurrences begin to unfold around them.

The Five Devils is a 2022 French drama fantasy film directed by Léa Mysius, who wrote the screenplay with Paul Guilhaume. The film stars Adèle Exarchopoulos and Sally Dramé. It screened in the Directors' Fortnight section at the 2022 Cannes Film Festival on May 23, 2022.