Patricia Ethell McDonald (1 August 1921 [1]  – 10 March 1990) was an Australian radio actress and actress of stage and television and the daughter of one of Australia's most prominent electric radio engineers and public servants, Arthur Stephen McDonald and his wife, milliner Edith Roseina Ethell. [2] Her grandfather, bootmaker John McDonald, was born in Victoria, and married Eliza Mary Stevenson. [3]

McDonald was best-known for two long-running soap opera roles. She played comical malaproping gossip Dorrie Evans in the popular serial Number 96 between 1972 and 1977 and then played Aunty Fiona Thompson in Sons and Daughters between 1981 to 1987. She was featured in both shows throughout their entire run-about five and a half years in each case. McDonald won four Logie awards, including the 1974 Gold Logie, for her work on Number 96.

McDonald was born in 1921, and at the age of 18 acted in the 1939 Australian film Seven Little Australians based on the novel by English children's literary writer Ethel Turner she played the twenty-year-old stepmother Esther. She much later appeared in an episode of the 1971 police drama The Long Arm . The role in Number 96 followed; she reprised the role in the 1974 feature film version of the series. McDonald won several Logie Awards as Best Actress for playing Dorrie, and a Gold Logie for Australia's most popular female personality in 1974. After Number 96 she played a regular role in the short-lived Australian situation comedy series The Tea Ladies (1978).

One of McDonald's final TV appearances was at the Logie Awards on 17 March 1989, when she took part in a production number called "Golden Girls", which celebrated female Gold Logie winners of years past. She performed the song with Lorrae Desmond, Hazel Phillips, Denise Drysdale, Jeanne Little, and Rowena Wallace.

McDonald apart from being a staple of film and television since the late 1930s, had also been a regular theatre performer from 1940 until 1989 [4] .Later in 1989 McDonald appeared in an episode of the hit British TV series In Sickness and in Health in which she played Raeline's mother. The episode was aired in the UK in October 1989.

McDonald was married in 1941 to Captain Peter Hendry, a son of a reverend and doctor in the Australian Army. [5]

During the 1970s she was involved in a live-in lesbian relationship with Number 96 co-star Bunney Brooke. The two actresses openly appeared in magazine articles about the suburban Sydney home they shared, and they freely discussed their international summer holidays together in press articles, although the true nature of the relationship was not explicitly stated. [6]

McDonald died after a lengthy illness of cancer of the pancreas in North Shore, Sydney, [7] on 10 March 1990, aged 68. Her partner actress and casting agent Bunney Brooke later died in April 2000.

Number 96 is a 1970s Australian television soap opera/serial set in a fictional, four-storey, inner city apartment block at 96 Lindsay Street, Paddington, hence the title. Creators Don Cash and Bill Harmon of the Cash Harmon Television production company, produced the series for what was then known as the 0–10 Network, which had requested a similar type of series to the high-rating English soap opera series Coronation Street and specifically one that explored mature subject matter. The premise, original story outlines, and original characters were devised by David Sale, who also wrote the scripts for the first episodes and continued as scriptwriter for much of the show's run. A then-vacant building at 83 Moncur Street, Woollahra, was used as the exterior, establishing shot of the block of flats whilst the majority of filming was carried out on the set built at Channel Ten's studio in Lane Cove, Sydney. Though the series was not the first soap opera in Australia, it was the first to gain a cult following both locally and internationally. When the series started, its cast was one of the largest ever assembled for a local production. Upon its demise, after 1218 episodes, it was the longest running soap opera ever produced in Australia, before being surpassed by the Nine Network program The Young Doctors. Storylines explored the relationships of the residents of the four-storey apartment block.

Georgina Parker is a two-time Gold Logie award-winning Australian television soap actress and has also appeared in film and theatre. She is best known for her acting roles in Australian soap operas; as Lucy Gardiner in A Country Practice; as Theresa "Terri" Sullivan in All Saints; and as Roo Stewart in Home and Away. Parker is the second actress to play Roo Stewart.

Abigail Rogan is a retired English-born Australian character actress particularly of television soap operas and film and was also briefly a vocalist. She emigrated from London in 1968 and became one of Australia's significant sex symbols of the early-1970s.

Ruth Winifred Cracknell AM was an Australian character and comic actress, comedienne and author, her career encompassing all genres including radio, theatre, television and film. She appeared in many dramatic as well as comedy roles throughout a career spanning some 56 years.

The 17th Annual TV Week Logie Awards were presented on Friday 7 March 1975 at Southern Cross Hotel in Melbourne and broadcast on the Nine Network. It was the first time the Awards were telecast in Colour. Bert Newton from the Nine Network was the Master of Ceremonies. American film star John Wayne and television actors Lee Majors and William Conrad, British actor Edward Woodward and his wife Michele Dotrice, and Australian-born British television stars Keith Michell and Diane Cilento appeared as guests. Each of the guest presenters were given special souvenir Logies.

The 19th Annual TV Week Logie Awards were presented on Friday 25 March 1977 at Southern Cross Hotel in Melbourne and broadcast on the Nine Network. Bert Newton from the Nine Network was the Master of Ceremonies. American film star Burt Lancaster and television actors Lawrence Hilton-Jacobs, Susan Seaforth and Bill Hayes, British actors Robin Nedwell and Geoffrey Davies, and Australian actor Jack Thompson appeared as guests. Kate Jackson, star of Charlie's Angels, was scheduled to appear but cancelled at the last minute to start filming on the television movie James at 15. 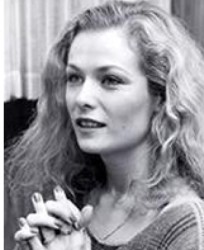 Megan Williams was an Australian actress and singer, who played a continuing role as Alice Sullivan in the television drama The Sullivans, and won a Logie Award for her work in Anzacs (1985).

Frances Hargreaves was an Australian actress, who became famous in the 1970s through her long-running role of Marilyn McDonald in soap opera Number 96.

Ronald Ernest McMurtry, professionally known as Ron Shand and earlier in his career as Ronnie McMurtry, was Australian actor and comedian who worked extensively in numerously genres of the show business industry including, circus, soft shoe, theatre, cabaret, revue vaudeville, radio, television and film. Shand was also a recording artist. He started his career in vaudeville in Perth, he was probably best known however for his role in television soap opera Number 96 as Herbert "Herb" Evans.

Nicolle Dickson is a former Australian actress, who was best known for playing the original character of teenage tearaway Bobby Simpson in soap opera Home and Away from 1988 to 1993. She left the acting profession and is now an accountant and bookkeeper.

Wendy Blacklock AM is a retired Australia-based theatre, radio and television actress, producer, writer and choreographer and theatre entrepreneur, who is best known for her long-running role of comedy character dizzy Edith "Edie" MacDonald, often referred to as Mother or Mummy in the 1970s television soap opera Number 96: a suburban housewife with a fondness for gin, daytime soap operas and analgesics. She is a theatrical entrepreneur, who founded her own company "Performing Lines" to help nurture, produce and showcase new productions and Australian talent for stage in 1990, which she ran for 21 years, her small theatre museum features the alumni of Australian entertainment including Graham Kennedy, Jill Perryman and Gordon Chater.

Dorothy Cronin, professionally known as Bunney Brooke, was an Australian actress, creator, producer, director, designer, playwright and casting agent, best known for her being one of the early faces of Australian television. Known for her television, movie, theatre acting and comedy roles including the long-running role of Flo Patterson in the soap opera and movie release version of Number 96 in the 1970s, and in her later years to a new generation of viewers in her role as Helen "Nell" Rickards in children's series Round the Twist and her role as Violet "Vi" Patchett in E Street (1990).

Joyce Mary Jacobs was an English-born Australian character actress,and comedienne who had a successful career on the small screen, in soap opera and serials, after immigrating there from her native England in 1962. She remains best known for her portrayals of elderly gossips with a stint as Muriel Palmer in The Young Doctors and her permanent long running role as Esme Watson on soap opera A Country Practice, who after 12 years and 805 episodes at the time one of the longest roles on Australian television, normally appearing on screen alongside fellow veteran actors Syd Heylen and Gordon Piper, although unlike the latter actors who were written out of the series toward the end of its run on Network Seven to make way for a younger revamped cast, she was retained in the series when it switched to Network Ten.

Lorrae Desmond MBE born as Beryl Hunt and also credited as Sheila Hunt, is an Australian retired Gold Logie-award-winning singer, character actress, television presenter and theatre lyricist, with a career that has spanned over 50 years both locally and internationally. She started her career in England, where she was tipped to be the next Joy Nichols, a fellow Australian who had enormous success in England as a singer, radio personality and actress. Lorrae, having arrived in the country carved out a career as a variety performer, as a singer and radio/television presenter, primarily at the BBC, where she had her own shows during the years of World War II, after returning to Australia she became a popular presenter and remains best known to early local television audiences as hostess of the self-titled musical variety program The Lorrae Desmond Show from 1960 until 1964,. She was subsequently asked to tour Vietnam with the Entertainment Unit during the Vietnam conflict, where she became known for her live singing performances, billed as a forces sweetheart, in the style of Vera Lynn and Anne Shelton. She starting taking roles in local in soap opera from the late 1960s in local including a guest role in Crawford Productions staple series Homicide, before a guest role as Marion Carlton in Number 96, after which she was given before the permanent role as Molly Sparks in the ill-fated series Arcade in 1980, but became famous for her long-running role as Shirley Dean Gilroy an original character in the television series A Country Practice, for 816 episodes from 1981 to 1992, after ACP she briefly guested in Home and Away as Isobel Dupre in 1997. She retired from the small screen in 1999 aged 70, but has worked as a theatre lyricist, writing the play Honey in 2001, based on the novel Smoky Joe's Cafe by the author Bryce Courtenay.

Chantal Contouri is a Greek Australian television and film actress and former dancer, best known for her role in the 1970s soap opera Number 96, as nurse Tracy Wilson, later revealed to be the serial killer known as the infamous "pantyhose strangler".