Theophilos (also spelled Theofilos or Theophilus) was elected unanimously on 22 August 2005 by the Holy Synod of Jerusalem as the 141st primate of the Orthodox Church of Jerusalem to succeed the deposed Irenaios I. His election was confirmed by the Eastern Orthodox synod of Constantinople, and was endorsed by Jordan on 24 September 2005, as one of the three governments whose endorsement is required. [2] He was enthroned on 22 November 2005, despite Israeli objection. Theophilos had previously petitioned the Israeli government for recognition of the election. [3] The Israeli government officially recognised his election on 16 December 2007.

Theophilos is regarded as having been more favorable to his deposed predecessor, which may assist him in bringing stability to the troubled patriarchate as Irenaios's supporters may thus unite around him and make peace with the synod. Upon his election, Theophilos said, "In the last few months we have had a lot of problems but with the help of God we will overcome them." [4]

Theophilos was formerly the Eastern Orthodox Archbishop of Tabor.

Theophilos was born Ilias Giannopoulos in Gargalianoi, Messenia, Greece on 4 April 1952 to parents Panagiotes and Triseugenia. In 1964, Ilias moved to Jerusalem. [5]

He served as archdeacon for then-patriarch Benedict I of Jerusalem. From 1991 to 1996, he was a priest in Kafr Kanna in Galilee, which had a predominantly Israeli Arab Christian community, there he also formed a society called "Nour al Masih" ("Light of Christ") to spread the Orthodox Christian faith throughout the region.

Theophilos studied theology at the University of Athens. He went on to complete an MA from Durham University, graduating in 1984 as a member of Castle. [6] He has studied at Hebrew University in Jerusalem. Besides his native Greek, he also speaks English, Arabic and Hebrew.

In 1996, he was one of the first Christian clergymen in centuries to make an opening into the closed Wahhabi Islamic society of Qatar, an area historically[ citation needed ] under the jurisdiction of the Orthodox Church of Jerusalem where many Palestinian Arab migrant workers live today, a considerable number of them Orthodox Christians. He subsequently served as Exarch of the Holy Sepulchre in Qatar.

Before becoming patriarch, Theophilos served for a short time as the Archbishop of Tabor, consecrated to the episcopacy by Irenaios in February 2005.

He was officially enthroned as Patriarch of Jerusalem and All Palestine [7] on November 22, 2005. Delegates from all of the Orthodox Churches as well as high secular dignitaries were in attendance, including the President of Greece, and senior officials representing the governments of Palestinian National Authority, Jordan and Qatar, as well as diplomats and military officials. [8]

The official title of the Patriarch of Jerusalem is:

His Most Godly Beatitude, the Patriarch of the Holy City of Jerusalem and all Palestine, Israel, Syria, Arabia, beyond the Jordan River, Cana of Galilee, and Holy Zion, Theophilus III 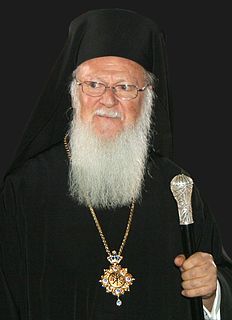 The ecumenical patriarch is the archbishop of Constantinople–New Rome and ranks as primus inter pares among the heads of the several autocephalous churches that make up the Eastern Orthodox Church. He is regarded as the representative and spiritual leader of Orthodox Christians worldwide. The term ecumenical in the title is a historical reference to the Ecumene, a Greek designation for the civilised world, i.e. the Roman Empire, and it stems from Canon 28 of the Council of Chalcedon.

Nectarius of Jerusalem, born Nikolaos Pelopidis, was the Greek Orthodox Patriarch of Jerusalem from 1661 to 1669. 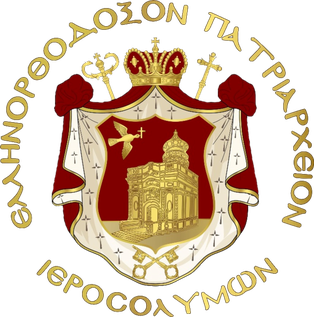 Irenaios Skopelitis was the 140th patriarch of the Eastern Orthodox Patriarchate of Jerusalem from 2000 to 2005, though the dismissal was disputed.

Metropolitan Cornelius of Petra is a senior bishop of the Eastern Orthodox Patriarchate of Jerusalem. He was locum tenens of the Church in 2001, following the death of Patriarch Diodoros I. He served as locum tenens again from 30 May 2005, after the deposition of Irenaios I on 6 May, until the election of Theophilos III on 22 August.

The Holy Synod of Jerusalem is the senior ruling body of the Greek Orthodox Patriarchate of Jerusalem and the Brotherhood of the Holy Sepulcher. 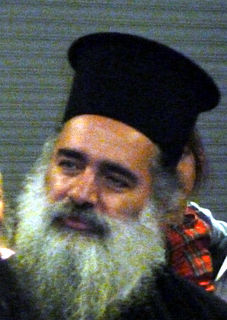 Theodosios (Hanna) of Sebastia is the Archbishop of Sebastia from the Greek Orthodox Patriarchate of Jerusalem. He is often named in Western news sources as Atallah Hanna, Atallah and Theodosios both meaning "gift of God" in Arabic and Greek, respectively. Theodosios, who was ordained on the 24 December 2005 at the Church of the Holy Sepulchre, is the second Palestinian to hold the position of archbishop in the history of the diocese. 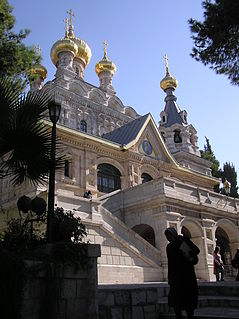 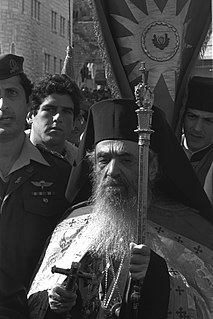 The Greeks have a long presence in Israel, predating the modern state. Greek expatriates form most of the leadership of the Eastern Greek Orthodox Church in the country. 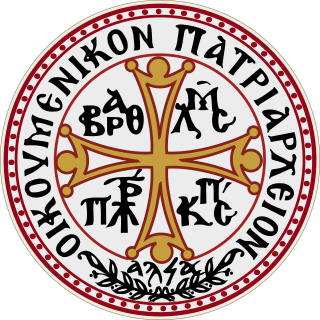