Patrick Musimu (12 October 1970 – 21 July 2011) was a Belgian freediver, sport business manager, marketing and event manager, and physiotherapist. He was born in Kinshasa, Zaire. On 30 June 2005, he beat the previous "No Limits" world record in freediving by almost 40 meters by diving to 209 meters. Following his request, this dive was done without the supervision of the International Association for Freediving agency, from which Musimu dissociated since 2002. According to him, extreme deep freediving should not be considered as a sport but as an adventure.

Musimu began diving in 1999 at the age of 28, intrigued by what he called "dolphin-men". His secret lay in years and years of training and preparation, but special attention should be given to his ear clearing technique: instead of equalizing his ears by the regular maneuvers, he flooded his air spaces (sinus and middle ears) with seawater before reaching the depth where ordinary equalization would become hard. He had a lung capacity of 9 litres and could hold his breath for more than 8 min 33 sec. In Stan Lee's Superhumans, a show on the History Channel, Musimu claimed meditation and yoga to be the reason behind his apparent powers of holding breath.

On 21 July 2011 Musimu died while pool training alone in Brussels, Belgium and was found by his wife and daughter. [1] [2]

Jacques Mayol was a French diver and the holder of many world records in free diving. The 1988 film The Big Blue, directed by Luc Besson was inspired by his life story and that of his friend, Enzo Maiorca. Mayol was one of the screenwriters and authored the book Homo Delphinus: the Dolphin Within Man of his philosophy about the aquatic origins of humans.

Loïc Leferme was a French diver who was the world free diving record holder until 2 October 2005, when he was surpassed by Herbert Nitsch. Loic was also a founder of AIDA in 1990 with Roland Specker and Claude Chapuis in Nice. In 2002 he set the world free diving record without any breathing apparatus at 162 meters. His first world record was 137 meters (1999). On 30 October 2004, he extended his own world record to 171 meters in the no limits free-diving category. The premier advocate of this type of freediving which has come to be known as Chapuis Style Freediving. 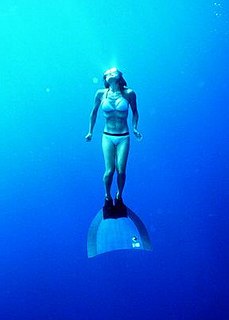 Natalia Vadimovna Molchanova was a Russian champion free diver, multiple world record holder, and the former president of the Russian Free Dive Federation. She has been described as "possibly the world’s greatest freediver".

Francisco Rodriguez, better known as Francisco 'Pipin' Ferreras is a Cuban free-diver known for his achievements in deep free diving and his relationship with his wife, Audrey Mestre.

Martin Štěpánek is a world class freediver and record-holder. From 1984 to 1997 he was a competitive monofin swimmer (finswimmer). Martin's academic background follows a degree in Forestry Engineering with advanced studies in Sports Biology at the Charles University in Prague, Czech Republic. After moving to the United States he became USA Certified as a Deep Sea and Saturation Commercial Diver in May 1999. In 2000 Martin met Douglas Peterson, who went on to become his freediving coach and mentor, guiding him to his first World Record in July 2001. Since then, Martin continued to set freediving world records annually up to his retirement from competitive freediving in 2012. He is now recognized as one of the pioneers of modern freediving education.

William Trubridge is a world champion and double world record holding freediver from New Zealand. He was born in the UK but moved to New Zealand when he was 18 months old.

Dave Mullins is a New Zealand freediver and world record-holder.

Deborah Andollo is a Cuban free-diving athlete who held several world records in different disciplines. Her nicknames "Neptune's Girlfriend", "Queen of the Caribbean" or "Mermaid of the Deep" associate her with the sea and her passion for the environment, as well as a sustainable relationship between man and nature. She is currently married and is mother of a son named Ernesto. She is also engaged in an audiovisual project, teaches diving, and is involved in the ecological movement and environmental education.

Skandalopetra diving dates from ancient Greece, when it was used by sponge fishermen, and has been re-discovered in recent years as a freediving discipline. It was in this discipline that the first world record in freediving was registered, when the Greek sponge fisherman Stathis Chantzis dived to a depth of 83 m. It consists of a variable ballast dive using a skandalopetra tied to a rope. A companion on a boat recovers the diver by pulling the rope up after the descent, and keeps a watch on the diver from the surface.

Stig Åvall Severinsen is a Danish freediver. He is a four-time world freediving champion and holder of multiple Guinness World Records. He wrote Træk Vejret – mere energi, mindre stress (2009), published in English in 2010 as Breatheology – The Art of Conscious Breathing.

Goran Čolak is a Croatian free-diver.

Nataliia Zharkova is a 2017 freediving champion of Europe and Ukraine. Zharkova holds multiple records in the discipline of freediving. She also is a freediving runner-up champion of the world, 2013. She is the first Ukrainian and the second woman to ever dive below the arch of the Blue Hole vertical underwater cave in Dahab, Egypt, on a single breath.