Patrick Süskind (born 26 March 1949) is a German writer and screenwriter, known best for his novel Perfume: The Story of a Murderer , first published in 1985.

Süskind was born in Ambach by Starnberger See, near Munich in Germany. His father was writer and journalist Wilhelm Emanuel Süskind, who worked for the newspaper Süddeutsche Zeitung and is famous as the co-author of the well-known publication Aus dem Wörterbuch des Unmenschen (From the Dictionary of an Inhuman), [1] a critical collection of essays concerning the language of the Nazi era. Patrick Süskind went to school in Holzhausen, a small Bavarian village. His mother worked as a sports trainer; his older brother Martin E. Süskind is also a journalist. Süskind has many relatives from the aristocracy in Württemberg, making him one of the descendants of the exegete Johann Albrecht Bengel and of the reformer Johannes Brenz.

After his qualification testing for university and his mandatory community service, he studied medieval and modern history at the University of Munich and in Aix-en-Provence from 1968–1974, but never graduated. [2] Funded by his parents, he relocated to Paris, where he wrote "mainly short, unpublished fiction and longer screenplays which were not made into films". [3]

During 1981, he had his first major success with the play Der Kontrabaß (The Double Bass), which was conceived originally as a radio play. During the theatrical season of 1984–85, the play was performed more than 500 times. The only role is that of a tragi-comical orchestral musician. During the 1980s, Süskind was also successful as a screenwriter for the television productions Monaco Franze (1983) and Kir Royal (1987), among others. For his screenplay of Rossini  [ de ], directed by Helmut Dietl, he won the Screenplay Prize of the German Department for Culture during 1996. He rejected other awards, like the FAZ-Literaturpreis, the Toucan Prize, and the Gutenbergpreis.

His best-known work is the internationally acclaimed bestseller Perfume: The Story of a Murderer (1985). This was made into a movie in 2006 by Tom Tykwer. Perfume was on the bestselling list of the German weekly news magazine Der Spiegel for nine years. He is also the author of a novella, The Pigeon (1988), The Story of Mr. Sommer (1991), Three Stories and a Reflection (1996), and a collection of essays, On Love and Death (2006).

Süskind lives as a recluse in Munich, in Seeheim (Lake Starnberg), and in France at Montolieu. The public knows little about him; he has withdrawn from literary society and does not grant interviews or allow himself to be photographed. 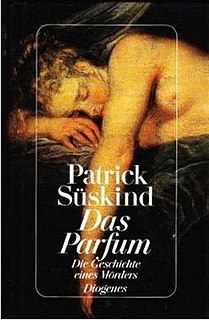 Perfume: The Story of a Murderer is a 1985 literary historical fantasy novel by German writer Patrick Süskind. The novel explores the sense of smell and its relationship with the emotional meanings that scents may have. 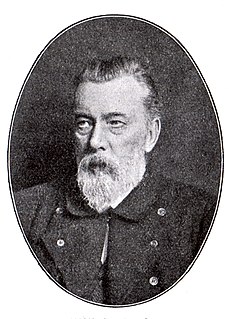 Wilhelm Hermann Jensen was a German writer and poet.

Bernd Eichinger was a German film producer, director and screenwriter.

Wilhelm Emanuel Süskind was a German writer, journalist and translator.

Bavaria Film in Munich, Germany is one of Europe's largest film production companies, with some 30 subsidiaries. 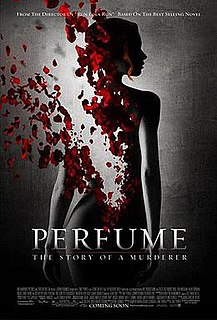 Perfume: The Story of a Murderer is a 2006 German period psychological thriller film directed by Tom Tykwer and starring Ben Whishaw, Alan Rickman, Rachel Hurd-Wood, and Dustin Hoffman. Tykwer, with Johnny Klimek and Reinhold Heil, also composed the music. The screenplay by Tykwer, Andrew Birkin, and Bernd Eichinger is based on Patrick Süskind's 1985 novel Perfume. Set in 18th century France, the film tells the story of Jean-Baptiste Grenouille (Whishaw), an olfactory genius, and his homicidal quest for the perfect scent. 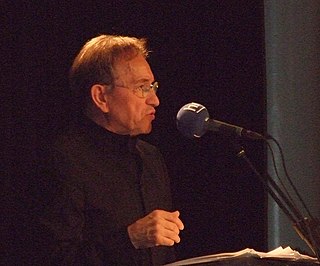 Walter Renneisen is a German actor. After engagements at the Schauspielhaus Bochum, Theater Dortmund and Staatstheater Darmstadt, he has worked freelance. He founded a touring theatre company in 1977. 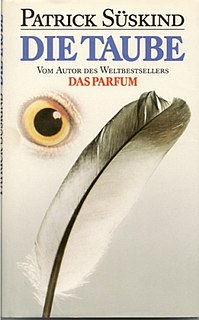 The Pigeon is a novella by Patrick Süskind about the fictional character Jonathan Noel, a solitary Parisian bank security guard who undergoes an existential crisis when a pigeon roosts in front of his one-room apartment's door, prohibiting him entrance to his private sanctuary. The story takes place in the span of one day, and follows how this seemingly insignificant event compounds to threaten Noel's sanity. The titular pigeon can be a symbol for disorder intruding on the protagonist's meticulously organized existence, and may be seen as similar to U.S. writer Edgar Allan Poe's 1845 poem The Raven, which features its titular bird perched over its protagonist's door instead of M. Noel's pigeon. This book is Süskind's followup to his nine-year bestselling first novel, Perfume.

Will Vesper was a German author and literary critic. 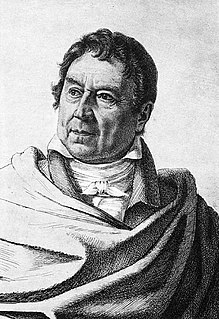 Christian Gottlob Keyser was a Lutheran missionary of the Neuendettelsau Mission Society. He served for almost 22 years at the Neuendettelsau Mission Station in the Finschhafen District of New Guinea, which had been founded in 1892 by Johann Flierl. He controversially proposed the evangelization of tribes, rather than individuals, the concept known as Volkskirche. An avid linguist, he compiled one of the first dictionaries of a Guinean dialects: Dictionary of the Kâte Language, a Papuan community. He also maintained a regular correspondence with the German Geographical Society in Berlin, reporting on his naturalist findings in New Guinea. He published his memoirs (1929), as well as over 300 essays and pamphlets and ten books. An intrepid explorer, he ascended the Saruwaged Range massif in 1913.

Axel Siefer is a German actor.

Der Kontrabaß is a play by Patrick Süskind. The monologue in one act premiered in 1981.

Die Wandlung was a monthly newspaper published in Heidelberg between November 1945 and Autumn 1949. "Die Wandlung" has no direct equivalent in English, but the gerund "The Changing" conveys the meaning sufficiently.

Manfred R. Köhler born March 8, 1927 in Freiberg, Germany died 1991 was a German dubbing director who graduated to being a screenwriter and film director specialising in action films and popular entertainment in the 1960s. He was billed with his middle initial to differentiate himself between the cinematographer and actor Manfred Köhler.

Gerhard Storz was the son of a Lutheran pastor from Württemberg who at various stages distinguished himself in theatre productions, as a scholar, an educationalist, a politician and an author-journalist, sometimes pursuing one career at a time and sometimes several in combination. Throughout his adult life he liked to see himself as a "language therapist". "Human speech seems to have been encoded, sealed into formulaic structures, and pressed into service for mechanistic operations", he once wrote.

Aus dem Leben eines Taugenichts is a novella by Joseph von Eichendorff. Completed in 1823, it was first printed in 1826. The work is regarded as a pinnacle of musical prose. Eichendorff created an open form with epic and lyrical elements, incorporating several poems and songs in the text. It was freely translated to English as Memoirs of a Good-for-Nothing, first published in 1866.

Perfume is a German television series produced for ZDFneo that was released on November 14, 2018. The series is both inspired by the novel of the same name by Patrick Süskind and the 2006 film Perfume: The Story of a Murderer by Tom Tykwer but is set in the modern day. Netflix acquired worldwide airing rights outside of German-speaking Europe for the crime series. The series was released on Netflix on December 21, 2018. Netflix cannot show the series in Germany because of its co-production with ZDF. In general, the international reviews have been very positive.